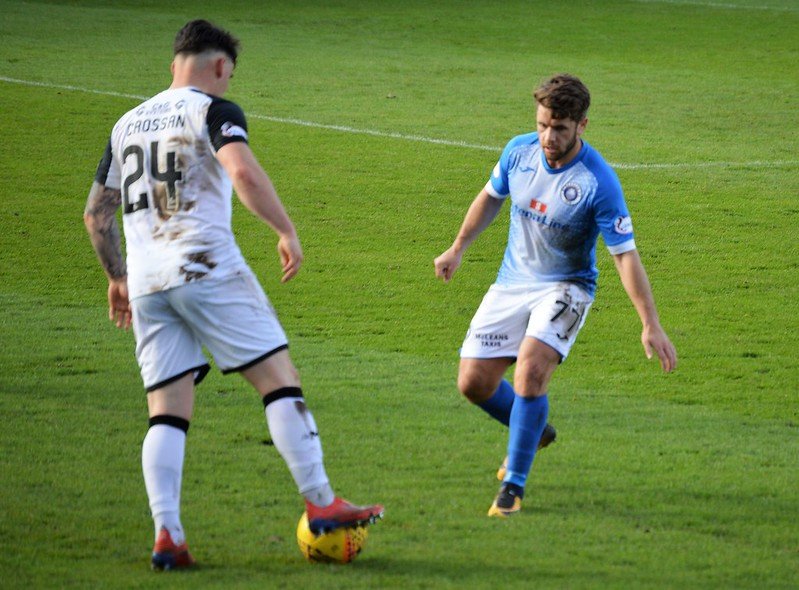 Stevie Farrell is keen to ensure Stranraer are not simply there to make up the numbers in the play-offs.

The Blues secured their spot in the end of season showdown with a 2-1 victory over Edinburgh City on Tuesday night.

However, the manager stressed there was no celebrating in the Stair Park dressing room because it is not yet mission accomplished.

Stranraer welcome Dumbarton down the A77 on Saturday for the first time since October 2019.

Farrell said: “We always believed we would be in the play-offs and so it proved.

“When we got the win on Tuesday night, we saw that as the first part of our job.

“Now we are in the play-offs and the next part of the job is to go and win the semi-final.

“We are not looking ahead to any final.

“We have got two legs against Dumbarton and we have got to try to be at our very best to make sure we get through to a play-off final.”

The winners of Stranraer versus Dumbarton will take on the winners of Edinburgh City versus Elgin City, with the first leg next weekend.

After 22 league fixtures, attention turns to knockout football and the challenges that brings.

The manager said: “You are now going into cup football effectively.

“Cup football is always exciting and you have games with real meaning and you don’t have many opportunities to put any wrong right.

“In the league, you have always got the next game.

“The next two games are obviously everything in terms of getting to that final.

“It’s an old cliché but it is true – and Jim Duffy will say the same thing – it’s impossible to win the tie and be in the final after the first leg but you can go a long way to losing it.

“You do need to manage both games and the first leg is always going to have an emphasis and have an importance on the second leg.”

Farrell has almost a full squad to choose from for the vital tie.

Grant Gallagher, who was on the bench for the victory over Edinburgh City, is once again available and could face his former side.

Meanwhile, Lewis McIntyre is also among the options as is the returning Matty Yates, with only Adam Cummins on the sidelines.

The manager said: “Hopefully, having them back for the next two games is just going to strengthen us.

“Having them back is a big plus.”

Two late strikes ultimately meant the spoils were shared at the C&G Systems Stadium at the end of 2019.

Both teams had chances in the first half, with Jordan Allan and Connor McManus coming close for the Blues while Ryan McGeever almost scored with a header for the hosts.

The two goals would come in the final five minutes of the game. Max Currie could not hold Joe McKee’s shot and Ryan Tierney was on hand to score. However, Stranraer battled back to secure a deserved point when James Hilton looped a header over Conor Brennan.

Chris Graham was the man in the middle when Stranraer lost 4-1 away to Montrose in March 2020, with an Allan Fleming own goal providing the Blues’ consolation that day.

It was November 2019 when the referee last took charge of an away game involving Dumbarton. Goals from Joe McKee and Isaac Layne helped them to a 2-1 win over Clyde.

Mr Graham has been in charge of one Dumbarton game this season. Peterhead were the visitors with Ben Armour scoring the only goal.

Our special playoff edition of Beyond the Bandstand is available now, priced at £3 + P&P.

The issue features Blues winger Andy Stirling on the cover and is packed with our regular features.

We’re live on Saturday (3pm) for the first leg of our playoff semi final against Dumbarton, as we look to book our place in League 1 for next season.

You can watch all the action from Stair Park for £7.99.

Please note: season subscriptions are not valid for playoffs.

Hope ahead for Faz