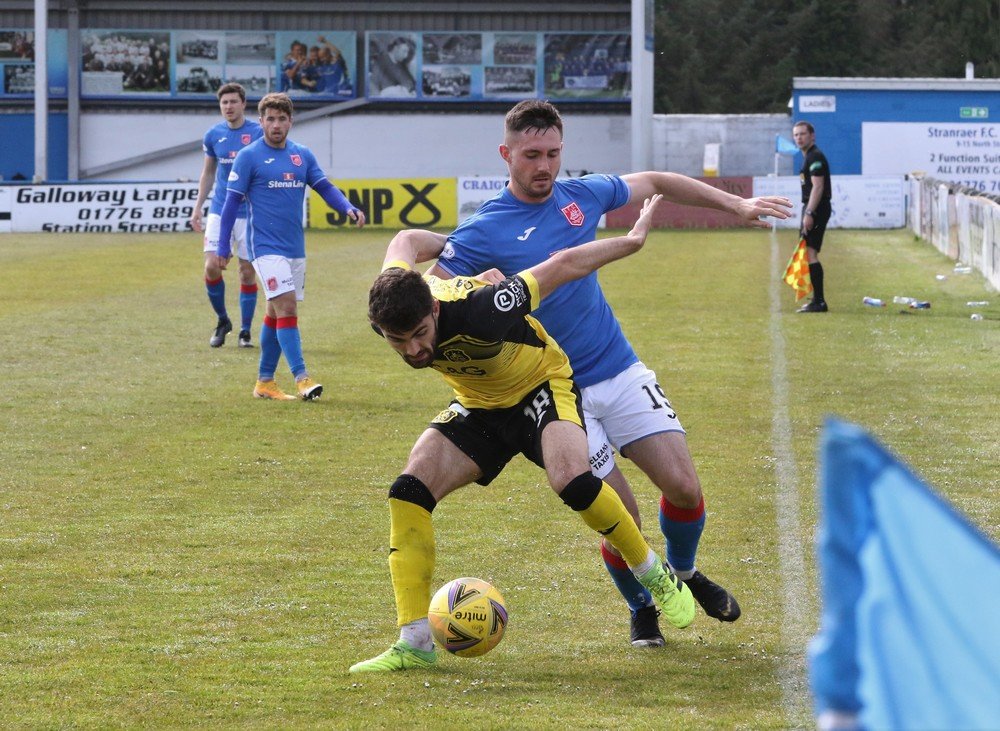 Stranraer’s chances of a return to League One remain finely balanced after a stalemate with Dumbarton.

Neither team could find a way through in the first leg of the play-off semi-final.

Defences were on top for much of the encounter, with neither team truly calling either goalkeeper into action.

Stevie Farrell was without the defensive trio of Grant Gallagher, Lewis McIntyre and Adam Cummins, with Matty Yates also missing out.

Dumbarton goalkeeper Sam Ramsbottom was the busier of the two shotstoppers in the first half but even then was rarely called into action.

He had to come off his line to punch clear Ayrton Sonkur’s flick on and was again out quickly to deny Darryl Duffy.

The experienced striker capitalised on a defensive lapse and found himself clean through with just the goalkeeper to beat.

He got his shot away but Ramsbottom did well to make the block with an outstretched boot.

Then, moments before half time, Duffy did have the beating of the goalkeeper.

Tom Orr brought the ball down well for his strike partner and it sat up nicely to be hit.

Duffy hit a looping shot towards goal, which had the visiting number one beaten, only for the shot to drop just wide.

Greg Fleming was finally called into action five minutes after the restart.

Rabin Omar cut in from the right and tried to beat the goalkeeper at his near post, only for Fleming to get down and tip the low shot round the post.

Finally, with 12 minutes left to play, Stranraer came within a matter of inches of making the breakthrough.

A fine team move saw the ball worked to the left, where Sean Burns delivered a teasing low cross.

Connor McManus threw himself at the ball in the six-yard box and Orr was lurking at the back post but neither could get that vital touch.

Dumbarton would carve out a series of half chances in the final 10 minutes as they threatened to take a lead back to the C&G Systems Stadium.

Ross Forbes also blasted a volley across goal and harmlessly wide, which means it is all to play for on Tuesday night.