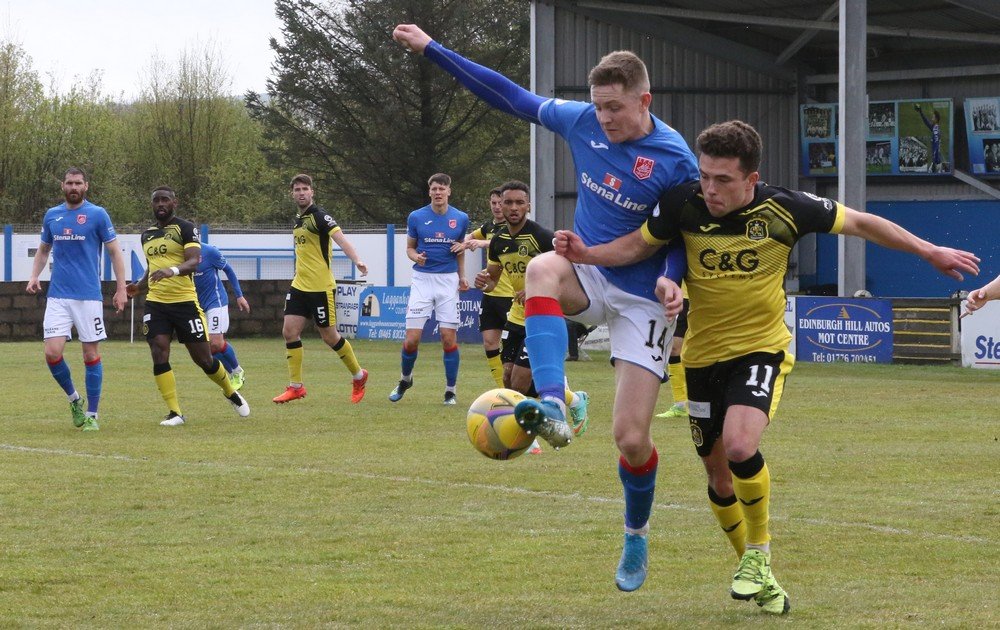 Stranraer will have to be at their best if they are to reach the play-off final, according to manager Stevie Farrell.

The Blues travel to the C&G Systems Stadium on Tuesday after a goalless stalemate with Dumbarton on Saturday.

The visitors will be boosted by the return of Grant Gallagher and Matty Yates to the squad, with only Adam Cummins missing out.

Speaking on Monday evening, Farrell said: “We will look at what we think is right for tomorrow night.

“On Saturday, both teams knew that they had another game, another 90 minutes and possibly more in front of them.

“Tomorrow night it is one game and one game left.

“Both teams need to try to go and win the game and that is the difference from Saturday.

“We will both be trying to do so and hopefully we can come out on top.

“It is going to be the last game for one of the teams and we are trying – as Dumbarton will be trying – to make sure it is not us.”

The two teams could not be separated at Stair Park, with Darryl Duffy, Connor McManus and Tom Orr coming close for the hosts and Rabin Omar, Robert Jones and Ross Forbes doing likewise for Jim Duffy’s men.

However, it was not a game of clear-cut chances, with both teams now looking to score and secure a place in the final against Edinburgh City or Elgin City.

Farrell said: “I’ve seen nerves, I’ve seen both teams not wanting to lose but I think it was both teams being tactically aware that it is a two-legged game.

“You knew that you could not go and win it in the first game and you needed to make sure that you did not go and do anything that was going to cause you a problem in the second tie.

“We played a certain style on Saturday that we thought was right for that game and on another day we might have been fortunate and scored a couple of goals.

“I think a draw was a fair result and we move on to tomorrow night.”

A goalless first leg means all is left to play for in Tuesday’s contest.

Darryl Duffy came close to breaking the deadlock in the first half but saw his effort blocked by the foot of Sam Ramsbottom. After the break, Connor McManus and Tom Orr came within a matter of inches from getting on the end of Sean Burns’ low cross.

At the other end, Rabin Omar and Conner Duthie called Greg Fleming into action but it was a contest with very little in the way of clear cut chances.

May 2019 was the last time Gavin Duncan took charge of a Stranraer contest.

That came at Stair Park, with a Leighton McIntosh hat-trick and Declan Glass goal giving Airdrie a comfortable win. Innes Cameron scored a second half consolation for the home team.

For an away contest, it is all the way back to January 2018 and a trip to Hampden Park. All four goals came in the final 14 minutes, with the spoils ultimately shared. Angus Beith scored for Stranraer before future Blue Luke Donnelly levelled things. Kyle Turner scored in stoppage time but the Spiders then netted from the penalty spot, with Adam Cummins – another future Blue – finding the net.

Mr Duncan took charge of the League Cup contest between Kilmarnock and Dumbarton in November. On that occasion, it was the Rugby Park side who emerged victorious. First half strikes from Eamonn Brophy and Mitch Pinnock were enough to wrap up the win.

Fans will need to cast their minds back to the summer of 2019 for the last time the referee was at the C&G Systems Stadium. Stranraer’s Dumfries and Galloway rivals Queen of the South were the visitors, with all five goals coming in the first 22 minutes. Former Blue PJ Crossan opened the scoring on eight minutes. However, strikes from Michael Paton, Gary Oliver, Stephen Dobbie and Connor Murray gave the visitors the win.

Our special playoff 1st leg edition of Beyond the Bandstand is available online, priced at £3 + P&P.

The issue features Blues winger Andy Stirling on the cover and is packed with our regular features.

You can also purchase Dumbarton’s programme for the second leg.

Tuesday night’s second leg will be broadcast by the home club on their Pixellot automated streaming service.

Craig calls for Blues to get season back on track