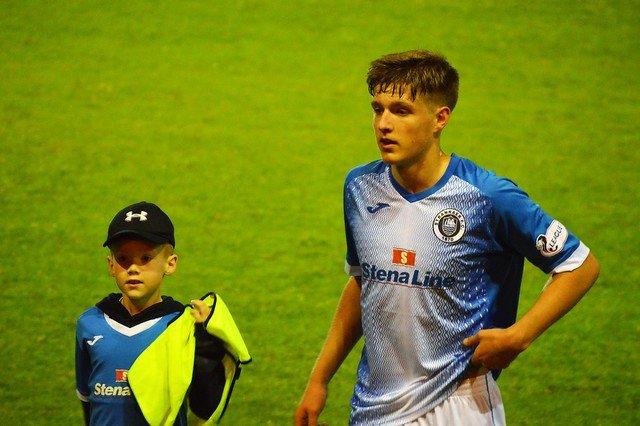 HARRY Mitchell thought he had made a dream debut after stepping off the bench and coming within inches of scoring.

The teenager replaced Ian Smith for the final 21 minutes on Tuesday evening against Rangers Under-21s.

The result was not what the home fans wanted it to be but it proved a memorable occasion for Mitchell.

The 17-year-old had only been on the park for a matter of minutes and almost capped it by scoring a memorable debut goal.

He said: “I knew I had not got a good connection on the ball but I thought I had scored!

The New Luce man received a text on Sunday afternoon from the club’s head of youth development Allan Jenkins asking if he was available for Tuesday evening.

Mitchell, who had not even trained with the first team before the Tunnock’s Caramel Wafer Cup clash, was happy to be called up and expected to enjoy the experience while sitting on the bench for 90 minutes.

He said: “It was a surprise.

“I was just wondering if any of the other boys had been picked, especially in that team I thought there would be boys ahead of me to be chosen.

“I’ve never trained with the first team before.

“I went to Stair Park and we were first there so when the boys came in the changing rooms they said it was nice to see the youth being involved and I was shaking their hands.

“It was quite nervous getting to know them.”

The youngster, along with Lewis McIntyre, Euan Brown, Robbie Adair and Reece Agnew, then warmed up with the first team before sitting down on the bench.

Mitchell, who had a number of his family members at Stair Park cheering him on, was warming up when he received the call to get stripped and get ready to go on.

He said: “There was about 25 minutes to go and when you get told you are getting 25 minutes for your debut it is quite nerve-wracking.

“It is such a big step from the reserves to the actual team.

“Chris Aitken spoke to me about my roles at corners.

“What he wanted me to do was when we had a corner was to stand by the keeper’s side and make sure he does not get out to the ball to catch it.

“Then, when we were defending he wanted me to stay up the pitch.”

Both of Stranraer’s substitutes who took to the pitch had a real family connection with the club.

Mitchell was the fourth member of his family to have pulled on the blue and white shirt.

Uncle Jim played a handful of games in the early 1980s while cousins Danny and Glen were key parts of the Stair Park squad for a number of years.

Meanwhile, Reece Agnew also made his debut, following in the footsteps of older brother Dean, who made 17 appearances for the first team.

Mitchell said: “There definitely cannot be too many families to have had four members play for Stranraer.

“Jim was round earlier and was saying well done for getting on.

“Danny came round as well and was asking if it was true that I got on.”

Twenty-four hours after representing the first team, Mitchell was again pulling on a Stranraer shirt as the reserves travelled to Dumfries YMCA.

The striker was on the scoresheet in the 3-1 win as the South of Scotland team kept up their unbeaten start to the campaign.

The Blues are looking to win back-to-back league titles and sit fourth in the table, behind Abbey Vale, Threave Rovers and Nithsdale Wanderers on goal difference.

Mitchell added: “We have lost a lot of players and it is quite hard to keep up that same standard.

Queen of the South preview