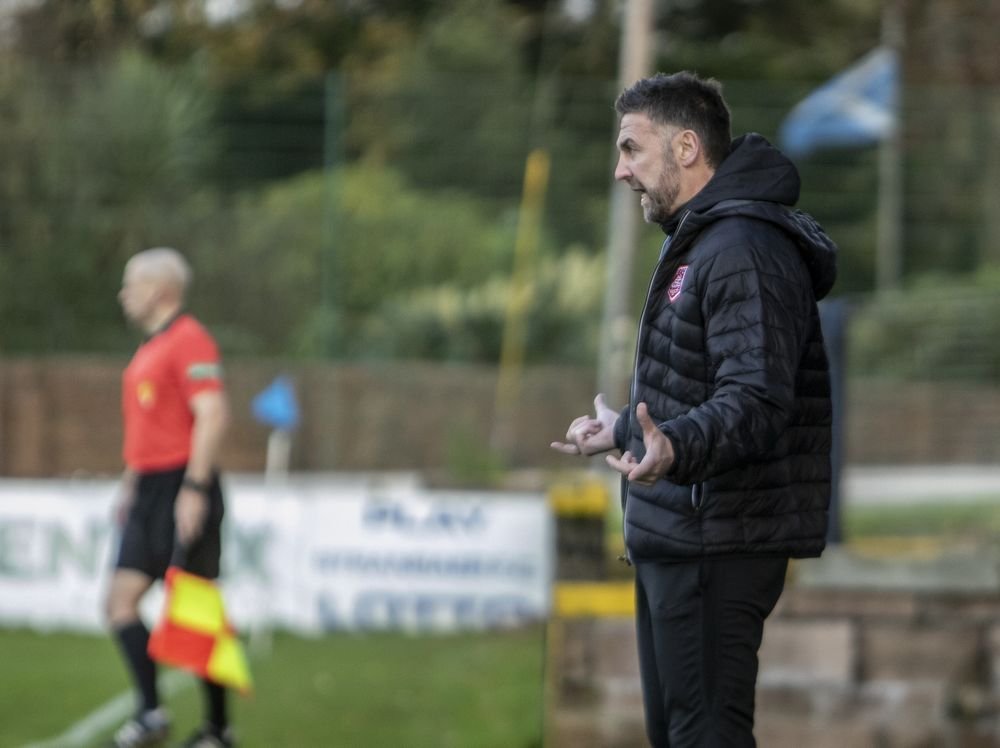 Stevie Farrell’s focus is firmly on Queen’s Park as Stranraer finally get their season underway again.

The Blues have not played since a thrilling 3-2 win over Kelty Hearts in the Scottish Cup back on January 9.

Since then, envious glances have been made towards the leagues above, with the Blues unable to build on their impressive recent form.

The manager said: “I know it is nine weeks later from the run that we have been on but we’ve been looking at the Queen’s Park game and that is all we have thought about.

“That’s what we have been preparing for in the last two weeks.

“We are going into that game trying to keep that run going.

“Although that run was nine weeks ago, it is still that run and we are determined to keep it going as long as we can.”

The manager has added Ally Taylor to his squad for the closing months of the campaign.

Signed on loan from Kilmarnock, he will go straight into tomorrow’s squad.

Farrell felt it was important to add both quality and quantity to his team and said: “Ally is a young player and he has got a fantastic attitude.

“He has fit in with the group like a glove and I mean that.

“The lad has been well received and he seems to be really enjoying it.”

Only Josh Walker will miss tomorrow’s contest as the midfielder recovers from ankle ligament damage.

The extended break has actually benefited the former Kilmarnock man though, with Farrell hoping he would be back within a matter of weeks.

Walker’s return will also be of use during the hectic close to the campaign.

Squad rotation might be more common in the top flight but Farrell stressed it would also be happening in the lower leagues.

He said: “Squad rotation is not a distinct possibility – it’s a fact.

“Players will think they are able play three games a week – Saturday, Tuesday and Saturday – and then go again but they can’t.

“They think they can and they actually believe they can but the harsh reality is that they can’t.

“If you did their stats, analysis and did it scientifically, then you would see a drop.

“You would see a drop between the first Saturday and the next.

“We are mindful of that and we will make sure that we use the full squad to keep things as fresh we possibly can.”

It was a very tight contest, with neither team creating much in the first half. However, Stranraer could have broken the deadlock when Tom Orr found himself clean through on goal. Goalkeeper Willie Muir was equal to the shot and would again deny Orr after the interval.

The only goal of the game would come three minutes from the end when Greg Fleming pushed Craig Slater’s shot away. Unfortunately for Stranraer, it landed at the feet of MacLean, who had time to cut inside and score.

Duncan Williams should be familiar to both sides as he was the man in the middle for the first meeting between the two teams this season.

Ross MacLean scored the late winner and the striker was also booked by the man in the middle. Also shown a yellow card back at the end of October was his team-mate Craig Slater and Stranraer’s Darryl Duffy and Thomas Orr.

He was also in Glasgow in February last year when the Spiders were 1-0 winners over Cowdenbeath, thanks to Slater’s early goal.

Saturday’s game against the Spiders will be streamed live by the home club, priced at £10.