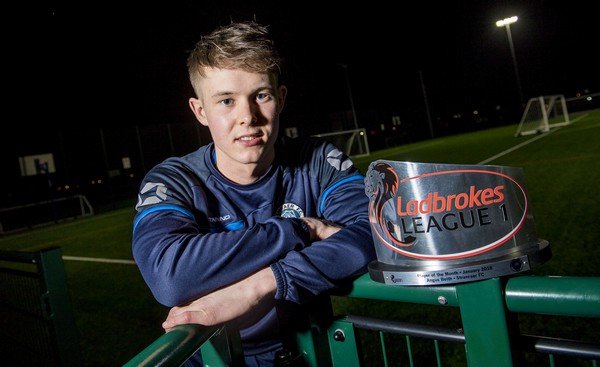 IT WAS not the way that Angus Beith wanted to end his loan spell.

Eight goals in his first 11 appearances in a Stranraer shirt had already established him as a real fans’ favourite.

However, a hip problem has seen him sidelined with the Hearts midfielder now starting his road to recovery.

He thanked the club, fans and team-mates for their support during his short spell at Stair Park.

Beith said: “Stranraer is a great wee club and I think, now that the financial problems have been levelled out a little bit, the manager can start concentrating on rebuilding for next year.

“They will be safe and I hope they have a great end to the season and the manager can rebuild and have a right good go.

“They have been great with me ever since I came to the club.

“They got the best out of me and the lads are a great group and I wish them all the best for the future.”

Beith might not be at that game but he has vowed to try to get to a Stranraer game before the end of the season.

The midfielder previously had loan spells at Stirling Albion and Stenhousemuir before joining Stranraer at the beginning of December.

His goals proved a massive boost for the Blues, particularly with the departures of Ryan Wallace, Steven Bell, Liam Dick, Danny Stoney, Tom Lang and Cameron Belford around the same time.

A debut goal at Gayfield was followed by vital strikes against Forfar, Queen’s Park, Airdrie, Raith Rovers and Albion Rovers – meaning that whenever Beith found the scoresheet, the Blues won.

He said: “I was hugely enjoying it at Stranraer and really looking forward to it week to week.

“I was playing every single week in a team with good players and enjoying my time there and scoring goals.

“The injury came as a disappointment and there were a lot of good things happening for me and the team at the time.

“I really enjoyed my first spell out on loan at Stirling.

“That was my first introduction to men’s football and it took me out of my comfort zone but this has been different in a way.

“I came here and felt I had to perform and had a bit more pressure on me.

“I think I had to step up and the players around me helped massively.

“I was in a team with some really good players and a manager that got the best out of me.”