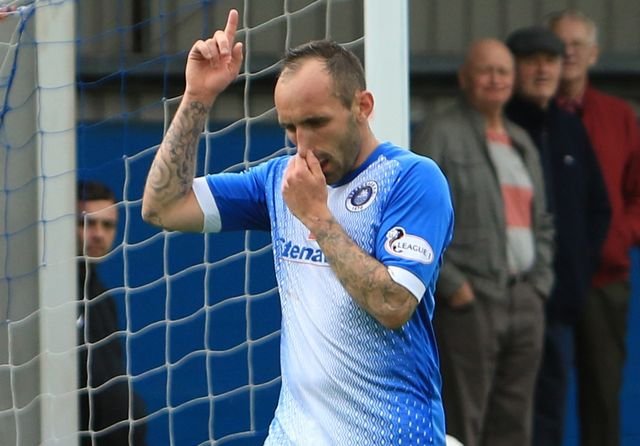 MARK Stewart is tipping Stranraer to get on the right track as his career takes him away from the club.

The striker confirmed earlier this week that he would be leaving Stair Park with his work in the rail industry making it impossible for him to continue playing football.

Stewart, who rejoined the club in the summer after a near 12-year spell away from Stranraer, will be working Wednesday to Saturday afternoon in Inverness.

He said it was a difficult decision to make but it was a move he could not turn down.

The 31-year-old said: “I started a new role within the company that I work for a couple of months ago, which involves a wee bit more travelling hence the reason I missed the Dunfermline game.

“What people probably never saw was that I missed a period of two weeks of training as well.

“It was starting to interfere a wee bit with football, which happens in part time football.

“The job is, obviously, my number one thing now.

“Then, I got offered the opportunity to keep doing what I am doing but be located out of Inverness for part of the week.

“That will run from a Wednesday to a Saturday and makes it impossible for me to make games.

“I’m not sure how long it is going to last but it is definitely going to interfere with football.

“It was getting difficult to manage the two of them and then having to relocate for the job just made it physically impossible at that point.

“The gaffer said he understood but did not want me to go and was gutted but obviously I’ve got a family to provide for and the job comes first.”

Stewart found the net four times in his 14 appearances this term to take his record to 10 goals in 22 showings in a Stranraer shirt.

His final appearance for Stranraer came against former club Falkirk on St Andrew’s Day, with the experienced striker an unused substitute away to Peterhead last weekend.

Stewart said he was going to miss the club and football in general but was confident Stranraer could get themselves out of their current predicament, which sees them five points adrift at the bottom of League One.

He said: “I played full time football up until I was 29 years old so it was 13 years.

“I made the decision to go part-time so I could build a career away from football and now it has obviously got to the point where I cannot do the two things, which, obviously, was the goal.

“It has maybe come six months too early but that is part and parcel, you just have to adapt and adjust.

“From a career point of view, it could not be going any better.

“It is just unfortunate, I was a wee bit disappointed I never got a final game in but the way the game at Peterhead was going I can maybe understand why the gaffer did not put me on and fully understand why I did not start; I had just told him I was leaving.

“I would have liked one final game and to try to get one final goal but it was just not to be.

“It happens and it was a disappointing game to go out on.

“Obviously, in football terms, we deserve to be where we are but we don’t as well.

“I think Stevie Farrell will get it out of them, hopefully they kick on, maybe make a few additions in January and kick on.”