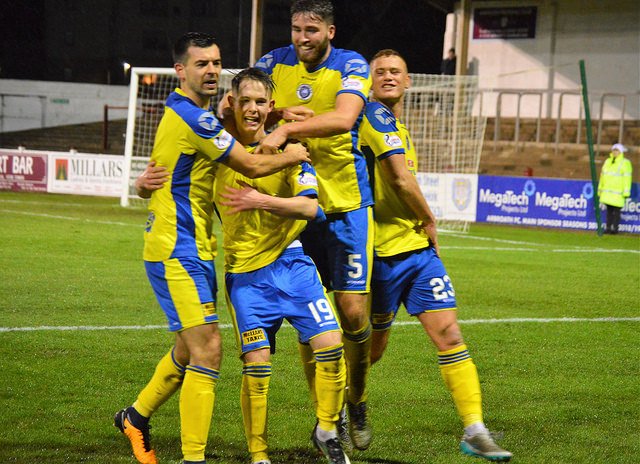 ONE game and one goal – it is no wonder Angus Beith describes his first appearance in a Stranraer shirt as “a dream debut”.

The midfielder joined on a 93 day loan from Hearts last Thursday evening and made an immediate impression during Saturday’s win over Arbroath.

Beith said: “It was a dream debut for me, I think.

“I’ve not played competitive football in a while and it was good to be back out there.

“It was a great result for us and good to get a goal.

“I caught the shot quite well but I thought somebody was going to get a toe on it or a defender would get it clear.

“I am just delighted with the goal and it came at a good time in the game.”

Saturday’s tie was the first time in exactly three months that Beith – nicknamed “Goose” – had laced up his boots for a competitive game.

He had featured in the IRN-BRU Cup for the Jambos’ under 20s team, alongside Dario Zanatta, whose is on loan at fellow League One side Raith Rovers, against Formartine United.

Then, he was part of the side that lost out to St Mirren in the next round.

The rest of his football has been restricted to under 20s action in the development league.

He said: “I think there is a pretty big gap between senior football and under 20s.

“I just think how competitive it is in senior football and there is more on the line.”

Now, on the back of one away win, the 21 year old is targeting another one.

His new side travel to Bayview Stadium aiming to make it back to back away victories for the first time since October last year.

And that could be a difficult task against an East Fife side who have won their last 4 home games.

“Putting a run together is massive and the manager was talking about that before the game at Arbroath.

“We have not had run and that is still to come for us.”