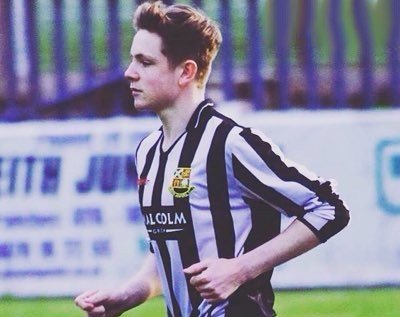 DEBUTANT Cameron Elliott is aiming to take inspiration from team-mate Kyle Turner as he looks to become a regular fixture in the Stranraer squad.

The teenager made his first senior football appearance during the 2-1 defeat at Dumbarton last Friday night.

Now, with that under his belt, he is aiming to add a few more appearances and follow in the footsteps of Turner (below), who could pull on the Stranraer shirt for the 71st time this weekend.

He said: “Kyle is less than two years older than me.

“Obviously, I want to be like that (in terms of Turner’s appearances) in a couple of years.

“It is good to look up to him and try to make that happen.”

18 year old Elliott is usually part of Stuart Wild and David MacGregor’s under 20s squad, but was an unused substitute against Forfar in Stranraer’s last league tie.

In fact, it was only late in the day that he found out he would be again among the possible substitutes for Stevie Farrell’s team on Friday.

Elliott said: “I didn’t expect to get on at all.

“I was not really meant to be in the squad but I got told to bring my stuff just in case.

“David MacGregor said to bring my shin guards and I didn’t know until 5pm and that probably helped.

“If I had known I was in the squad, I might have been worrying about it.”

Instead, it was not just the squad or the bench as an unused substitute for the game.

The former St Mirren youngster replaced Paul Woods for the final seven minutes as Stranraer attempted to rescue something from a 2-0 deficit.

Stephen Okoh managed to pull one back late on but the Blues could not find a leveller.

Elliott, who is an apprentice electrician, added: “Stevie Farrell just told me to go on and make something happen.”

Wild was full of praise for the midfielder, who he helped bring to the club at the end of last season.

He said: “After playing in the final two games of last season, his potential was never in doubt and after speaking to Stevie it was agreed to offer him a contract for this season.

“As he was signed by his local team, Beith, and was someone in their plans for the current season and would need to be released in order to sign, Beith would have been within their right to retain him.

“Johnny Millar, Beith’s manager, and President John Boal were both contacted and, to their credit, were very professional and understanding, agreeing that Cami had an opportunity and should be allowed to challenge himself to impress Stevie Farrell and feature at some point in the first team plans.

“All credit to Cami for making his debut in the latter stages against Dumbarton and he will look to follow in Kyle Turner’s footsteps and be another to be developed from the programme, which underlines the club’s policy on giving youth an opportunity.

“Finally, a massive thanks should go to John Millar and John Boal, of Beith Juniors, for recognising Cami’s potential and not standing in his way.

“Without this cooperation it would not have happened.”