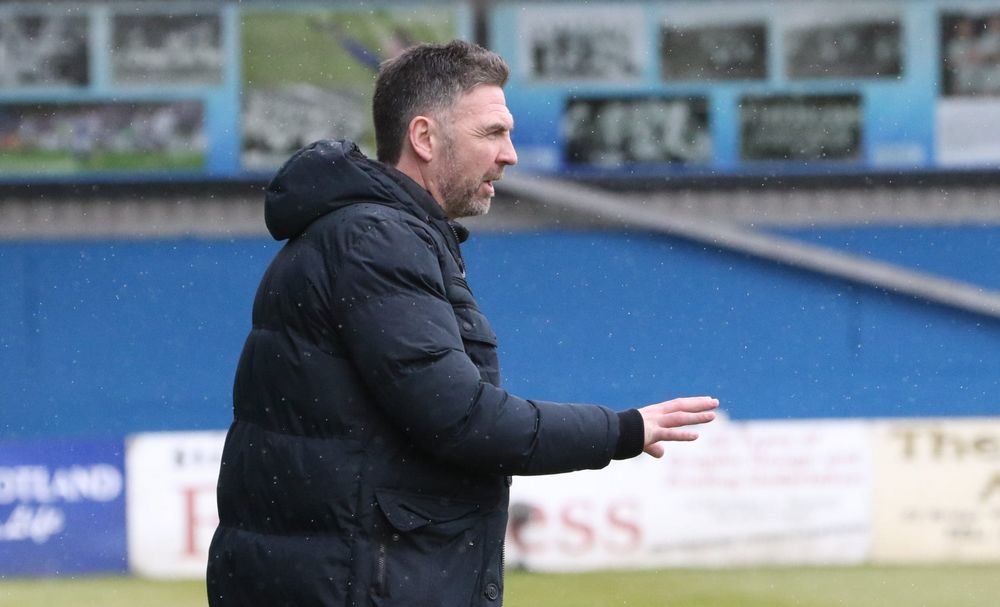 A defensive headache faces Stevie Farrell ahead of the final game of the second quarter of the season.

Stranraer travel to Cliftonhill for the first time since January 2018 and could be without three defenders.

Lewis McIntyre is already ruled out while Farrell is sweating on the fitness of both Sean Burns and Adam Cummins.

Burns limped off in Sunday’s Scottish Cup encounter with Hibs while Cummins was missing from the matchday squad.

The manager said: “The injury we are most concerned about just now is Adam Cummins and Sean Burns.

“It is causing me sleepless nights because I don’t have many naturally left-sided players.

“That was another reason why we shaped up like we did against Hibs.

“We knew that Sean was probably not 100 per cent but I’m just hoping one of them is fit for Tuesday.

“The rest of them all, thankfully, seem to be fit and healthy.”

Defeat in the last 16 stage means Stranraer can now concentrate fully on the league and the bid to reach the play-off places.

Brian Reid’s Albion Rovers side represent the final test before the league splits into two groups of five.

The Coatbridge side are unbeaten in their last five, including a 5-2 win over play-off chasing Elgin City less than 24 hours before Stranraer’s cup clash.

Farrell felt the result highlighted the toughness of League Two.

He said: “I’ve said it before and I’ll say it again, there are no easy games in this league.

“In League Two, you have got to fight for every point that you can get.

“Every team is capable of taking points off of each other.”

An impressive second half showing saw Stranraer sweep Albion Rovers aside back in December, as fans returned to Stair Park for the first time in months.

The scores had been blank at the interval but it took just two minutes of the second half for Stranraer to find a breakthrough. Ruari Paton’s corner was only half cleared and the ball was returned to the frontman, who cut inside and fired through a crowd of players.

Tom Orr’s solo run and strike from the edge of the box made it two and Darryl Duffy got on the end of Connor McManus’ cross to make it three.

Greg Fleming then denied Lewis Baker from the spot before Cameron Elliott wrapped up the scoring.

The Scottish Cup tie with Spartans was the last time Mr Wilson took charge of a Stranraer contest.

The Blues would run out comfortable 5-0 winners on that day, with Adam Cummins, Darryl Duffy and Ruari Paton finding the net, while Matty Yates bagged a double.

The last game away from Stair Park came at Stark’s Park in November 2019. A Jamie Gullan double and a strike from John Baird ensured Raith Rovers were picking up the points, although Mark Stewart managed to pull one back.

Twice Mr Wilson has been in the middle for Albion Rovers versus Stenhousemuir this season. The latest encounter, at Ochilview, finished 2-0 to the hosts, with Botti Biabi and former Stranraer and Albion Rovers man Mark McGuigan on target.

The first meeting, in October last year, also saw Stenhousemuir come out on top. Greig Spence, Creag Little and Biabi all found the net, with Kyle Doherty scoring for the home side.

Live coverage of Tuesday’s game is brought to you by the home club’s streaming service.

Albion Rovers use the Pixellot automated camera system and coverage is priced at £10.