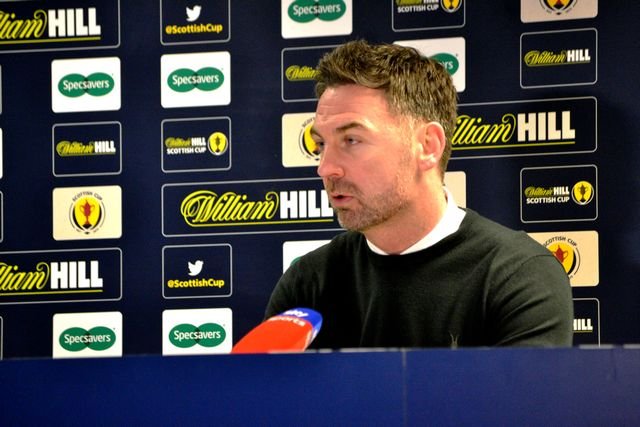 Underdogs occasionally overcome the odds was the message from Stevie Farrell as Stranraer get ready to welcome Hibs.

The Scottish Cup encounter will see the Blues trying to make a little piece of history as they aim to knock out their Premiership opposition.

Jack Ross’ men are heavy favourites for the contest but Farrell stressed nothing was written in stone.

He said: “As the league sits, outside the Old Firm, they are the best team in Scotland.

“That is how tough it is going to be for us.

“We are underdogs and rightly so because Hibs are a fantastic team.

“We’ve just got to believe that it might be Stranraer.

“We have got to have that desire and that belief in ourselves, the squad and each other.

“If we go and play at our very best and make it as difficult as we can for Hibs then you just never know.”

Lewis McIntyre is the only certainty to miss the clash with the Edinburgh opposition as he continues to struggle with a back injury.

Positively, club captain Grant Gallagher has bounced back from a hamstring problem and could be involved either on Sunday or on Tuesday against Albion Rovers.

Stranraer come into the Scottish Cup clash on the back of an impressive 4-0 demolition of Stenhousemuir.

It was a result which secured Stranraer’s place in the top five with a game to spare.

Goals from Tom Orr and Ruari Paton on Thursday night took both frontmen into double figures for the campaign.

Farrell was pleased with the impact both men had made after stepping up from the Lowland League in the summer.

He said: “I’m delighted with them both.

“If you had told me on the nights I was trying to sign them that they would both get into double figures then I would have bitten your hand off.”

Farrell took in the Elgin City and Albion Rovers match earlier this afternoon, with Stranraer facing the Coatbridge men on Tuesday evening.

Speaking on Friday night, the manager said: “I’m going to actually buy the stream and settle down and watch that.

“Ideally, I would like to see it in person but I don’t fancy making another trip to Elgin!”

Brian Reid’s Stranraer made the journey to Easter Road more than five years ago in the second round of the Scottish League Cup.

The hosts had their fair share of chances in the first half but Craig Malcolm came close to giving Stranraer a shock lead, only for Mark Oxley to pull off an impressive save.

The only goal of the game would come in the second half when Scott Rumsby turned Fraser Fyvie’s cross beyond Conor Brennan. Andy Stirling came close to a late equaliser but his shot was just over the crossbar.

Dale Hilson’s penalty was all that separated Stranraer and Forfar Athletic the last time David Munro took charge of a Stranraer match.

The Blues made the journey to Station Park in August 2019 with just a squad of 15 and the hosts scored from the spot in the final quarter hour.

The last occasion at Stair Park was more than two years ago when Stranraer welcomed Raith Rovers. Kyle Turner and Joao Victoria had put Stranraer two goals up at the interval but the visitors would come back to take a point. Craig McGuffie scored three minutes after the restart before Kevin Nisbet netted from the penalty spot.

It is the referee’s fourth contest involving the Easter Road side this season. The most recent was at Easter Road where Livingston ran out 3-0 winners. Josh Mullin and Jon Guthrie were on target before the break and Scott Robinson wrapped up the win just two minutes after the restart.

Hibs were the winners in the League Cup contest against Alloa at the Indodrill Stadium. Paul Hanlon’s own goal in the first half put the Wasps in front but Christian Doidge levelled things. Nicky Jamieson’s own goal in the closing stages gave Hibs the victory. The remaining contest was also away from home when David Gray scored late on against Forfar Athletic.

Our special bumper matchday programme for this weekend’s cup tie against Hibernian is available to order on eBay now.

Packed full of features, Beyond the Bandstand features Blues favourite James Hilton on the cover and is priced at £3 + P&P.

As heartbreaking as it is for fans to miss out on such a significant cup tie, we must respectfully ask everyone to put the safety of themselves and others first.

Although Covid-19 restrictions around the country are easing, unnecessary travel and large gatherings are still not permitted.

Please tune in on BBC One Scotland from 12noon, give us your backing on social media and cheer us on from home.

We are immensely grateful for your patience and ongoing support.