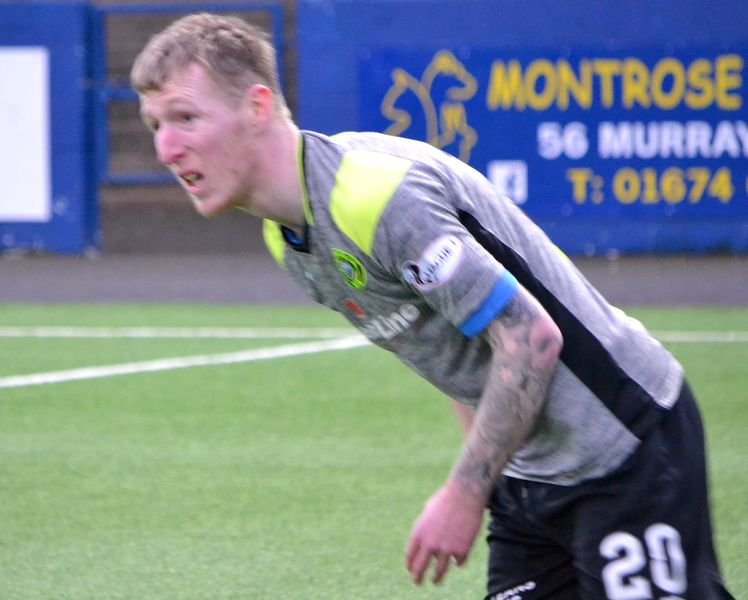 IT WAS not the result Stranraer wanted at Links Park on Saturday, but it was especially memorable for one man.

Dean Fyfe replaced Andy Stirling for the final 10 minutes and fulfilled a childhood dream in representing his hometown club.

The substitute said: “It means a lot to represent my hometown team.

“I have always watched them since I was a boy and always wished that I would maybe get a shot one day.

The 25-year-old has been a standout for the South of Scotland team, who sit second in the league.

Threave Rovers are top of the pile at the moment and boast a 10 point advantage over the reigning champions.

However, Stranraer also have four games in hand and are buoyed by Saturday’s 7-0 demolition of Mid Annandale.

Fyfe could have been lining up in the South team at Stranraer Academy, but instead opted to make the near 400-mile round-trip in the hope of representing the first team for the first time.

He said: “I got text last night from Gary McCutcheon just asking me if I could go and help out on the bench.

“I had no hesitations – I have always wanted a chance with the first team.

“I thought I might as well go up and give it a shot.”

Montrose had taken the lead through Paul Watson before an own goal brought Stranraer level during the second half.

However, the home side, who are unbeaten at home in 2020, would prove too strong in the closing stages, with two stoppage time goals helping wrap up a 4-1 win.

Fyfe, who works for Lidl, told the club website he had enjoyed the experience and thanked the players and management for helping him feel at ease.

He said: “The management just told me to go on and do what I want.

“That just gave me a lot of confidence to go on and try to do things.”

The midfielder was keen to follow in the footsteps of South of Scotland standout Lewis McIntyre and pick up a few more appearances.

However, if that does not happen, he was hoping to help the reserve team to become the first back-to-back winners of the league since Wigtown and Bladnoch managed it in 2015.

Fyfe said: “The South team has been doing very well.

“Gary McCutcheon, Allan Jenkins and Sanny Sutherland are all very good with us.

“We won the league undefeated last season and I don’t think that has been done before.

“It was really good to do it and this year there has only been one defeat.

“Hopefully, we can go out and finish the season unbeaten.

“It would be good to win the league again and we are capable of doing it as well.”