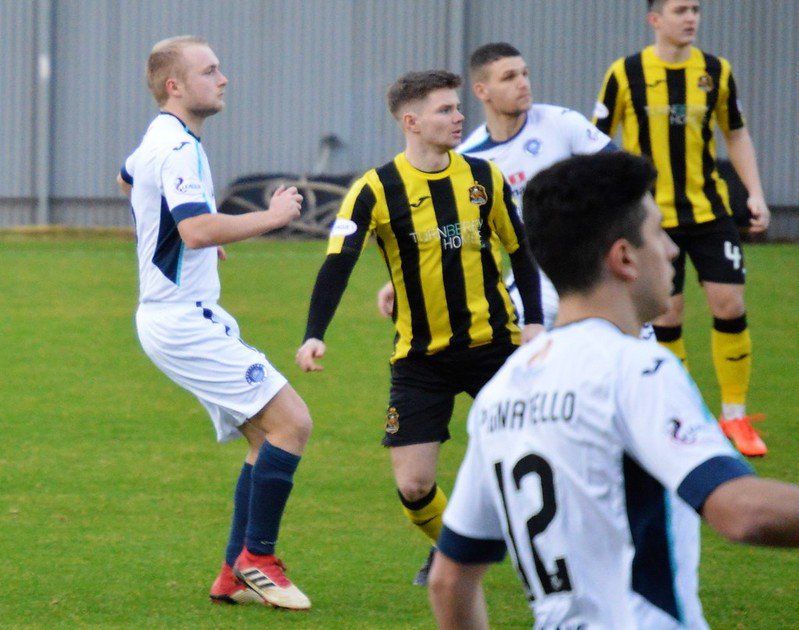 MAKING your senior debut for your hometown club is likely the dream of many a young footballer.

Lewis McIntyre did that against Dumbarton on Saturday but he is determined not to simply be a one-hit wonder.

A composed 90 minutes saw him help Stranraer to a valuable point in their bid to beat the drop.

McIntyre said: “It is a massive achievement for me.

“I have played in the south level right the way through from little to now, obviously, reaching the first team.

“I have always strived when I have played to get that level and now that I have done it it feels great.

“But I don’t feel like I want it to stop either; I definitely want to get more minutes under my belt.

“It sort of gives you that feeling of knowing that you want more.

“Now that you have done it, you don’t want it to stop.”

The 23-year-old has been a regular in the club’s reserve side, who sit fourth in the South of Scotland Football League – 11 points adrift league leaders Threave Rovers but with four games in hand.

The defender, who previously had spells with Kilwinning Rangers and Wigtown and Bladnoch, did enough to impress the management team and received a call later that night to tell him he would be starting against Dumbarton.

McIntyre, whose mum and dad, Margaret and Andy, both help out at the club admitted it was a “nerve-wracking” few hours before preparing himself for his debut.

His parents were joined by his partner’s family at the game, which saw the Blues take a point after James Hilton’s late header.

McIntyre joined Carlo Pignatiello in a makeshift back four alongside Adam Cummins and Jordan Allan and praised his experienced defensive colleagues for helping him through the game.

He said: “The experience from Adam and Jordan was very much of benefit.

“They were very helpful on the pitch, even before the match and then after the match.

“It was probably down to them how I played.

“They certainly helped talk me through the game and being my first time at that level it made all the difference.”

Now, attention turns to a trip to Clyde this weekend, with the Blues hopeful of welcoming back Hamill, Robertson and Ryan Thomson.

The return of the experienced trio boosts Farrell’s squad but McIntyre will once again be involved.

He spoke to the club website as he travelled to training on Monday evening and was looking forward to testing himself once again.

The former Sandhead Primary School and Stranraer Academy pupil said: “I am heading up training just now and then Thursday afternoon they are wanting me back up.

“I believe they are wanting me involved on Saturday as well.

“I will be back in the fold for Saturday.”