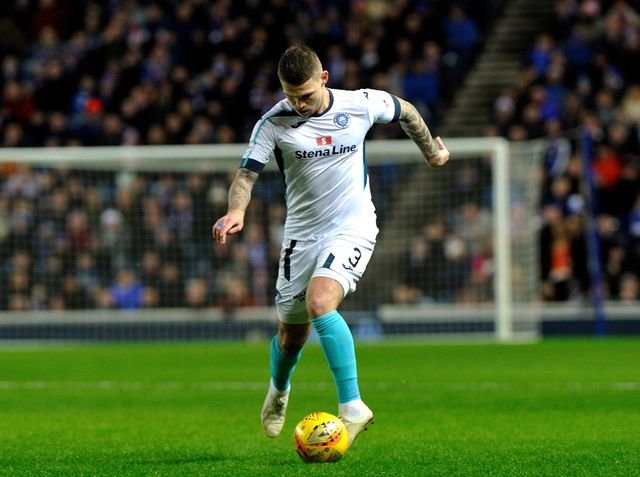 WITH the Scottish Cup clash with Rangers out of the way, Jordan Allan is confident Stranraer can start picking up the points needed to move up the League One table.

The Blues lost 2-0 in Glasgow thanks to a Scott Arfield strike and a Jermain Defoe penalty.

Despite the defeat, Allan feels the result could galvanise his team and help them to close the gap on the teams above.

He said: “I think this can be the starting block for us to kick on.

“The gaffer thinks so and everybody just believes.

“Tonight was probably just the first night that everything was drilled in and we knew exactly what we had to do and who we were doing it with.

“It is a great building block to start on and I fully believe we can start moving up the league.

“Everybody in the changing room believes we can do it and we just need to start picking up points.

“Ryan Stevenson coming in is obviously a massive help with having him up the park.

“There are boys who have been in this position before.

“I am pretty experienced and I’m 24 and I’ve not got anything on those boys.

“It is a good group of boys and I definitely think we are going to pull ourselves out of it.”

Stranraer head to Airdrie on Saturday looking to make it three games unbeaten in the league.

Draws at Dumbarton and Clyde have clearly helped but Stevie Farrell’s men need three points on the road.

That is something they have not managed all season and the travelling Stranraer fans need to look back to April and a memorable 3-2 win over Raith Rovers for the last away victory.

Allan, who has featured in 24 of the club’s 27 matches this terms, pulled no punches.

There were no ifs, buts or maybes – Stranraer had to find the winning formula both home and away.

He said: “It has to be our first away win.

“We were so close last time we went there but we just let it slip.

“I think we have learnt from that and I don’t think it will happen again.”

Stranraer received plenty of press coverage in the lead up to the trip to Ibrox on Friday evening.

The full-back even suggested it was like a certain member of the Stair Park squad had his own reality show.

He laughed: “The media has been absolutely mental.

“They were coming into training and I think the gaffer was having a bit of a panic on the Thursday night.

“We were meant to be training at 7.30pm and the press were wanting pictures and interviews with boys at 7.15pm.

“We were trying to get ready to face Rangers the next day!

“It was not a circus in a bad way but it was always there, always something going on, people phoning you through the week and boys getting phoned at work.

“Honestly, there were cameras constantly with Jamie Hamill – you would think he was a Kardashian coming in here.

“They were just walking about with him constantly.

“It was good and don’t get me wrong some boys have never had that before.

“It was a new experience for them and it should drive everyone on in the league knowing that we can go to Rangers and concede from only a set piece and a penalty.”

Now, with the cup clash out of the way, Allan said the team was very much focused on the remainder of the league season.

Stranraer have 16 games left to find their way out of the automatic relegation place, with Forfar, who sit one spot above them, seven points better off, although they have played one game more.

Speaking in the away dressing room, minutes after the final whistle at Ibrox, Allan said: “We have to concentrate on the league now, 100 per cent.

“We just need to go and perform the same way and take all this into the league.

“We need to go and perform in the league.

“The gaffer will have us ready for Airdrie and the boys all know that we need a massive push now until the end of the season.

“We cannot let up, we cannot drop points, we need to start taking three points.

“The performance tonight, from our point of view, it was a really, really good performance.

“Better teams than us have come here and been absolutely slaughtered.

“Although the result does not favour us, it was a good experience.”