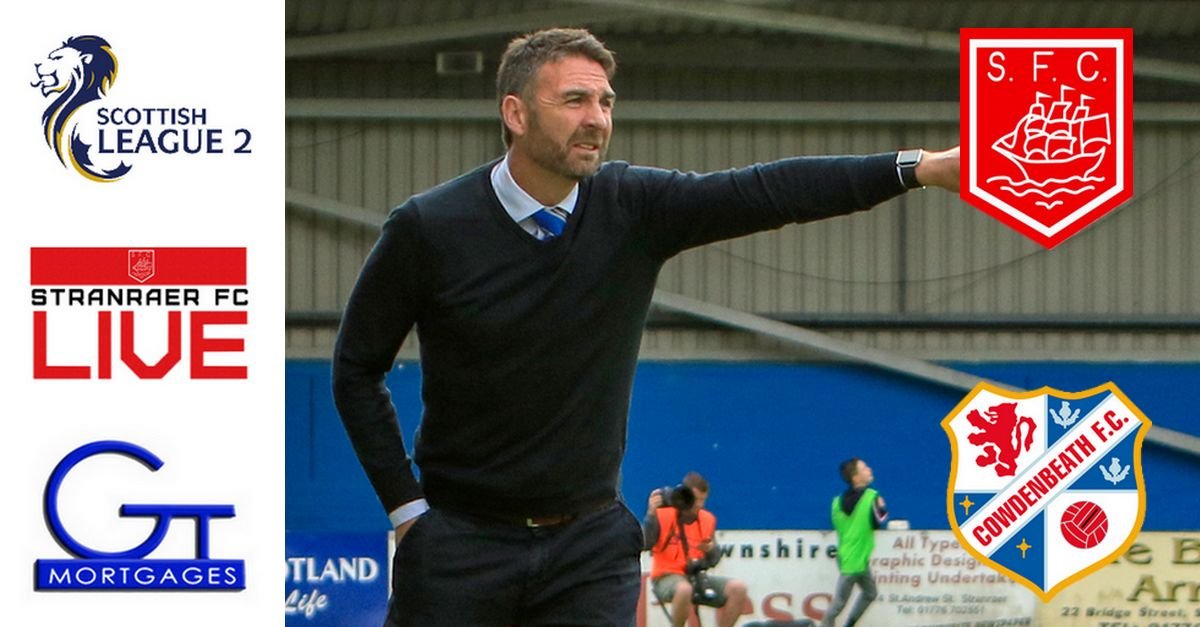 There is more to come from Stranraer as they look to get back up to speed, says manager Stevie Farrell.

The Blues picked up a 2-0 win over Brechin City on Tuesday night, with goals from Andy Stirling and Tom Orr.

A trip to Cowdenbeath tomorrow (Saturday) gives Farrell’s side the chance to build on that result.

The manager said: “Although we had a good performance and good result against Brechin, I don’t think we are at the level we were prior to lockdown.

“I think it is going to take every team some weeks to get to that.

“That is just a given that that is going to be the case.

“You cannot come back from nine weeks off and suddenly just go and play and that is Stranraer or any team.

“But after last Saturday, we saw a progression on Tuesday.

“It was a good positive result and a more positive performance.”

Josh Walker and Lewis McIntyre will miss the trip to Central Park tomorrow, while Andy Stirling is also struggling with a hip injury.

The midweek goalscorer did some light training last night (Thursday) but it remains to be seen if the game comes too soon.

Positively, the Blues will welcome back Kieran Millar, who missed the contest with Brechin through suspension, and defender Scott Robertson, who came off at half time on Tuesday night.

Robertson’s withdrawal opened the door for Tom Devitt, who has been out of the team since Halloween thanks to the good form of Robertson and Ayrton Sonkur.

“Tom is someone that I trust completely.

“It is just that Scott and Ayrton have done so well this season as a partnership.

“That’s something only myself and the players will know ahead of the game tomorrow.”

Stranraer’s first league win of the season came against Cowdenbeath back in November.

However, it is a different looking Fife side now, with three players – Zander Miller, Kyle Hutton and Ryan Adamson – all signing within the last 24 hours.

Farrell, who has added only Ally Taylor to his squad, said: “It is probably the biggest January transfer window there has ever been in history!

“It started on January 1 and it is still going.”

A first three league points of the season came for Stranraer at the beginning of November when Cowdenbeath visited Stair Park.

Thomas Orr broke the deadlock on 36 minutes with his first goal for the club when he managed to find enough space to get his shot away. Greg Fleming pulled off an important save from Harvey Swan in the second half and Cowdenbeath’s day got worse when Robbie Buchanan was sent off 13 minutes from time. Joao Victoria then wrapped up the win three minutes later with a fine finish.

Blues fans will not need to cast their minds back too far for the last Stranraer contest involving Duncan Williams.

He was the man in the middle for the first game after the restart when the Blues travelled to Hampden Park. Queen’s Park were 3-0 winners on that day, with goals from Michael Doyle, Lee Kilday and Robert McHugh, with Kieran Millar sent off for the visitors.

Mr Williams was also in the middle for Queen’s Park’s visit to Stair Park on Halloween, when the Glasgow side won thanks to Ross MacLean’s late strike.

Completing a trio of Queen’s Park contests, the referee last took charge of a Cowdenbeath match when the Fife side visited the national Stadium in February last year. Craig Slater scored the only goal of the game to give the home side all three points.

We hope to bring you interviews on Saturday, with highlights to follow on Sunday.