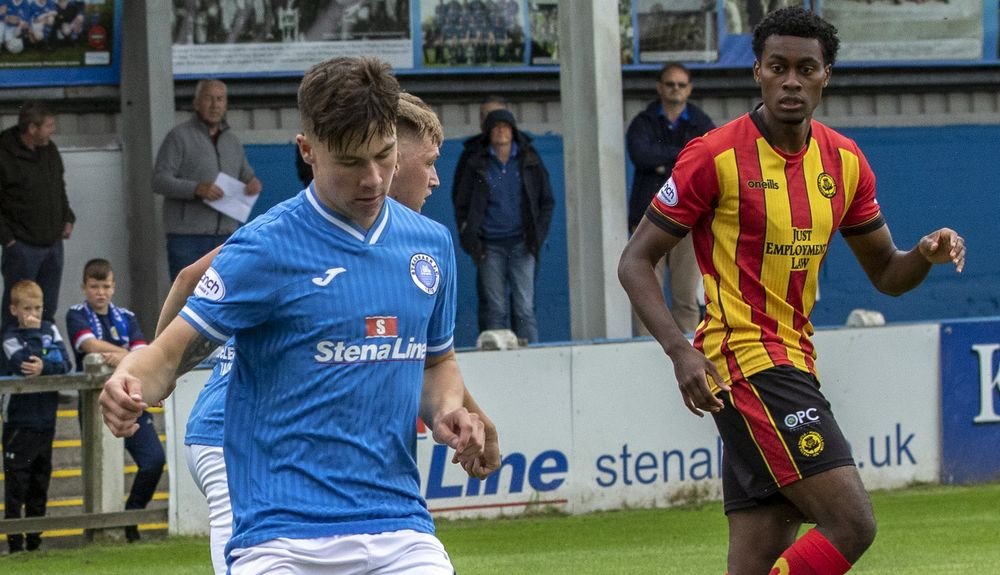 Ross Irving has vowed to give it his all whenever he is called upon after coming off the bench in the last two games.

Stranraer followed up a 1-0 win over Elgin City with a 4-1 thumping of Stenhousemuir on Saturday.

Irving has featured on both occasions – having previously not played a minute since the beginning of October.

The 20-year-old was keen to play more but stressed: “The boys are putting in good performances and there are good players in my position.

“I will keep working hard in training and get a chance.

“I had a wee run of games before and fell out of the picture for a bit – it happens.

“It is a long season but even the last couple of weeks, where I have not played a lot of minutes, it has been nice to get on the pitch.

“It is good to get on the pitch with the boys and win both games.

“The most important thing is that we are winning.

“I would love to be playing but it is a team game and everybody is going to play at some point.”

The frontman was one of a number of summer signings as Jamie Hamill looked to rebuild the squad in the wake of Stevie Farrell’s departure.

Irving, who was previously on the books at Livingston and Queen of the South, revealed recommendations from a former Stranraer fans’ favourite and a man with experience in the English Premier League put him on the Stair Park radar.

He said: “Scott Robertson brought me in and had spoken to a couple of people.

“One of those was Willie Gibson, who coached me at Queens, although we never got a chance to play together, and Stephen Dobbie was another.

“They gave me a good recommendation and Scott phoned me and asked if I would like to come in.

“Stranraer is a good club and I thought it was a good opportunity to play professional football and get some game time.”

Irving made his debut for the Palmerston Park side against Motherwell in July 2019.

However, despite his connection to the eastern end of Dumfries and Galloway, he is no stranger to Wigtownshire.

He said: “My Papa is from Kirkcowan and my mum’s granny is from Newton Stewart.

“Most of my Saturdays I would get the bus to Newton Stewart to visit family.”

Irving was only on the pitch for a matter of minutes at Ochilview Park but came within a whisker of making the 4-1 triumph a five-star performance.

A teasing ball from fellow late substitute Josh Walker was met by Irving but with the ball seemingly heading towards the net the spin took it away from goal.

Speaking the following day, Irving said: “I was heartbroken when it spun to the side!

“We left the stadium and I said to Tommy Muir ‘why could it not have gone in?’

“The ball was just about to go in the net and then it spun back – it was pretty much on the goal line.”

Two goals in the final 10 minutes gave Stranraer all three points at Central Park back in August.

The Blues again had trialist Jack Baker in goals for the contest, which was manager Jamie Hamill’s first three points on the road. The scores were blank at the interval but it did not take long for Liam Buchanan to score from close range to give the hosts the lead.

Seven minutes were left when Stranraer found their leveller through Josh Rennie who fired home Joe Moore’s low cross. As the game entered stoppage time, the Blues secured all three points as Grant Gallagher blasted home from the corner of the box.