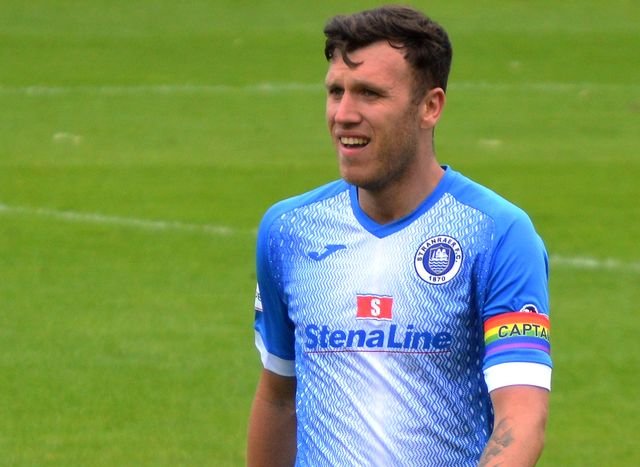 INJURIES have been a theme central to Stranraer this season.

Only Connor McManus has played in each of the 30 games while players have missed matches through injuries or suspension.

On Saturday, Adam Cummins played through the pain barrier to help Stranraer make it five draws in a row.

However, it was not an injury suffered in a match or training that threatened to see Cummins left on the sidelines.

Speaking on Saturday, he said: “I had a car accident on Monday and I have not trained all week.

“A few headers went up in the first five minutes and I probably needed that just to make sure I was alright.

“Sometimes, things like that obviously happen but it all gets forgotten about at 3pm on a Saturday.

“My neck, shoulder and back – all of that – were hurt from the impact.

“I just did the right things and went to see a few people that I needed to see and got a bit of work done.

“Thankfully, I was fit to play.

“The car is in the garage but cars can be fixed and it was lucky that I was in the car on my own, which is a good thing as well.

“Sometimes these things happen and they are out of your control.

“You feel it a little bit on a Saturday when you have not trained, I really have not done much at all this week, mentally you have got to make sure you are switched on and ease yourself into the game.

“Last 10 minutes, the way we were playing you get that little bit of an extra second or third wind.

“When the whistle goes at 3pm, you, most of the time, forget about anything that is going on and you are just concentrating on the game.

“I am here and talking to you, which is good.”

John Baird had opened the scoring for the Kirkcaldy side but Cummins, along with Scott Robertson at the heart of the defence, held firm against everything else they had to throw at them.

Cummins was pleased with his side’s recent performances, which has seen them draw five league games in a row.

Those five draws include not just Raith Rovers but Falkirk and Airdrie, who are also battling it out at the top of the table.

The defender said: “Even outside of the league, we had a decent defensive performance at Ibrox as well.

“It is five draws and in some of the games we probably would not have got the draws and maybe lost the games earlier on in the season.

“We are building momentum but we are not naive; we know we need wins.

“This coming Saturday is massive.

“Obviously, Forfar’s game against Peterhead was abandoned and we are even stevens going into next week and we don’t have the game in hand now.

“There is still enough games and a lot of football to play but we do need to start winning games to start getting ourselves out of the situation.

“The performances are definitely there.”

This Saturday sees the Blues again on their travels as they head to Forfar in a bottom of the table clash.

Tenth placed Stranraer will be looking to close the gap on their hosts, who sit ninth and have won both meetings between the two sides this season.

Cummins stressed nothing would be decided the day on Saturday but it could play a big part in the closing stages of the campaign.

He said: “It is not a case of if you lose next week then you are relegated but momentum is massive.

“The last five weeks, we have built a good bit of momentum up and probably could have had a few more points.

“We are building momentum, we are playing well as a team and we have got competition, healthy competition, for places.

“There are still a couple of people who have not been available through the loan deals and stuff.

“Next week, we’ve had a couple of lads injured but outside of Grant Gallagher – and he is coming along well anyway – we will, hopefully, have a full strength squad to pick from.