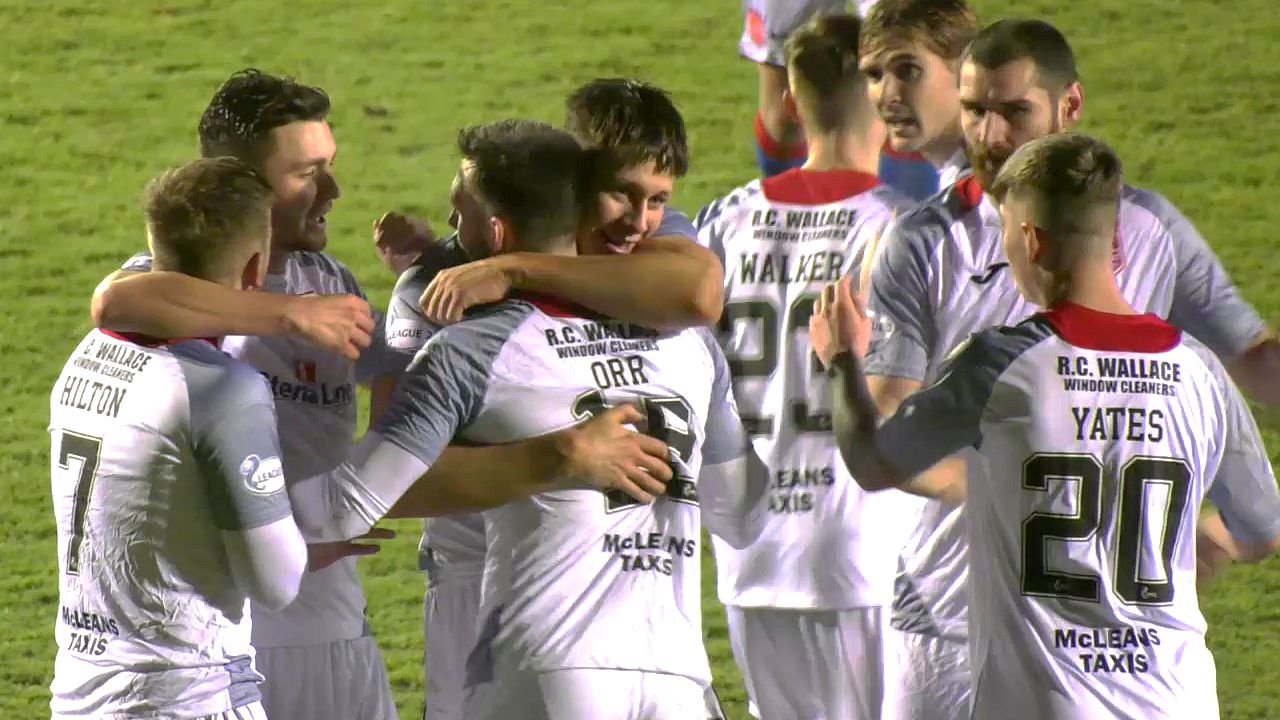 Stranraer climbed into the playoff places with a resounding win over Brechin City at Glebe Park.

Ruari Paton’s early goal had the Blues in front, only for Luc Bollan to head home the equaliser just before the break.

But the second half saw Stranraer score three without reply, as Thomas Orr, Darryl Duffy and James Hilton all found the net.

Stevie Farrell kept faith with the side which defeated Edinburgh City by a single goal one week earlier.

And much like the game at Ainslie Park, the Blues scored took the lead early on.

Good pressing work from Orr earned a Stranraer throw in, with Scott Robertson lifting a dangerous ball into the box for Paton.

The young Irishman showed strength to shrug off his marker, chesting the ball down and slotting past Brechin keeper Lewis McMinn.

Stranraer had claims for a penalty as Orr was challenged by Bollan, but referee Steven Reid waved play on.

And Duffy came close with a curling effort which sailed just wide of the post.

But as the first half progressed, Brechin looked the side most likely to score.

Connor Coupe raced forward down the Blues’ right hand side, and found space to bring a save from Greg Fleming with a dipping effort.

Brechin’s goal threat would be short lived, however.

At the other end of Glebe Park, Joao Victoria danced his way through a few challenges, with a defensive intervention only delivering the ball to the feet of Orr.

Unfortunately the striker could only lift the shot over the bar, but there was better yet to come from Orr and the Stranraer attack.

Ten minutes into the second half, Paton’s deep delivery from the corner found Adam Cummins at the back post.

Orr charged towards the opposite post and nodded the ball down into the bottom corner.

The striker’s first touch flicked the ball past Gregor Jordan, with his second sandwiched between two sprints against the Brechin defender down the wing.

By the time of his third, Orr was at the byline, squaring for Duffy to tuck the ball into the corner of the net for his fourth goal in as many games.

With the Blues now comfortably in front and outplaying their opponents, Farrell introduced Hilton, Matty Yates and Josh Walker from the bench.

Stranraer had penalty appeals turned down once more despite a shirt pull on Yates, but it would be fellow substitute Hilton who closed the show.

Determined pressing from Orr and Yates won possession on the 8 yard line, with Orr chipping back for Hilton to unleash a left-footed half volley into the back of the net.

The victory saw Stranraer go five games undefeated and rise to 4th in the League Two table, with Stirling Albion next to play.