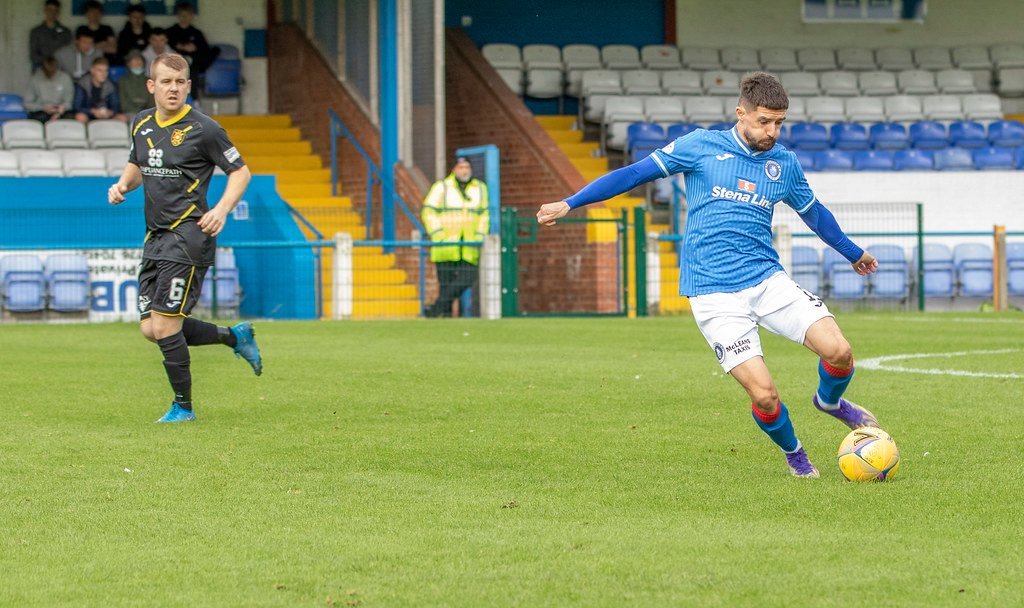 Goalscorer Paul Woods is hoping to begin 2022 in the best possible way – with three points.

Stranraer have lost back-to-back league games for the first time since August with defeats to Kelty Hearts and Albion Rovers.

The New Year kicks off with a Dumfries and Galloway derby as Annan Athletic venture along the A75.

Woods was keen to ensure the home side got back on the right track at Stair Park.

He said: “You just want to get a win under your belt right away after those two games.

“It is a good chance being at home but we do not want to make it three straight defeats in a row and it festers away.

“We will be going to win the game and stop that wee run.

Stranraer are yet to beat Annan this season but took a point in the last meeting at Galabank in November.

Woods was on target on that occasion and also found the net against Albion Rovers on Boxing Day to take his tally for the season to three.

The midfielder, who rejoined the club last summer after time with East Kilbride, described the loss at Cliftonhill – where Stranraer had led 2-1 – as “very disappointing”.

The Blues were in front at the break but saw the advantage disappear before Sam Ellis was sent off and the hosts claimed a late winner.

He said: “Obviously, coming back from a goal down, we were playing well in the first half.

“We did not come out in the second half – it was like two different teams.

“Then, you think, can you hang on and get a point after the sending off.

“To lose that in the last minute was a sore one to take.

“We should have been further in front in the first place.”

Stranraer were given the perfect opportunity to get their noses in front in Coatbridge when they were awarded a penalty with just three minutes on the clock.

“The keeper has guessed the right way and it seems to be not happening for us.”

Stranraer twice led at Galabank in November before the spoils were shared.

Matty Yates crossed in for Ross Smith to score his first for the club for the opening goal. However, the lead would not last until the half time interval. Aidan Smith blocked Scott Robertson’s attempted clearance before racing through on goal and firing high beyond Luke Scullion.

There would be one more talking point in the opening 45 minutes and it saw Sean Burns sent off after tangling with Tony Wallace.

Yates had the ball in the net in the second half but it was ruled out for offside before Paul Woods nodded home with just a few minutes remaining. Unfortunately, Stranraer would concede almost immediately as Owen Moxon ensured the game finished 2-2.

1. If Jack Baker starts on Sunday, Stranraer will have used a different goalkeeper in each of the three meetings with Annan this season. Curtis Lyle was in goals for the previous meeting at Stair Park while Luke Scullion was between the sticks at Galabank.

2. The two sides have met on 19 occasions since Annan Athletic joined the Scottish Professional Football League. There has never been a 0-0 draw.

3. From those 19 meetings, five players have found the net on a total of four occasions. Current Annan man Owen Moxon and former Blue Ian Harty managed it for the Galabankies while Sean Winter, Stuart McColm and Michael Moore did it for Stranraer.

4. It was exactly 12 months ago to the day that Stranraer and Annan Athletic met at Stair Park. On that occasion, Thomas Orr scored before Owen Moxon was sent off and Ruari Paton netted from the penalty spot.

5. Tony Wallace scored a second half hat-trick for Annan Athletic against Kelty Hearts last week, and the midfielder was also with Stranraer briefly in 2017. He came on for Grant Anderson in a 2-2 draw against Queen’s Park. Ryan Wallace and Anderson had scored for Stranraer that day before a certain Anton Brady pulled one back and a Morgyn Neill own goal meant the points were shared.