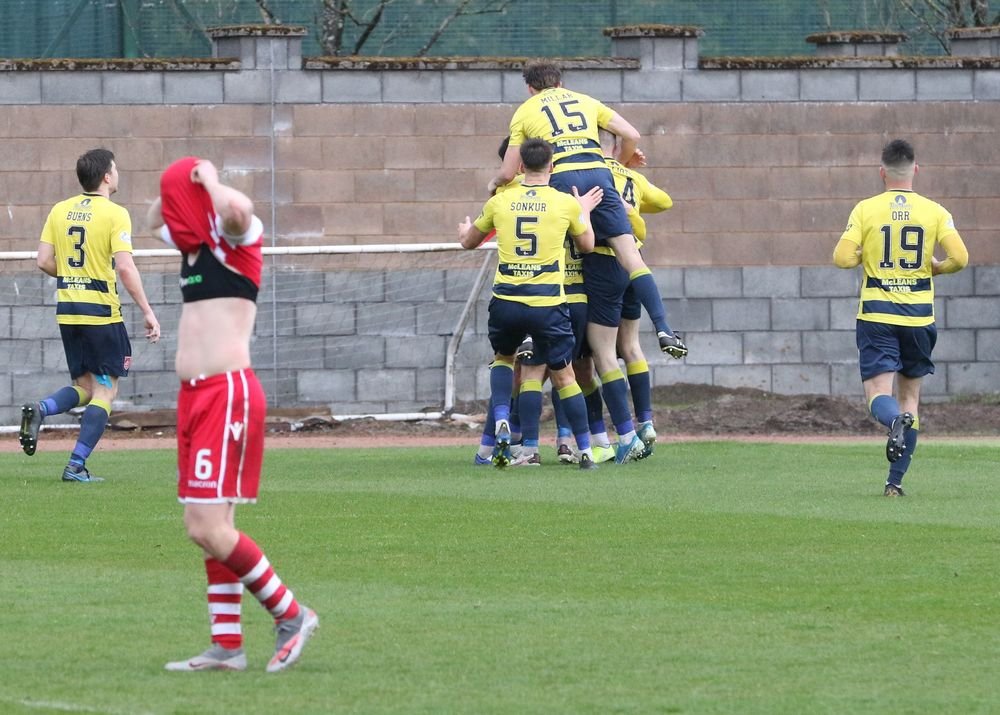 Darryl Duffy’s late header was only enough for a draw at Forthbank, as Stirling Albion struck a dramatic stoppage time equaliser.

Binos defender Jordan Allan turned the ball into his own net to hand his former side the lead, but Ross McGeachie levelled the scoring with an unstoppable header just before the break.

Duffy had Stranraer in front again with just one minute left to play, but a 93rd minute sucker punch from fellow substitute Declan Byrne means we now need either a draw, or a better scoreline than Elgin, on Tuesday night at home to Edinburgh City.

Stevie Farrell made one change from the side which suffered a heavy loss to Elgin four days prior, with goalscorer that night Cameron Elliott handed a starting berth.

The home side created the early chances, with Dylan Bikey lively throughout.

The striker lifted a shot onto the roof of the net within the opening few minutes, before Kurtis Roberts and Ross McGeachie sent efforts wide from distance.

Binos defender Jordan McGregor saw one header cleared off the line and another sail over the bar, before the deadlock was broken just before the half hour mark.

Orr combined with Hilton on the edge of the box, and his low ball was turned into the Binos net by Allan for an own goal.

Stranraer had two chances to increase their lead within minutes of the opener, Hilton’s powerful effort from an angle parried away by Blair Currie in the Binos goal, before Thomas Orr saw a low shot saved.

Bikey was proving a threat for the home side, but Fleming was equal to his powerful strike after a quick break forward.

Albion would find an equaliser with a minute to play of the first half, as Ross McGeachie rose highest to meet a free kick from deep, his header sailing into the back of the net.

Bikey had the ball in the net just after the hour mark, but was flagged marginally offside after collecting a lofted ball forward.

WIth the game becoming cagey as the second half wore on, it set the scene for a nervy final few minutes.

Andy Stirling found space on the edge of the box, but dragged his low shot just wide.

Fleming was called into action once more to deny Sean Heaver, who later lashed wide with two minutes left to play.

It looked like game over when substitute Duffy popped up to meet Elliott’s cross and head home a crucial second goal against his former club.

But an even later goal would arrive in the third minute of stoppage time as fellow sub Declan Byrne slid in on the rebound to earn Stirling a share of the points.