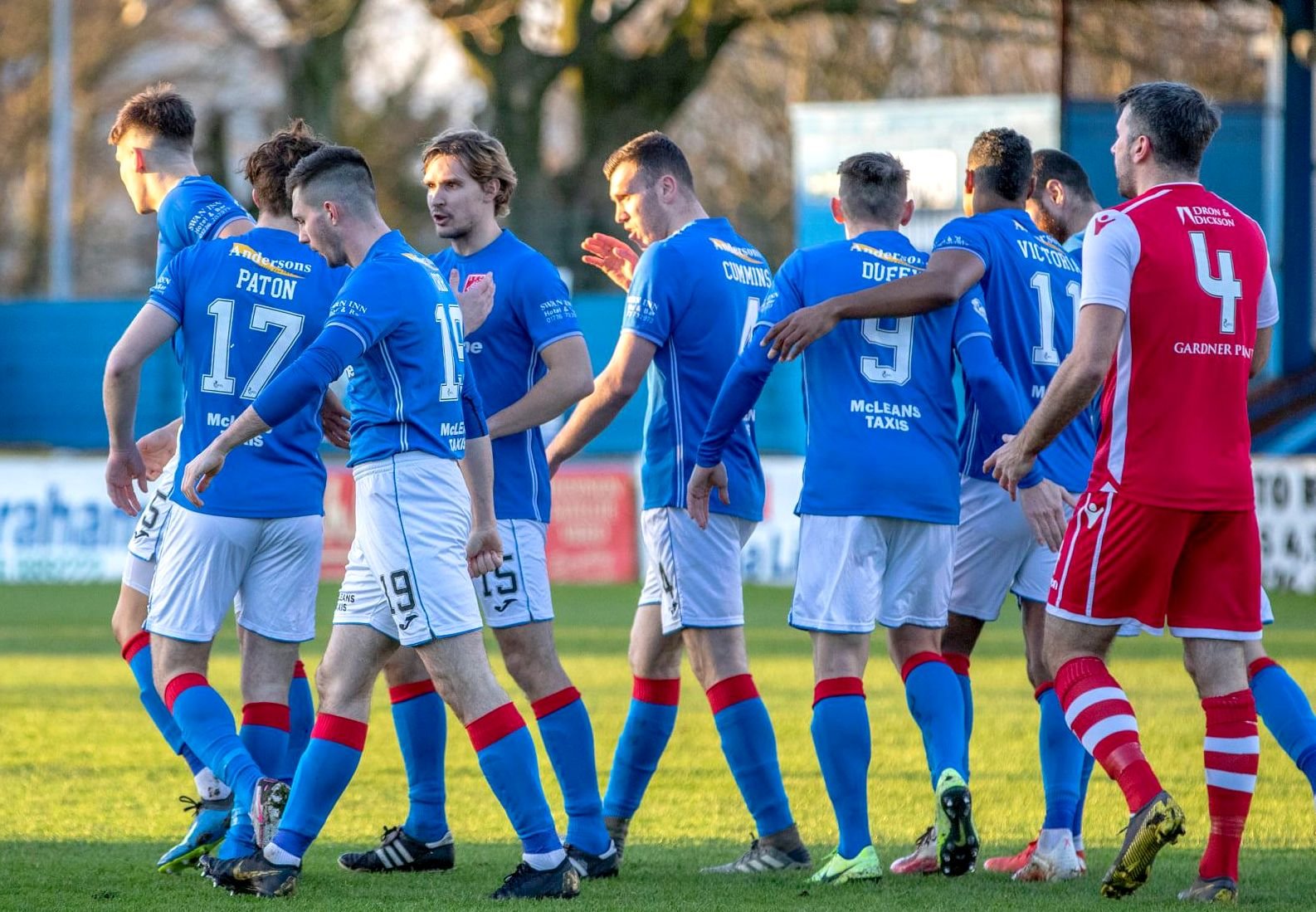 Stevie Farrell has described the rest of the season as “seven cup finals”.

The Blues face Stirling Albion on Tuesday night, before taking on Stenhousemuir on Thursday and then wrapping up the 18-game portion of the season away to Albion Rovers next Tuesday.

Every point is precious if the club wants to firstly make the top five ahead of the split and then the top four if they want to make the play-offs.

Farrell said: “The busy schedule is the same for everybody.

“We’ve still got massive games of football to play and it is not over.

“It is not over regardless of what some people will say and do.

“It is not over and I have told the players that – we’ve got seven cup finals.

“They are massive games of football.

“We have just got to go and win the next game of football but if we play like we did, particularly in the first half on Saturday, we will not win many games of football.”

If the Blues are to have ambitions of playing in the play-offs at the top of the table, they cannot afford too many more defeats like that against Edinburgh City on Saturday.

Liam Brown’s early header was enough for the capital side to take all three points and leave Stranraer looking up the table.

The manager took “full responsibility” for defeat on Saturday.

He said: “I picked a team purposely because I thought we could hurt them in certain areas of the pitch and it never worked.

“You can blame X, Y and Z but ultimately I take responsibility today; that’s my fault.”

The manager predicted there would be a lot of twists and turns left in the season as the club aim for an immediate return to League One.

Stirling drew 2-2 at Stair Park earlier in the season and have their own play-off challenge to try to strengthen.

Farrell said: “There’s a lot of the season left.

“Our first objective is to get into the top five and we are still sitting in the top five.

“But we know we have got to try to win our next two games if we are going to have any aspirations of getting into the top four.”

Play-off challengers Stranraer and Stirling Albion had to settle for a draw in a game which saw both teams in the lead.

Tom Orr continued his fine form with an early goal but the visitors were given the chance to level things soon after. Darryl Duffy was penalised for a high boot and Andy Ryan smashed home the spot kick.

Stirling would then get their noses in front when David Wilson’s shot hit Connor McManus and wrong-footed Greg Fleming. However, Duffy would make amends in the second half when he collected a long ball and smashed home from outside the box.

Tuesday night will see Duncan Williams officiate his third Stranraer fixture in less than a month.

The referee was in the middle for our defeat at Queen’s Park, which saw Kieran Millar sent off for a second bookable offence, as well as our trip to Cowdenbeath.

Ayrton Sonkur’s second half strike earned a point for the Blues at Central Park after the home side had taken the lead through Gavin Morrison.

It is Mr Williams’ first visit to Forthbank this term, but he did take charge of their contest with Edinburgh City at Ainslie Park. It seemed a straightforward win for the visitors, with Jack Leitch, Declan Byrne and Andy Ryan all finding the target in the first half. However, the capital side came fighting back after the interval. Robbie McIntyre made it 1-3 before Liam Brown narrowed the gap further. However, there would be no equaliser.

Mr Williams’ last visit to Forthbank came at the beginning of May 2019 when, coincidentally, Edinburgh City were the visitors. There would be no five-goal thriller on that occasion though, with a goalless draw the outcome.

You can watch all the action live from Forthbank through the home club’s streaming service (kickoff 7pm).