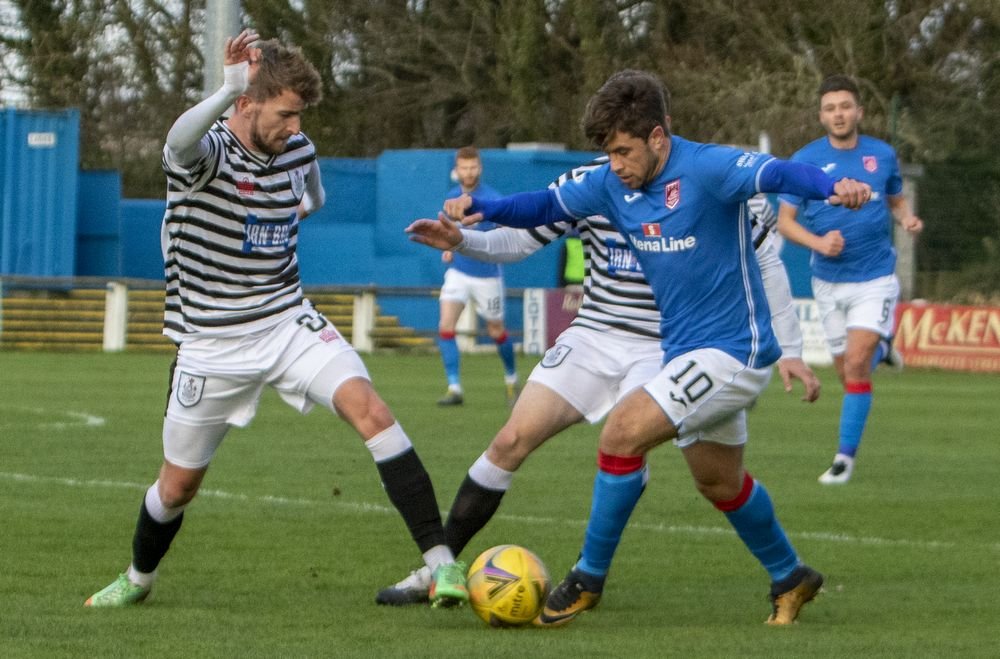 In a season like no other, it is only fitting that the conclusion to the campaign is different as well.

Stranraer will face the other teams in the top five in Queen’s Park, Elgin City, Stirling Albion and Edinburgh City in their bid to secure a place in the play-offs.

Stranraer manager Stevie Farrell is a fan of the format and was looking forward to the action getting underway.

First up is a trip to The Falkirk Stadium and a contest with Queen’s Park on Friday.

Farrell, who has already been in touch with Ray McKinnon to congratulate him and his team on winning the League Two title, said: “My best wishes to them and we know we are going to go and play a good team.

“I think they still have a desire to go and finish the league season unbeaten.

“They would be one of only two clubs that are still able to do that alongside Rangers.

“They will no doubt be going out to try to ensure that they do that.

“People will say that they will take their foot off the gas – and I hope they do – but I doubt it.

“We know we are going to have to put in another big performance to get anything from the game.”

The Stranraer boss spoke to the club website on Thursday, just half an hour before he was due to meet some of those players struggling to make tomorrow’s game.

Lewis McIntyre is still on the absence list, with Adam Cummins also missing in recent weeks.

Farrell said: “I’m actually sitting in my office right now and waiting on my physio and three players coming in to get treatment.

“This is the hospital ward tonight!

“Grant Gallagher, Sean Burns and Adam Cummins are all coming in tonight.

“Sean Burns and Grant Gallagher we will just need to assess over the next 24 hours.”

Cummins is due to go for a scan on his knee injury on Saturday while Burns and Gallagher are both struggling with hamstring injuries.

The Blues come into the game on the back of a 2-0 win over Albion Rovers on Tuesday night.

Goals from James Hilton and Joao Victoria gave the visitors all three points and Farrell felt the team was heading in the right direction.

He said: “It was always going to be a challenge to bring them back to the levels they were at before lockdown.

“Let’s be honest, the levels we were at, we were probably one of the form teams in Scotland, never mind League Two.

“It was always going to be difficult to bring them back to that after a nine-week lay-off but slowly but surely they have been coming back to that.”

Stranraer’s return from lockdown did not quite go to plan as Queen’s Park picked up three points at Hampden Park.

The Blues came into the game hoping to close the gap on the league leaders. However, first half strikes from defensive duo Michael Doyle and Lee Kilday put the Spiders in the driving seat.

Bob McHugh scored from the penalty spot in the second half before Kieran Millar was shown a red card in the final 10 minutes.

Barry Cook takes charge of a Stranraer game for the third time this season, with all three coming on the road.

The most recent came at Somerset Park in the League Cup. On that occasion, Darryl Duffy scored early on before Luke McCowan levelled things just two minutes after the restart. The hosts would go on to win 6-5 on penalties.

Seven days earlier Mr Cook was in the middle for Queen’s Park’s trip to Elgin City. On that occasion, the newly-crowned champions emerged victorious thanks to a first half strike from Darren Lyon.

The last home encounter involving the Spiders was back in December 2019 when Stirling Albion made the trip to Hampden Park. Dylan Mackin scored first for the visitors but a late Ryan Finnie effort ensured the spoils were shared.