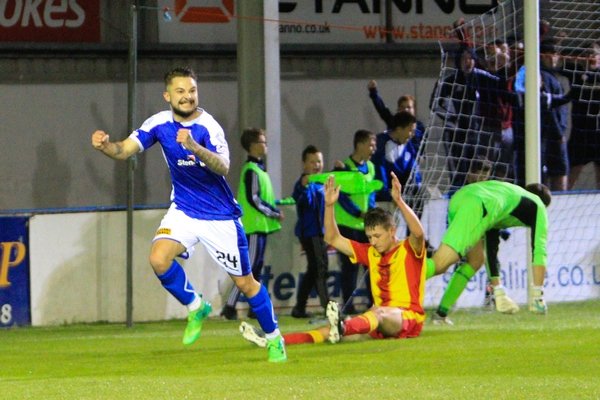 DANNY Stoney has had a tough couple of years.

The striker, who recently returned to senior football after a long-term knee injury, initially emerged through the Rangers youth system.

Stevie Aitken brought the youngster to Stranraer on loan from the Gers in 2014, and he featured primarily as an impact sub throughout the season.

His pace and energy gave the Blues attack an added dimension as they contested the 2014/15 League 1 Championship, only to fall at the final hurdle.

It was a bright era at Stair Park, and one which Stoney has fond memories of.

Speaking to the official website, he said: “It was a great bunch of boys we had. It was some team.

“We went into every game thinking – knowing – we were going to win the game.”

As well as benefitting Stranraer, the temporary move offered the youngster a chance to get a taste of senior football.

He scored his first two senior goals in consecutive games, against Peterhead and Ayr United, and also chipped in with his fair share of assists.

With first team experience under his belt, he returned to the Ibrox club in summer 2015 hoping to finally make his mark.

Stoney recalls: “I went back to Rangers and did pre-season.

“A couple of weeks into the 20s season, the head of youth Craig Mulholland took me into his office and just said ‘Look, there’s too many guys in front of you in the first team, I think it’s better off you just go and find another club’.”

Having been dropped by the Glasgow giants, Stoney’s agent indicated that Premiership strugglers Kilmarnock were interested, but an unfortunate injury would rule out any move to Rugby Park.

Stoney said: “I went in to train with Kilmarnock first team.

“I was actually playing against Jamie Hamill that day, and we were playing a bounce game.

“Kilmarnock weren’t doing that well in the league that season – it was an international break, so they were training the full weekend.

“About half an hour into the bounce game, I jumped up for a header and landed on one leg, and I’ve come back down and my knee’s just totally went away from me.

“It felt like I’d been shot in the knee.”

With the opportunity gone, and a long wait for a knee operation, Stoney started his rehabilitation, but the football bug caught up with him.

In February 2016, with Brian Reid’s Stranraer desperately seeking a striker, he answered the call.

Stoney said: “I just let it heal for a couple of months, and then I was getting bored.

“I was wanting to get back into it because I had to wait 9 months for my operation for my knee.”

Danny played as a trialist in away wins at Albion Rovers and Forfar, impressing in his appearances off the bench.

But with the Blues ready to offer him a deal, a Tuesday night run out for the under 20s at Somerset Park on 9 February 2016 proved a step too far.

Stoney recalls: “He (Reid) was looking to offer me a contract at the end of that week.

“But then obviously, I got the injury.

“It was actually the same injury that I’d got when I just left Rangers – I tore the lateral meniscus in my knee.

“I was gutted at the time, obviously, that I couldn’t get back playing football again.

“I just made it worse by playing on with it”.

With lingering injury worries, Stoney tentatively returned to action with junior side Neilston.

After finally undergoing his knee operation in December 2016, he made enquiries about a return to Stair Park.

Stoney said: “Obviously I was at Neilston Juniors last year, but that wasn’t really the level that I wanted to play at.

“I texted big Eric (Phillips), the goalkeeping coach, to see if I could come in and do a bit of physio work.

“The gaffer’s asked me to come in in pre-season and see how I do, and he’s offered me the contract, which I was delighted over.”

Many people would see his comeback as a success in itself, but Stoney remains as keen as ever to get on the scoresheet.

And despite having to wait for a starting place, the striker is loving being back at Stranraer.

He said: “What I really enjoy about being at the club is the training the gaffer gives us, and Tiff (Aitken) and Wads (Alan Waddell)”

“What I really needed was to get fit again and the guys have definitely done that.

“I feel as if I’m nearly at the top of my fitness, and nearly ready to start in games.”

On Friday night, Stranraer welcomed Partick Thistle Colts in the IRN-BRU Cup 2nd round, and Stoney was introduced as an 82nd minute substitute.

With the tie finely poised at 1-0 in stoppage time, he fired home his first goal since returning to the club to put the Blues well and truly out of sight.

It was a special moment for the frontman, but he insists it’s only the beginning.

He said: “It was just relief more than anything.

“I want to kick on from there, and score a few more goals over the course of the season”.