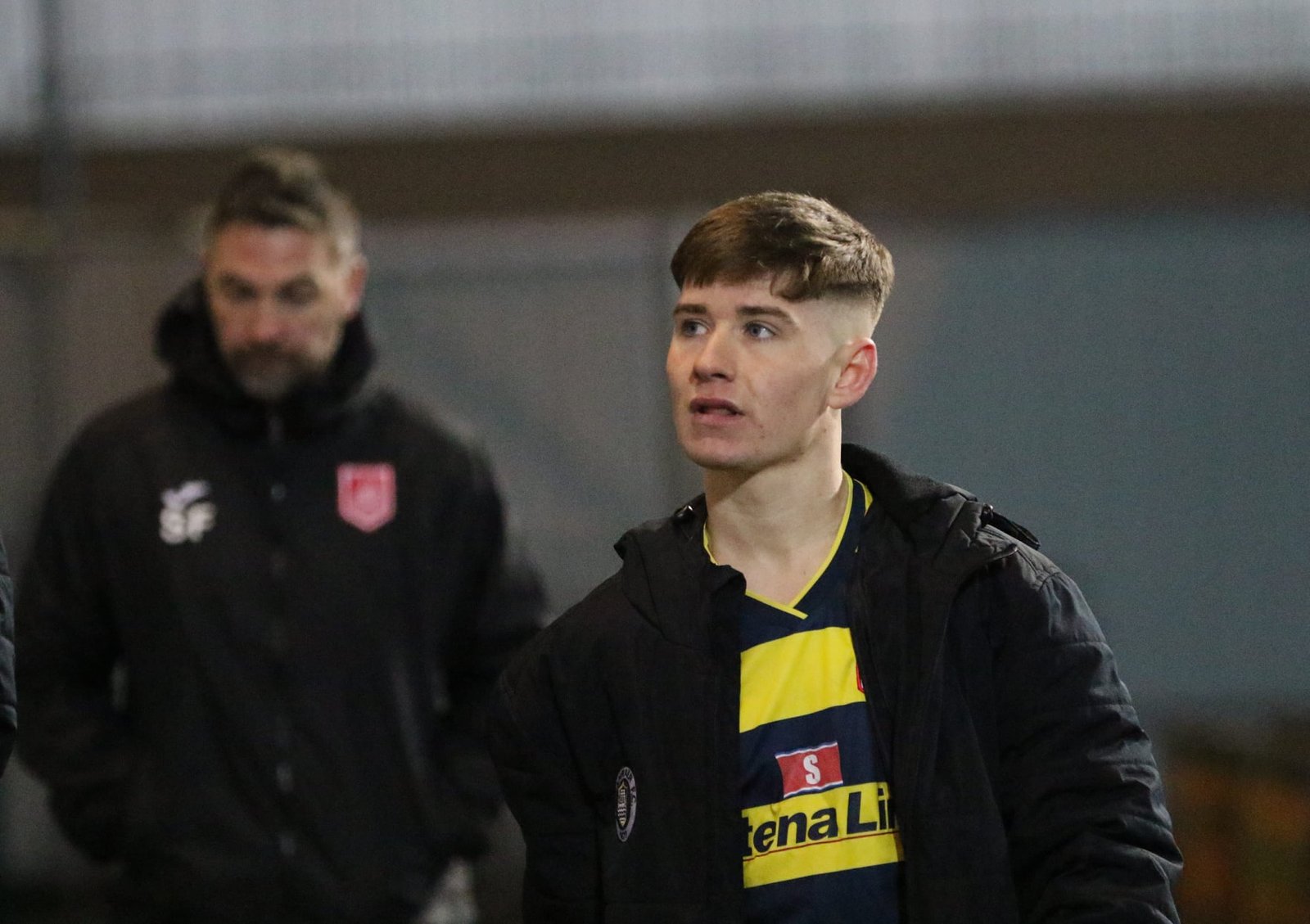 Matty Yates scored the only goal as Stranraer inflicted a stunning first league defeat of the season on the newly-crowned champions.

Although they met their opponents with a “guard of honour”, it was the Blues who merited applause as they left Falkirk Stadium with all three points.

The two combined in the early stages as Stranraer threatened the Queen’s Park goal.

Victoria made a driving run forward, playing the ball infield to Ruari Paton, whose curling strike cannoned off the post.

Five minutes later, James Hilton played a one-two with Paton and played Yates through on goal, his pass was met by the sliding Victoria but the winger was denied by home keeper Ryan Mullen.

Mullen picked up an injury just 25 minutes into his debut and had to be replaced by Jacques Heraghty.

Unfortunately for Heraghty, his first action would be to pick the ball out of his own net.

Ayrton Sonkur’s hopeful punt upfield was collected by Stuart Morrison, but the home defender’s short back pass allowed Yates to race in and intercept.

The youngster rounded the substitute keeper and aimed a shot at goal as Morrison rushed back to clear, but he could only delay the inevitable as the ball trickled over his foot and crossed the line.

With Queen’s Park limited to half chances, Yates almost doubled his tally early in the second half as a cross turned shot rebounded off the top of the crossbar.

The Spiders made a triple change just after the hour mark, but Stranraer would continue to create opportunities and restrict the home side.

Neat play on the counter between Hilton and Victoria allowed the former an attempt on goal, but his shot flashed over the bar.

With ten minutes remaining, the Spiders would have their best chance of the game as Morrison looked to redeem himself from a corner kick, but the defender’s header crashed off the crossbar, with a later effort sailing off target.

Stranraer twice came close to increasing their lead in the closing stages.

Paton was in the right place at the back post to meet a cross from substitute Andy Stirling, but saw his shot blocked at close range.

And Victoria strode onto a through ball from Thomas Orr, but took too many touches and allowed Spiders midfielder Luca Connell the chance to recover possession.

In a final twist, Victoria was sent off for a seemingly innocuous brush with David Galt.

The Queen’s Park winger hit the deck at the feet of Victoria, who motioned to accuse Galt of diving and gave him a one-handed push to the back.

Galt responded by pushing his head into Victoria’s, and the Portuguese forward ushered him away with his hand.

But it would be Victoria who saw red, with Stranraer’s players incensed by the decision.

However, it was too late to prevent the visitors holding on to record a memorable win at the Spiders’ temporary home.

Wins and clean sheets in the last four games will be a welcome boost for the Blues squad as they face three tough fixtures against Elgin, Stirling Albion and Edinburgh City in the next few weeks to confirm their place in the playoffs.