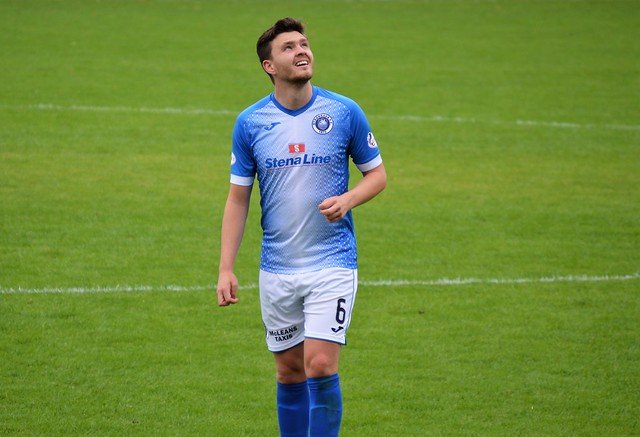 HALFWAY through the season, 18 games left to play and the possibility of 54 points to be won.

Stranraer will likely need to pick up a fair few of those points between now and May if they are to remain in League One.

Connor McManus has been at the heart of the Stranraer midfield and knows things need to change and quickly.

Speaking after defeat to Forfar Athletic on Saturday, he said: “I think we have got to the stage now where we cannot be looking too far forward or too far back because I think every game is basically a cup final, particularly with the teams round about us.

“There are a couple of games coming up where if we have anything about us we really need to be going and taking care of them.

“Right now, it is looking difficult but I was here last year and I don’t think many people would have backed us to get out of the situation we were in and we did.

“I don’t want to make excuses but injuries have not been too kind to us, with a few boys playing through the pain barrier just to make the team.

“Hopefully, we can get the wee bit of luck that we are due.

“We have just got to work hard and keep our heads down because there is no other way to get out of it other than hard work, and, hopefully, our luck will change.”

A 4-2 defeat to Forfar at Stair Park last time out left the Blues eight points adrift of their relegation rivals, with Peterhead, who sit eighth, one point better off.

The Blues were up against it last term to stay in the league but found a way to edge past Brechin City and Stenhousemuir.

McManus, who has been one of the very few in Stevie Farrell’s squad to avoid injury this term, was hopeful his team could rekindle the spirit that got them out of trouble last season.

He said: “I don’t think anybody can shy away from the fact that Forfar were the team directly above us and it was a massive game.

“I don’t think there is a lot between the teams but you can see what they have compared to ourselves.

“Maybe, it was just the clinical edge up the top end of the pitch and maybe not giving us too many chances or when they did we just didn’t seem to be sticking them away.

“As I say, there is still a long way to go – we’re not even at Christmas yet – although the gap is now eight points.

“There is belief in that dressing room and hopefully, maybe in January, we can get a wee bit of help to take us back up the league.

“I think in performances throughout the season, we have shown that we are capable.

“Obviously, I was here last year as well and we were in a similar situation and we got out of it.

“There is plenty of belief in the dressing room and hopefully we can get a wee hand here and there and I’m sure we will get out of it.”

This Saturday is a trip to Dumbarton, where the Blues won 12 months ago thanks to a strike from Kyle Turner.

Three points would be a massive boost for the Blues ahead of a January transfer window that is expected to see a few comings and goings at Stair Park.

McManus was hoping to repay Stevie Farrell’s faith in the team.

He added: “Stevie is very passionate and has been very good and very fair to me in terms of playing me.

“It is hard as well because you feel like you have let him down because, as I say, he has been good to me and he has played me.”