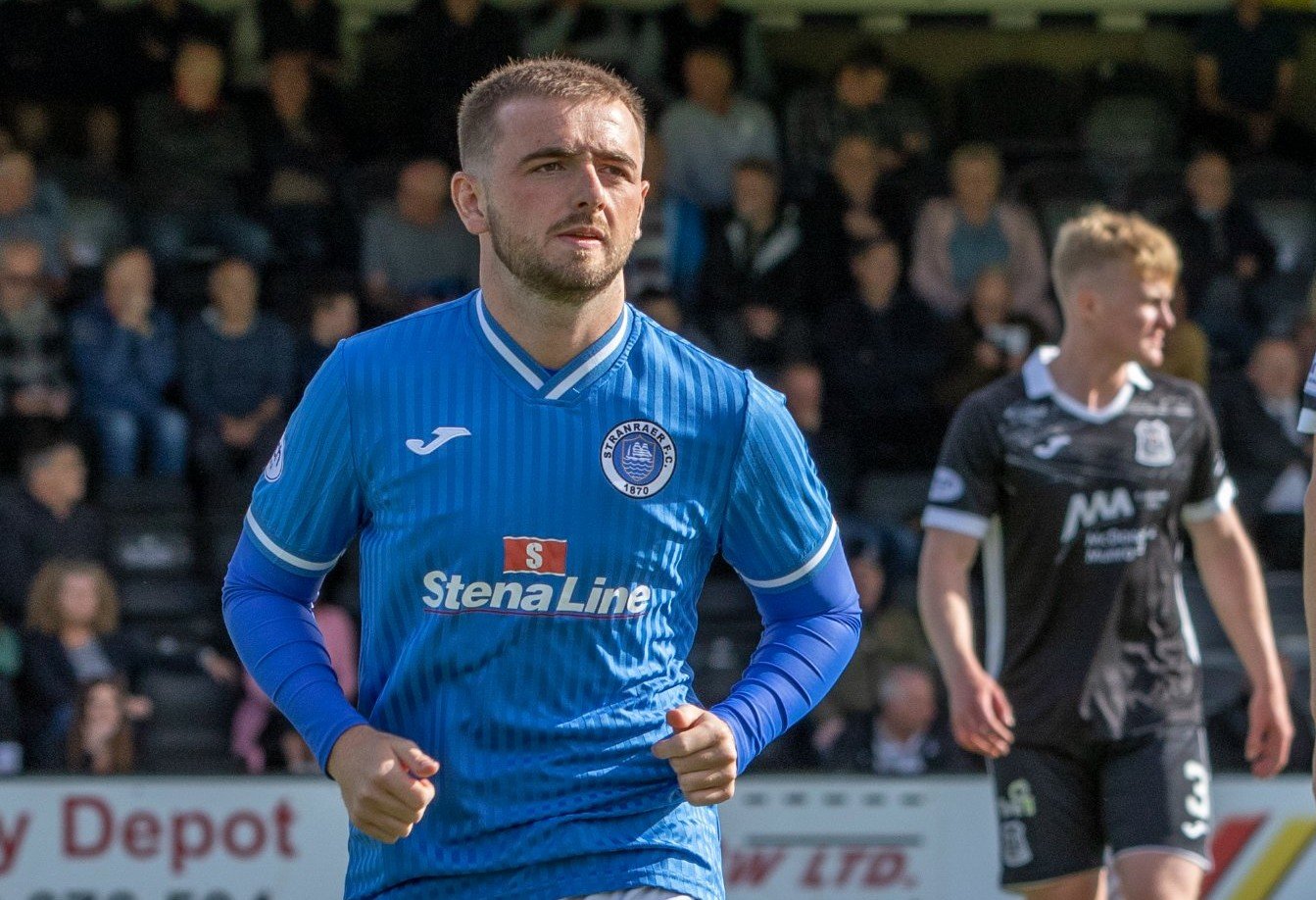 Goalscorer James Hilton is confident Stranraer will not underestimate their opponents on Saturday when they make the long trip north.

The Blues head to Fraserburgh looking to avoid a Scottish Cup upset against their Highland League opponents.

Hilton stressed that overconfidence and complacency would not be an issue having come perilously close to losing to Highland League opposition previously.

He said: “There are no big time Charlies in our team.

“We are not thinking we are going to go up to Fraserburgh and think ‘what are we doing here?’

“We all come from grounded backgrounds in terms of we are working our way up.

“We have played teams like Fraserburgh and know for a fact that the standard is not going to be a massive difference from their quality to our quality.

“We know if we play well we can beat them.

“I remember the Brora Rangers game.

“We went there and they gave us a shock.

“We maybe went there thinking we just needed to turn up and beat them but they battered us for an hour and we managed to scrape an extra time win.

“We know for a fact it is going to be a tough game.”

The 24-year-old found the net against Galabank last weekend with a delicious chip over Greg Fleming.

The goal was Hilton’s fourth of the season and he has his sights set on a record-breaking campaign in front of goal.

He said: “It was definitely one of my better ones.

“My first one for Stranraer when I scored the free-kick against Berwick Rangers is probably my best one.

“That is definitely up there.

“I think we tried everything to score against Annan except shoot from long range.

“I usually try to lob the goalkeeper every week and it does not come off but this one came off.

“I got seven goals before January in my first year at Stranraer and I came out of the team and never played.

“My aim is to have seven before January and then kick on from there hopefully.”

January 1998 was the first and only time Stranraer and Fraserburgh have locked horns in the Scottish Cup.

On that occasion, it was the Broch making the long journey but they found themselves 2-0 down at the interval thanks to a double from Paul Kinnaird.

Kris Hunter pulled one back for Fraserburgh, who had knocked out Clyde in the first round, with four minutes left to ensure a nervy finish but Stranraer held on for the victory and a third round tie with Kilmarnock.

Connor Wood opened the scoring against Civil Service Strollers with just six minutes on the clock. Sean Butcher doubled the lead for the Scottish Highland Football League side just before the half hour mark.

The deficit was reduced with 19 minutes left when Lewis Duffy pulled one back for the Scottish Lowland Football League team but it was not enough.

1. Stranraer fans do not need to cast their minds back too far for the last time they travelled to the Highland League. April 2021 and a trip to the Dudgeon Park home of Brora Rangers. For a long time it looked as if the home side were going through following Dale Gillespie’s penalty after Ayrton Sonkur was penalised. However, with two minutes left goalkeeper Joe Malin diverted the ball into his own goal. Stranraer would go on to win the game in extra time thanks to a first goal for the club from Matty Yates and a stunning strike from Tom Orr.

2. Tomorrow is 11 years to the day since Stranraer recorded their biggest ever win away from home. That came just a few miles east when they travelled to Wigtown and Bladnoch in the Scottish Cup. Sean Winter would score a hat-trick on that occasion while Craig Malcolm and Martin Grehan both bagged doubles. Stuart McColm and Chris Aitken also found the net in the 9-0 win. Stranraer: David Mitchell, Taggart, McKeown, Gallagher, Kane, Stirling, Aitken, Noble, Winter (Shepherd), Malcolm (Moore), Grehan (McColm). Not used: Danny Mitchell and Marshall.

3. Fraserburgh reached the fourth round of the Scottish Cup in 2018. Their reward was a contest with Rangers, who won 3-0 thanks to a treble from Josh Windass.

4. The Bellslea Park side are four time champions in the Scottish Highland Football League. The last of those triumphs came last season when they ended a 20-year wait for the title. They won 30 out of 34 games and finished three points clear of Brora Rangers.

5. The Stranraer squad know all about scoring in the various cup competitions in Scottish football. Seven members of the squad have scored in each of the Scottish Cup, League Cup and League Challenge Cup. Scott Robertson, Grant Gallagher, Craig Malcolm, Scott McLean, Paul Woods, Darryl Duffy and Salim Kouider-Aissa have all achieved the impressive feat.

There’s good news for Stranraer fans everywhere if you can’t make the six hour journey north for our cup tie on Saturday.

With streaming restrictions relaxed for cup competitions, the home side are providing live coverage via their Pixellot automated service for £8, both in the UK/Ireland and overseas.

If you’re travelling up, admission at the gate is £10 for adults and £5 for concessions.