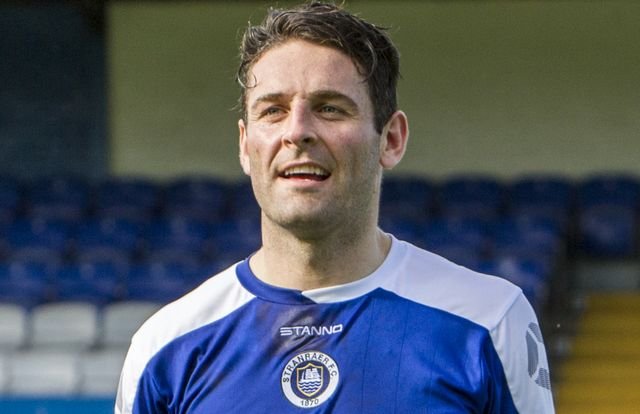 IT WAS not so long ago that Frank McKeown was busy wondering whether he would get to play golf this week.

Now, his attention is firmly focused on the green grass of Stair Park rather than fairways and greens of elsewhere.

A calf injury – sustained during his first spell with Stranraer – had ultimately forced the former central defender to call time on his playing career but he had ambitions to step into the coaching side of the game.

That was until a phone call from Stranraer boss Stevie Farrell.

He said: “I was loving not having the commitment of football; absolutely loving it.

“There were only a couple of things that would have brought me out of retirement.

“I had small suggestions of being involved in other ways.

“I had been offered an assistant manager job at a Junior team.

“I had also been speaking to certain people about going to watch games for some Premiership teams and a bit of scouting but there was never really anything that I thought ‘that’s the thing that would entice me out’.

“Up until that point, up until the Tuesday, I never thought that anything would happen.

“The only thing on my mind that day was whether I was playing golf at the weekend!

“That was literally the only thing I was thinking about because I was off my work as well.

“I could not say no to the offer, absolutely not, and I am delighted to be back now.”

McKeown said the opportunity to link up with Farrell and former team-mate Chris Aitken proved too hard to resist.

McKeown said: “Stevie phoned me one Tuesday at about 4pm and when he phoned I thought ‘what is he phoning for?’

“He asked how I was doing, what was happening in terms of football and I just explained to him that I have got a bit of an injury and have done for a few years.

“It is now at the stage where it just does not go away, I cannot play and, unfortunately, had to retire full time and retire completely because the injury will just not go away.

“He said ‘alright, the playing days are over, how would you feel if there was a coaching role available?’

“He asked if I would be interested in joining the club.

“That was on the Tuesday and I knew by the Wednesday morning I was joining.”

The full-time firefighter is, obviously, no stranger to Stair Park and made almost 200 appearances over two spells with the Blues.

He joined the club from Arthurlie, where he played alongside Alan Waddell, whose departure, ultimately, opened up the door for McKeown’s return; this time in a non-playing capacity.

McKeown added: “When Faz had said there might be a job opportunity, he explained to me the situation with Alan Waddell.

“I knew Alan, I had played with him, so it was always a role that I wanted to take up but the one thing I wanted to do first of all was speak to him myself.

“I wanted to speak to him because obviously he has done a great job.

“As I say, I know him and wanted to make sure he was comfortable with the situation.

“I said that to the gaffer when he spoke to me and he completely understood.

“I just felt it was the right thing to do and the honest thing to do, to speak to Alan first before I accepted the job.

“He gave me the go ahead to move into his shoes if you like.

“Then, it was always going to happen and I phoned the gaffer.

“In terms of coaching, it was always something that I wanted to do.

“Even as a player, I always appreciated what the manager I was working under was trying to do.

“I always thought about sessions, training, analysing games and how I could benefit as a player and improve and improve the players around me and stuff like that.

“I always enjoyed that side of the game and always wanted to go into coaching.”

McKeown, who also played for Alloa Athletic and Greenock Morton during his playing career, will act as a link between the players and the rest of the management team.

“Of course, it is different because I am thinking that I need to prepare along with Chris and Stevie for the training session and for Saturday.

“My first and foremost thought is that the players enjoy it.

“I believe if they enjoy coming to the club, coming to training and playing on a Saturday then we will be successful.”

The former defender was in the dug out for the first time when Stranraer travelled to Annan last month.

The Galabankies would emerge victorious on that occasion but McKeown said: “I loved it, I absolutely loved it.

“Obviously, the gaffer was away due to other commitments and Tiff took the team.”

However, his role will be limited to purely a non-playing capacity.

That calf injury is not something that is likely to go away with McKeown happy to focus his impact from the sidelines.

He added: “I was on the list for an operation away back last year and I cancelled that because I thought it was a very slim chance that everything would be fixed.

“So, I took myself off that list purely because I did not think it was effecting my day to day living, which it doesn’t.

“However, when I start going to play football, that is when it starts to flare up.

“I’m purely here as a coach and I will be concentrating on that side of things going forward.

“It is a calf injury, which I actually did, believe it or not, for Stranraer against Ayr at Somerset Park four or five years ago.

“It was the season we were going for the league and it has never been the same since.

“It must have been around February that I got the injury and up until the end of that season I possibly trained a handful of times just because it was so sore and I played on the Saturday.

“I played through the pain barrier for about six or eight games trying to get us over the line to win the league and unfortunately we fell at the last hurdle.

“That is probably the reason I cannot continue playing today because obviously I never really allowed it to heal.

“I considered taking jags and I remember playing away to Morton at Cappielow and not even doing a warm-up and just playing 90 minutes.

“It was just horrendous and how I played back then is beyond me.”