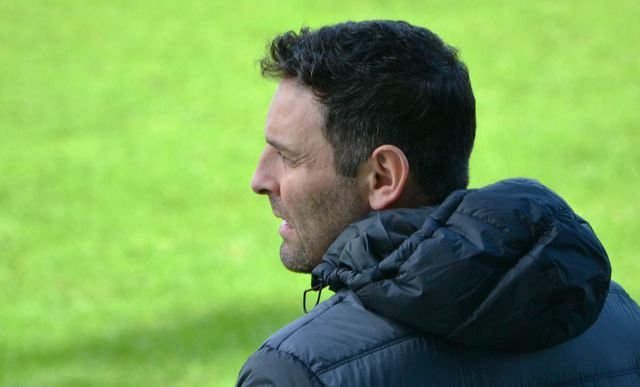 Stirling crosses the ball in, Longworth takes a touch and then lifts his shot into the top corner before running to the pocket of Stranraer fans.

It is a scene which is etched into the memory of every Stranraer fan.

Now, former defender Frank McKeown, who captained the side that day, insists getting a result at Ibrox as a coach would match getting a draw there as a player.

The first team coach was part of Stevie Aitken and Stevie Farrell’s playing squad who travelled to Ibrox on Boxing Day 2013.

The hosts were going for an impressive 21 victories in a row but the run was halted thanks to Longworth’s injury time goal.

McKeown said: “It is the pinnacle when you play the Old Firm.

“It is what every player wants to do in Scotland and hopefully come Friday night we are celebrating a good result.

“Then, obviously, I can attach that to playing there as well.”

McKeown recalled Rangers were “steamrollering” everyone as they looked to get promotion from League One at the first attempt.

The Ibrox side’s only slip up until that point had come against Forfar on the second day of the season when Gavin Swankie had scored in extra time to secure a 2-1 win in the League Cup.

McKeown described the draw at Ibrox as being “right up there” in terms of the highlights of his career.

The 33-year-old said: “I remember obviously Andrew Dallas gave a dodgy penalty against me, which to this day, Nicky Clark, who shall we say fell very easily, winds me up about.

“I think actually that helped us.

“That early goal for Rangers helped Stranraer in a strange way because they took their foot off the gas pretty early and it gave us a chance to settle into the game.

“We did that really well and actually we were excellent that day.

“We were unlucky not to score earlier than we did and I spoke to a lot of people after the game who were Rangers fans who thought the goal was coming.

“It was probably a point we deserved that day.”

McKeown, who played almost 200 games for Stranraer over two spells, was realistic and said it would be a tough tie.

However, he pointed to the tendency for there to be a cup shock somewhere.

He added: “At the end of the day, we will go and give a good account of ourselves.

“There is always one upset on a cup weekend that people cannot believe and who is to say that it cannot be us?

“There is no reason why it cannot be us.”

Stranraer’s preparations for the game were disrupted when they were left on the sidelines at the weekend.

Montrose had been due to visit Stair Park but the game, like many across Scotland, was postponed due to a waterlogged pitch.

That tie will have to be rearranged with Stranraer attempting to secure three much-needed points to boost their League One survival hopes.

McKeown said: “I would prefer to play Montrose on Saturday.

“I would prefer to play Montrose than Rangers, to be honest.

“That’s just because the league is our bread and butter at the end of the day.

“I know it sounds cliched but it is the absolute truth.

“I would rather we played Montrose and got three points to get us out of situation we are in.”

He told the club website he was “absolutely loving it” off the field.

McKeown played alongside Chris Aitken, who was named on the bench for Stranraer against Forfar Athletic just before Christmas.

However, McKeown revealed a long-standing injury has ruled him out of any potential comeback… but not through a lack of trying.

He said: “I would love to come back, absolutely love to.

“It is something that I have obviously thought about but it is just an injury that I have got, which will not go away.

“Sadly, even just last Wednesday, was my last throw of the dice.

“I had to retire from Alloa when it got to the stage where it was just reoccurring, reoccurring and reoccurring.

“It was my last throw of the dice on Wednesday when I went and saw a top consultant.

“He deals with Celtic and Rangers and all that sort of stuff and he basically said to me there does not appear anything obvious [in terms of something wrong].

“He could open me up and have a look and see what is in there.

“However, when I did have the injury away back then and I played through it because I was hoping we were going to win the league that year.

“I was taking painkillers, not training for eight weeks and I basically played eight games with a torn calf and I think it is just permanent damage.

“Unfortunately, there will be no boots going on any time soon!”