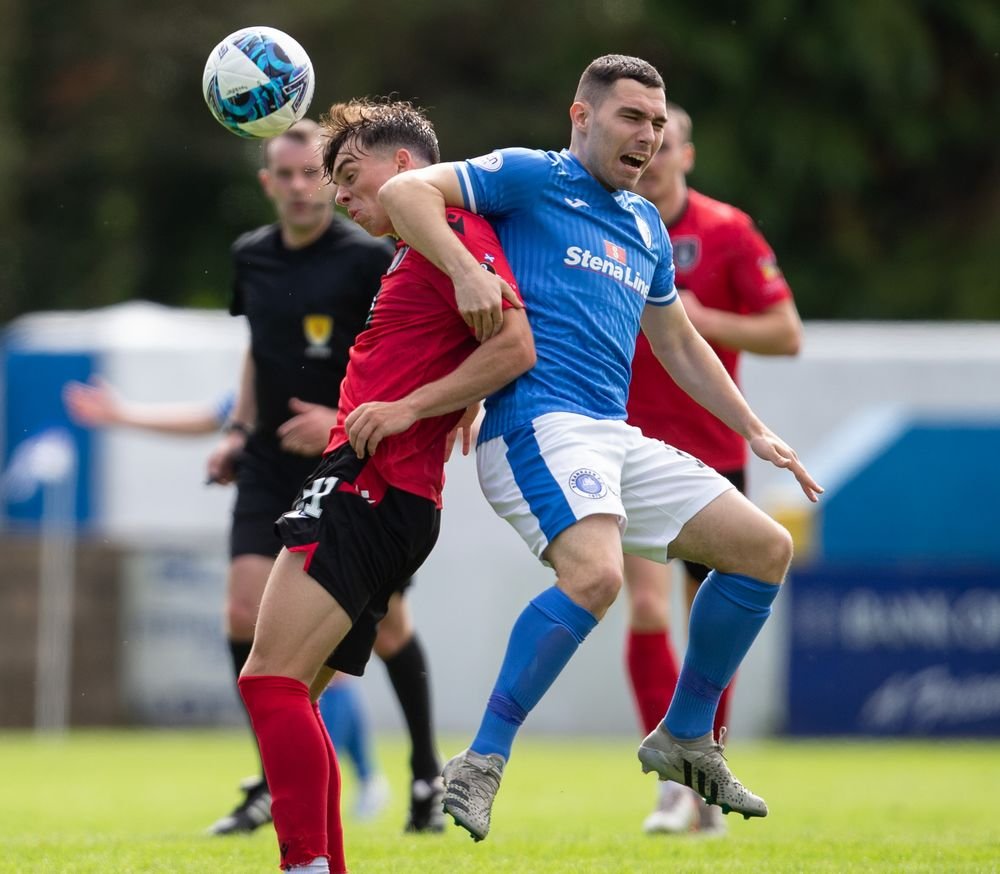 New signing Dylan Forrest is hoping to show former club Hamilton Accies that he has progressed as a player.

The midfielder spent seven months in South Lanarkshire after leaving Celtic in 2019.

Now, after impressing as a trialist in pre-season, Forrest has put pen to paper on a deal with Stranraer.

He made his debut in Saturday’s 5-2 defeat to Queen’s Park and was keen for the team to get off the mark when they travel to the Fountain of Youth Stadium for the second game in Group H of the Premier Sports Cup.

He said: “It was good to get used to the pitch and surroundings.

“We rest, recover and pick our chins up from this.

“We go to try to put right the wrongs on Tuesday night and to get a good result.

“I had a brief spell with Hamilton so, hopefully, we can go in there get a result and turn them over.

“My time at Hamilton was good, it was short, but I probably did not do as well as I wanted to.

“That was my own fault at the time as well probably.

“Hopefully, I can go there and show that I have improved as a player and show what I can do.”

It was an entertaining opening day at Stair Park as a Simon Murray double and a strike from Grant Savoury seemed to have the visitors on Easy Street.

Instead, an action-packed final couple of minutes of the first half saw a further three goals scored.

However, before home fans could think too much of an impressive comeback, Murray extended the advantage to two once again.

Forrest said: “Straight from kick-off, that goal took it right back out of you.”

He scored against his former employers in pre-season and felt he had settled in well alongside his new team-mates.

Speaking after Saturday’s contest, he said how the standard differed at League Two compared to the tier below.

He said: “Definitely, the training and stuff has been much more intense.

“The standard and the standards that the players set and the manager sets are a lot higher.”

While many managers will say that the league is the priority, Forrest was keen to get a winning run going as soon as possible, starting with his old club.

He added: “Today was much more competitive than the friendlies.

“You don’t want to come here and just get fit for the season.

“Every game is a must win game and that is the attitude that we go in with.”

Orr broke the deadlock in the first half. Ruari Paton won a loose ball in midfield before exchanging passes with Kieran Millar. The striker then found Orr, who fired through goalkeeper Ryan Fulton.

Hamilton found an equaliser through Hakeem Odoffin’s header from close range but the home side would not be denied. Substitute James Hilton swung the ball into the back post and fellow replacement Duffy nodded home.

1. Youngest member of the squad George O’Connor had not even blown out the candles on his second birthday cake the last time Stranraer visited New Douglas Park. The hosts were 1-0 winners on that day and the Stranraer team on March 28, 2006, was: Corr, Keddie, Gilfillan (Wingate 73), Higgins, Swift, Payne, Henderson, Hamilton, Aitken (Sharp 73), Hinds, Moore (Martin 47). Not used: Morrison.

2. Stranraer and Hamilton fans have to cast their minds back to 1980 for the last cup clash away from Stair Park. Hamilton won the first leg 5-1 before completing the job with a 2-0 triumph in Wigtownshire.

3. There could be ‘one’ familiar name among the Hamilton players for Stranraer fans. Ryan Oné, son of Armand Oné, made his debut for the Championship side on Saturday against Dundee.

4. The last time Stranraer played on a Tuesday night was at the end of August last year. Liam Buchanan had opened the scoring for Cowdenbeath but two goals in the final seven minutes saw the Blues return from Central Park with a 2-1 win. Josh Rennie brought Stranraer level and Grant Gallagher scored in stoppage time to wrap up the win.

5. Queen’s Park took a 4-2 lead into the half time interval at Stair Park on Saturday. The last time Stranraer were involved in a game with six goals in the first half was August 2008. Ryan McGuffie, Brian Wake and Erik Paartalu scored for Greenock Morton with Iain Russell bagging a double. Craig Frizzell netted for the Blues. Morton would go on to win 6-3. Wake scored again in the second half, with Stuart McColm and Andy Gibson finding the net for Stranraer.

Admission is on a ‘pay at the gate’ basis, with prices as follows:

Accies have indicated that they will not be offering a live stream of Tuesday’s contest.