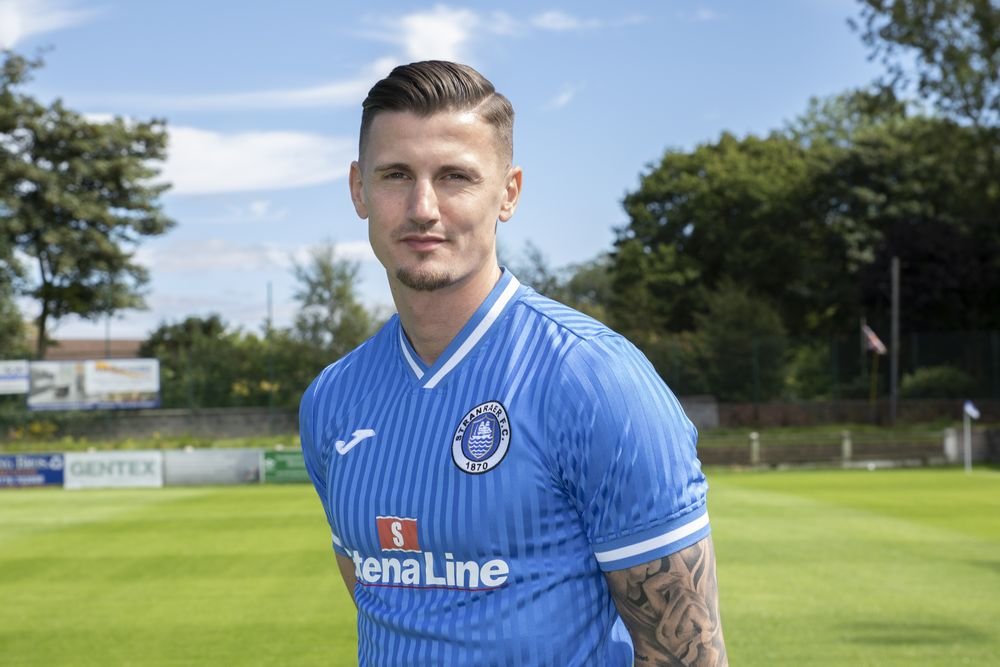 Goalscorer Sean McIntosh is determined to help Stranraer finish 2022 in the play-off spots.

The club’s form at Stair Park since the beginning of the campaign has been impressive with only Elgin City leaving with three points in League Two.

In contrast, Stranraer’s form on their travels has been the complete opposite, with just draws at Elgin and Annan.

McIntosh felt it would be “a massive boost” to finish the calendar year with points against East Fife on Saturday and Bonnyrigg Rose next Friday.

He said: “It would be massive, absolutely massive.

“I think if we finish this year strong, whether it is six points out of six or four points out of six, whatever it may be, it is something we can build on and take real confidence going into the New Year.

“I think it will be a really, really big boost for us.

“It is just trying to rectify that away form and once we do that I’ve no doubt we will be up there challenging in the play-off spots.

“We have got a really, really strong home form and it is just about building on that and trying to bring it into away games.”

The strong home form was demonstrated last time out when the Blues picked up a 3-1 win over Stirling Albion.

The Binos are pushing Dumbarton at the top of the table and comfortably took three points in the reverse fixture with Jamie Hamill’s side.

However, it was roles reversed as McIntosh scored his first goal for Stranraer to keep up the play-off charge.

The goal, his first since a last minute strike for Airdrie in a 3-0 win over Arbroath in April 2019, put Stranraer in front after Dylan Forrest also scored his first for the club.

The defender said: “I was delighted.

“I feel like it has been a long time coming.

“Not that I’m a prolific goalscorer – I score the odd goal here and there – but it is definitely something that I would like to add to my game.

“It is maybe something that I am maybe missing from my game but I have found myself in the right area a lot of times and maybe just not found that finishing touch.

“At the weekend, it meant a lot to me.

“It was a good moment for myself and to get us in front.”

A late, late goal for the visitors ensured Stranraer and East Fife had to settle for a share of the spoils at Stair Park in August.

Stranraer had already survived a couple of early scares when they made the breakthrough. Anton Brady did well in the middle of the park before sliding the ball through to Paul Woods, who tucked home a composed finish.

The visitors to Stair Park found an equaliser when Ryan Schiavone’s shot took a slight deflection off Luke Watt and found the top corner.

Watt then bundled home from close range from Josh Walker’s inviting free-kick. Former East Fife man Watt came close to doubling his tally but an off the ball incident saw his game ended early and Stranraer were down to 10 men.

Then, in stoppage time, Jack Healy weaved through the defence before firing home an equaliser.

1. Goalscorer last time out, Sean McIntosh has never finished on the losing side when he has found the target. His previous four goals came while he was at Airdrie and helped the Diamonds to three wins and a draw.

2. Stranraer’s last victory at Bayview Stadium came on April 28, 2018. Future East Fife man Scott Agnew scored the only goal of the first half for the Blues and it looked as if the game was done and dusted when Grant Anderson scored a double. However, the hosts fought back with Craig Watson and Jonathan Page finding the net to ensure a nervy finish.

3. High-scoring encounters between the two sides have been the norm in recent years. The last 0-0 in Methil came in January 2017 in what was Stevie Farrell’s first game in charge.

4. Man of many clubs, including Stranraer, John Hillcoat celebrates his 52nd birthday today (Friday). He spent 2002/03 with the Blues and his previous clubs include Clyde, Ayr United and Queen of the South.

5. There has been a change of manager at East Fife since the 2-2 draw with Stranraer earlier in the season. Stevie Crawford moved on to Dundee United while Greig McDonald is now at the helm. He scored the winner for East Fife in a 2-1 win against Stranraer on January 2, 2008. Kevin Nicoll scored for the Blues that day and the Stranraer line up was: Black, McKinstry, McLauchlan, Nicoll, Mitchell, Bonar, Mullen, Stewart (Gibson 79), Tade, White (Cashmore 87), McGowan. Not used: Thomas, Cochrane and Ferguson.

There is no ‘pay at the gate’ facility on Saturday – instead, admission is via the East Fife website, phone, or club office on the day.

Prices are as follows:

Viewers outside the UK and Ireland can watch the game via the home club’s monthly subscription streaming service, priced at £20 for 30 days.

McLean is raring to go