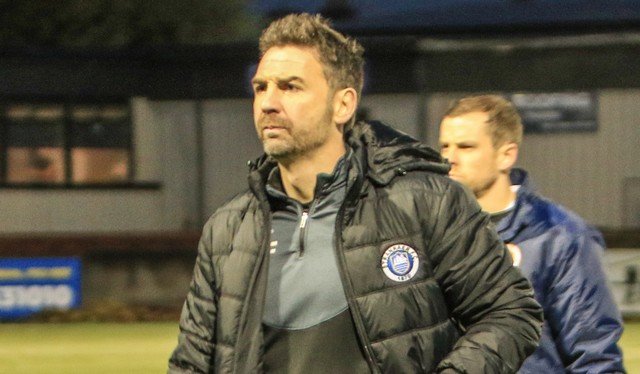 TWO NEW faces could yet be added to Stevie Farrell’s squad as Stranraer gear up for returning to pre-season.

The manager has been busy rebuilding his team after the club dropped from League One to League Two.

However, Farrell is not finished just yet and revealed he wanted to further strengthen the team.

He said: “I will be looking to bring in probably one or two more.

“I still think we need another defender and we will be looking to bring in one.

“We are also in talks with a Premiership club about bringing in a player on loan.

“Last year, we were caught short with injuries and were really restricted.

“We had limited options but for this year, with any ailments, injuries or suspensions, I will have a squad strong enough to deal with that.”

The latest transfer news came earlier this week with the announcement that Andy Stirling had extended his stay with the Blues.

Farrell is a big fan of the former Dumbarton man, who is closing in on 100 starts for Stranraer.

Now, the manager is determined to get the very best out of the midfielder.

He said: “We know what Andy Stirling can do on his day.

“That’s how good he is on his day.

“I think we all know that and it is my job to bring the best out of him and get him playing the way that we know he can.

“If we do, we are going to have a right good player who could possibly still be playing in the Championship.

“We have got to get the best out of him.

“He came in last season and probably was not 100% fit.

“He was struggling with niggling injuries and we probably did not see the best of him and what everybody at Stranraer knows he is capable of.

“With this lockdown and rest that he has had, coming back free of injury and a pre-season under his belt, hopefully we see the very best of him.”

However, while the midfielder was committing his future to the club, it was time for fans to say goodbye to Ryan Stevenson.

The former Jambo only played eight games for Stranraer but the Stair Park faithful firmly took him to their hearts.

Farrell said: “I have been working with him now for six weeks to try to be respectful of his family situation.

“At the same time, we tried to be as patient as we could be with one another to make it happen.

“Ryan wanted to make it happen as much as we did.

“With his family circumstances, his work and with a newborn on the way, he just did not feel it was going to be viable.

“The one thing Ryan said, which I respect him for, is he did not want to come in and give it 75%.