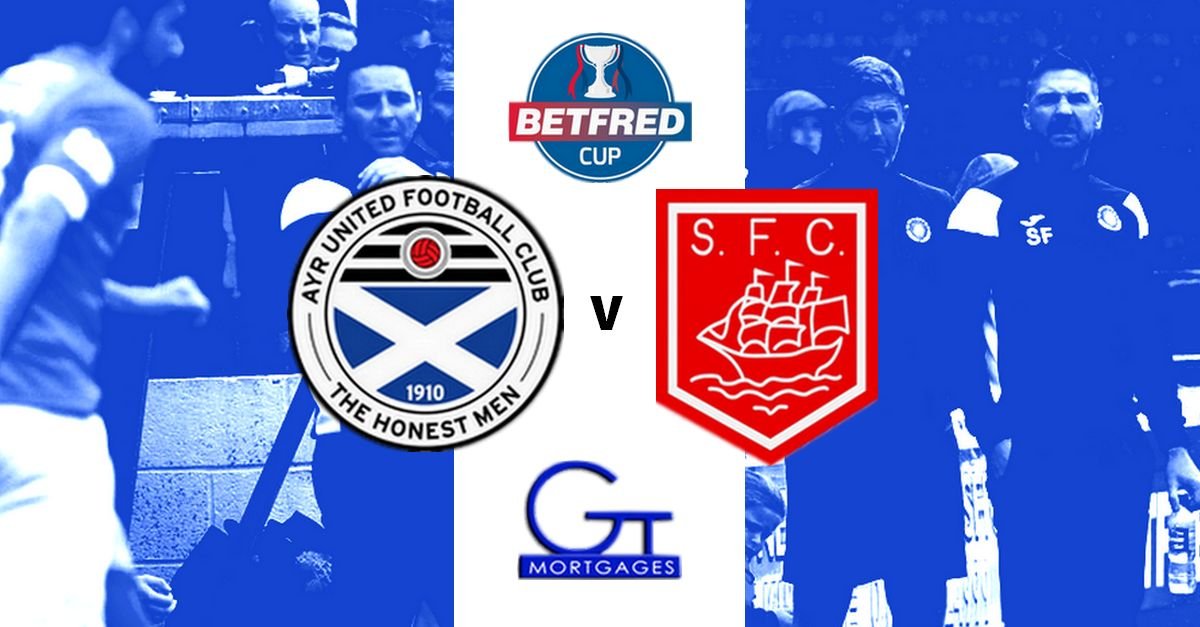 Saturday’s trip to Somerset Park is very straightforward for both Stranraer and Ayr United.

An away win will put the visitors through and a home win will see the hosts progress to the last 16.

The two sides met at the same stage last year and could not be separated over 90 minutes as Adam Cummins cancelled out goals from Michael Moffat and Steven Kelly.

The Blues would emerge victorious after a penalty shootout and the same again would see them through.

Stranraer boss Stevie Farrell was looking forward to the game after defeating Premiership side Hamilton Academical 2-1 on Wednesday night.

He said: “It is winner takes all and it is a great game.

“If somebody had said to both Ayr United and Stranraer that in the last game of the section when you both play each other it is winner takes all, then, both teams would have probably taken that.”

The midweek win made it two victories in less than a week, building on the 2-0 triumph over Cowdenbeath on Saturday.

The manager said “a week is a long time in football” and praised his side’s efforts over the last two games.

On Wednesday, Thomas Orr’s strike was cancelled out by Hakeem Odoffin before substitute Darryl Duffy headed home the winner.

Farrell said: “One of the things I said to them in the dressing room is this team has just come from Ibrox and the plush surroundings of Ibrox on Sunday.

“They are now coming to Stair Park and the pitch is heavy, rain in their face, wind in their face and on the back of an 8-0 defeat.

“We’ve got to go and start the game and get right in their face and let them know they are in for a night of it.

“The players did that and I thought over the piece we deserved to win the game.”

Farrell said: “Jamie only picked up his injury on Tuesday so we are hoping he will be fine for Edinburgh City the following week.

“Cameron is still concerning us a wee bit in terms of the fact it does not seem to be making much progress.

“We will assess him over the weekend and see what needs to be done next week.”

The defensive duo of Burns and Devitt are both missing for personal reasons but could return for the trip to the capital, while McManus and Millar are suspended for tomorrow’s clash.

That means that a number of the Stranraer development squad will swap the South of Scotland Football League for the Betfred Cup.

Farrell said: “It only leaves us with 12 fit players so we are having to dip into the reserves and I don’t like doing that because I don’t like disrupting the South of Scotland team’s preparations at this late a stage either.

“I did apologise to Gary McCutcheon quite profusely that I had to do that but unfortunately we have had to get three or four of the boys coming up tomorrow.”

Stranraer’s squad is expected to be bolstered the following weekend though, with the additions of winger Josh Walker and frontman Matthew Yates.

Both have been named in the squad as trialists in recent weeks but are ineligible for tomorrow’s match.

The manager said: “Both are young players coming from full time clubs.

“Josh was at Kilmarnock through all of his career and was actually a team-mate of Jamie Walker.

A penalty shoot-out triumph saw Stranraer pick up the bonus point at Somerset Park just over 12 months ago.

Michael Moffat opened the scoring early doors before Adam Cummins headed home an equaliser only for Ayr to score again before the break.

Steven Kelly scored a lovely free-kick before Stranraer found the leveller right as the game approached 90 minutes. Cummins was again the man on target as he rose highest to head home.

The match would be decided from 12 yards with Jordan Allan, Jamie Hamill, David Dangana, Cummins and James Hilton finding the net.

Daniel Harvie then missed for the hosts before Ryan Thomson fired home the winner.

Stranraer have already contested a game with Barry Cook in the middle this season.

Just last month, the Blues were at Galabank where they picked up a 1-1 draw in their first away league game of the campaign. Grant Gallagher was shown a straight red card on that occasion before Andy Stirling put the ten men in front. Owen Moxon would equalise for the hosts just before half time and that was the way it stayed.

It was July 2019 when Mr Cook stepped into the middle of a match at Somerset Park. Falkirk were the visitors to Ayr and again the scores were 1-1 at half time. Luke McCowan had scored for the home team before Declan McManus levelled shortly before the break. Former Stranraer man Mark Durnan was sent off early in the second half for the visitors before Andy Geggan grabbed a winner 15 minutes from time for Ayr.

We will bring you extended highlights, interviews and a match report from Saturday’s cup tie at Somerset Park.

You can watch live video coverage via Ayr United’s streaming service, priced at £10.

Hope ahead for Faz