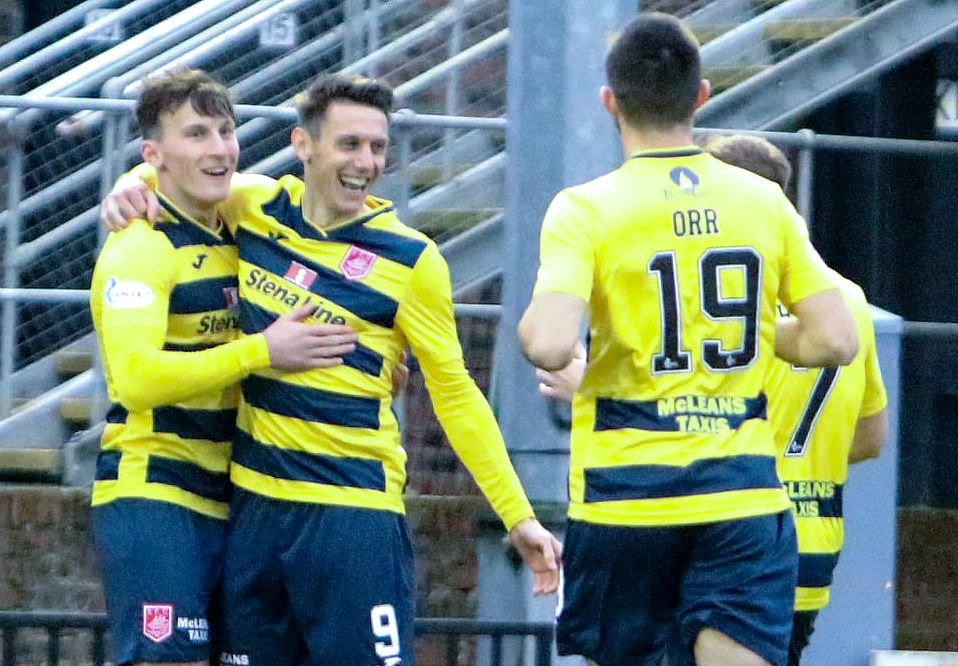 Injury-hit Stranraer came within a whisker of Betfred Cup progression as Ayr edged a “winner takes all” showdown at Somerset Park.

Darryl Duffy’s strike had the Blues in front within the first minute of the game, before the striker missed an opportunity to double his tally from the spot.

Luke McCowan’s equaliser stood for the home side despite claims of offside, and Thomas Orr was the unfortunate penalty taker in the shootout for Stranraer as Ayr secured the bonus point.

Stevie Farrell faced an injury crisis once again, with just 11 fit outfield players available from the first team, backed up by three recruits from the Blues’ South of Scotland League side.

More bad news was to follow, as Andy Stirling pulled up in the warmup.

However, it was his replacement – Wednesday night’s goal hero Duffy – who put the Blues ahead in the opening minute.

Victoria picked the ball up 30 yards up, dodged a tackle and scooped a pass into the box for Orr, who teed up Duffy to roll the ball into the bottom corner.

The woodwork would come to the rescue of both teams within a matter of minutes.

Then, the Blues were awarded a penalty after Ruari Paton went down under close scrutiny from Michael Hewitt.

The celebrations were short lived, however, as Duffy could only rattle the crossbar.

Ayr had plenty of possession in the first half, but rarely threatened the Stranraer goal.

On the one occasion that the home side managed to get an effort on target, via the head of Aberdeen loanee Bruce Anderson, Blues goalkeeper Greg Fleming was able to tip the ball over the bar.

The second half began in the same way as the first – with an early goal.

There were loud appeals from the Stranraer defence for offside as veteran striker Michael Moffat lifted a ball into the box for Luke McCowan to round the keeper and slot home, but the goal was allowed to stand.

With their lead evaporating within two minutes of the restart, Stranraer immediately looked for a response.

Paton brought a save from Aston Villa loanee Viljami Sinisalo, who was then tested by a fizzing strike from James Hilton.

Fleming had to be alert to see off Grant Gallagher’s short back pass at the feet of Ayr striker Anderson, with McCowan’s resulting effort from distance cleared off the line by Scott Robertson.

Both sides had big chances to clinch victory in the closing stages.

At the other end, Paton strode onto a ball from Hilton and slipped in a pass for Orr, but he could only fire wide.

But the scores would remain level after 90 minutes.

And, in the resulting penalty shootout, Orr was the unlucky taker to miss the target in sudden death.

Despite missing out on a place in the last 16, Stevie Farrell was heartened by his side’s performance.

Next up for Stranraer is a trip to Edinburgh City on league business.