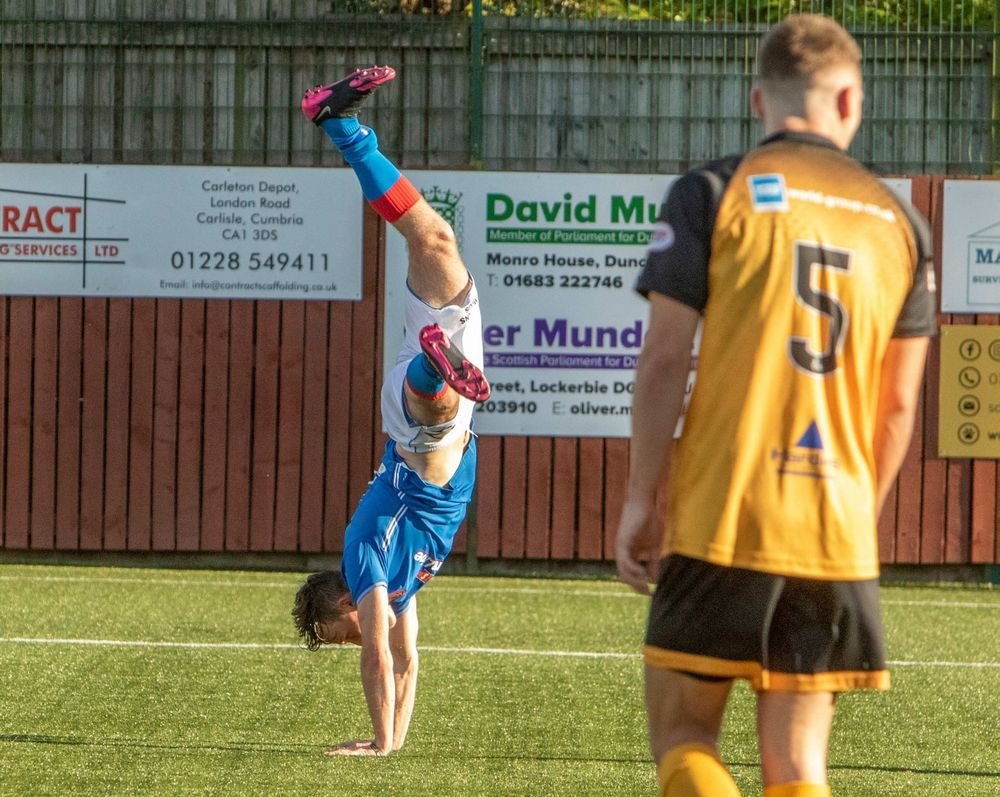 Stranraer kicked off their Betfred Cup campaign with a shootout victory over League 2 rivals Annan.

Ruari Paton’s first half strike for the Blues was cancelled out by Owen Moxon’s headed equaliser, before the visitors prevailed on penalties at Galabank.

Grant Gallagher wore the captain’s armband on his first appearance since returning in 2019, having sat out last season through injury.

The visitors started brightly, with the lively Andy Stirling lifting a shot over from the edge of the box.

Burns’ delivery for the near post was then met by Paton, whose bullet header sailed just wide of the mark.

Stirling had another chance to open the scoring, meeting a bouncing ball with a well-timed volley, which brought a solid save from home keeper Alex Mitchell.

And Mitchell had more work to do just after the half hour mark, leaping to turn a deflected Burns strike wide.

But the Blues would finally break the deadlock with eight minutes remaining of the first half.

Gallagher’s lofted pass from deep was met by Stirling, who nodded the ball into the path of Duffy.

A few deft touches from the experienced frontman created space, allowing him to play an inviting ball across goal, which Joao Victoria flicked into the path of Paton.

The Irishman made no mistake, slotting into the bottom corner before celebrating in acrobatic style, to the delight of his team mates.

Within a minute, Paton was through again, as Stirling’s quick pace and well-timed through ball beat the Annan defence.

This time the striker opted to take the ball past the keeper, but his shot rebounded agonisingly off the foot of the post.

Former Blues man Mark Docherty dragged a shot wide for the hosts, before Stranraer were handed the final chance of the first half as the Annan keeper collected a back pass from his defender.

An indirect free kick was awarded, and Stirling teeed up Duffy, whose shot was blocked by Matty Douglas on the goal line.

No doubt disappointed by their first half showing, Annan were much brighter in the second half, and could have levelled the scoring when Nathan Flanagan strode onto a through ball after a well-worked passing move.

The former Raith Rovers midfielder managed to find his way past Fleming, but found his shot well blocked by Stranraer new boy Devitt.

However, the hosts would get the goal their play deserved within ten minutes of the restart.

Seeking an instant reply, Stranraer defender Sean Burns lifted a long ball into the path of Duffy, whose quick feet created an opening for Stirling.

The winger played in substitute Cameron Elliott, but Mitchell managed to push his shot away.

The forward raced onto Scott Robertson’s delivery from the half way line, and managed to shrug off the attention of Lewis Hunter before rattling the post, with home goalkeeper Mitchell thankful to collect the ball on the rebound.

Annan could have scored the winner themselves, only for Iain Anderson to miscue his shot from 6 yards after a quick break from former Blues striker Max Wright.

With the score tied after 90 minutes, Annan took an early lead in the penalty shootout after Orr’s tame first attempt was saved by Mitchell.

But after Wright fired well over the bar for the home side, Fleming made the all-important save for Stranraer, denying Aaron Splaine in sudden death.

And, Gallagher rounded off his return by slotting home the winning spot kick.

Next up for the Blues is a Tuesday night home tie with fellow League Two outfit Albion Rovers, which you can watch exclusively on Stranraer FC LIVE.