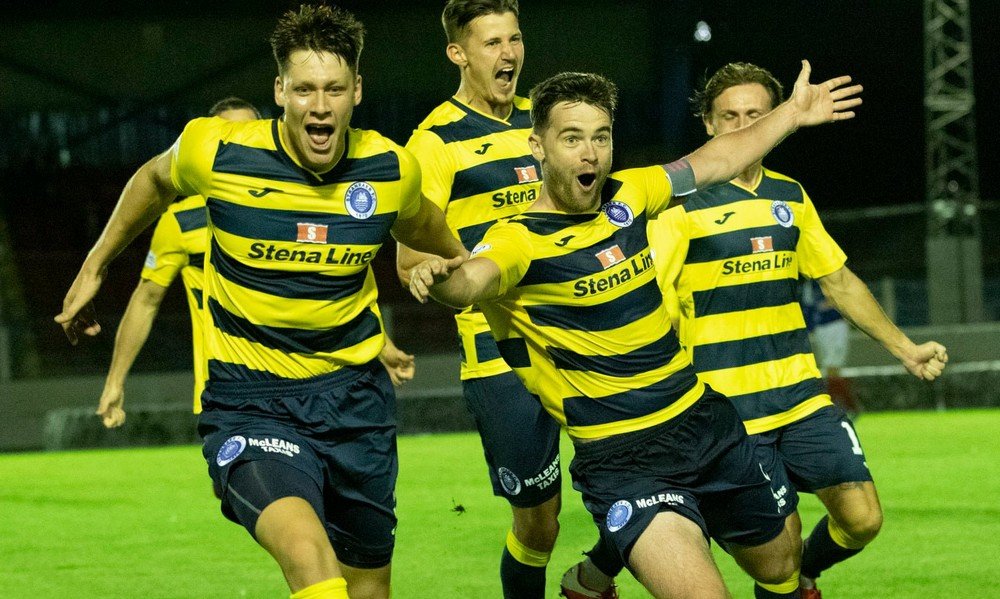 Covid had taken its toll in the ‘Beath squad 10 days ago, but they were back to apparent full strength for this one, while Stranraer welcomed back Matty Yates, Josh Walker and Emile N’Goy from the depleted squad that took a point from Forfar on Saturday.

However, N’Goy for the injured Darryl Duffy was the only change to the starting lineup.

The Blues made a bright start, Paul Woods firing just over from 20 yards after two minutes, but the game, while going from end to end, created no goalscoring chances until Robbie Buchanan broke clear and made a bee-line for the Stranraer goal, only to be denied an opportunity by a great chase back and tackle from young Ross Smith.

It was 27 minutes before either side created another chance, Ayrton Sonkur doing well to get his head to a Smith free kick, but with his back to goal, he could only head wide.

Another Sonkur header from a free kick sailed past the home goal, but the visitors were fortunate not to concede on 32 minutes, when a good old fashioned stramash developed in the six yard box before it was eventually cleared.

As half time approached, Irving got clear, but hurried his shot and it sailed harmlessly over.

The second half started without any substitutions, but within four minutes, the Blues were somewhat undeservedly behind. Another cross into the box found home full back Craig Thomson at the far post, and his downward header was swept home from close range by that seasoned predator Liam Buchanan.

Within a minute, the boss had replaced N’Goy with Rennie – Emile picked up a knock in the first half – and the Blues set about getting back on terms.

Ross Smith showed great composure on the edge of the  box to drag the ball into space for a shot, and was unlucky to see it shave the outside of the post with Gill beaten.

Joe Moore, Yates and Walker came on after an hour for Paul Woods, and the two Rosses – Smith and Irving.

Rennie pounced on a miskick in the ‘Beath defence but fired over, and the longer the game went on, the more the home side looked to be growing in confidence.

But suddenly, on 83 minutes and from nowhere apparently, the Blues, who had continued to try and play football throughout, got it spot on. Burns released Moore down the left, and his penetrating run and cross found Rennie running in to joyfully slam home the equaliser, with Gill stranded by the cross.

Suddenly a side that looked as if it was flagging was rejuvenated, and when Jack Baker superbly turned over a deflected shot, Cowdenbeath had shot their last bolt.

The Blues sensed a chance to take all three points, and when another visiting attack was only cleared out to the right corner of the box, Broque Watson’s headed flick set up Gallagher, who fired in a shot that sped like a tracer bullet across Gill to nestle in the far corner of the net.

It was an incredible transformation, but one which, on the balance of play, the Blues just deserved. They refused to give up and lie down, and even late on, when many teams would have settled for a point, they always looked as if they were hungry for all three, and that hunger was satisfied.