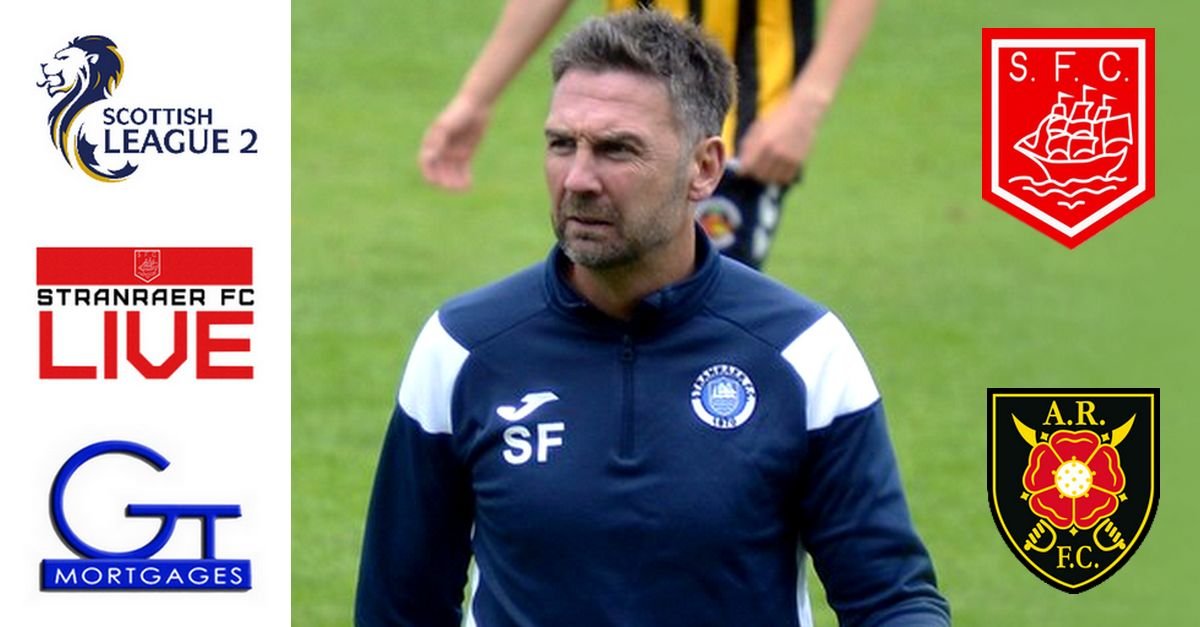 Stevie Farrell is ready to welcome fans back to Stair Park with open arms, more than nine months since spectators last stepped foot in the ground.

Fans will finally get the chance to see the new look Stranraer squad in the flesh for the first time this season when Albion Rovers visit tomorrow (Saturday).

Farrell’s men have enjoyed a decent start to the campaign and the manager was hopeful the return of spectators could give them a boost.

“First and foremost, it’s great for the fans because we all know what a Saturday and even a Friday night are like with that interaction that comes from football.

“That interaction is just brilliant.

“We all watch all levels of football on television or through subscription channels like Stranraer FC LIVE but nothing beats the atmosphere of being at a game, the feeling of being close to it and watching everything that comes close with the game.

“It has been a long time coming and there have been a lot of frustrations and road blocks but tomorrow is finally an opportunity to get back to some kind of football normality.”

Josh Walker is the only man definitely out for tomorrow’s contest, with Grant Gallagher rated doubtful due to a groin problem.

The captain was injured during last week’s 2-2 draw with Stenhousemuir, where the Blues had led 2-0.

It was a disappointed away dressing room at Ochilview and Farrell stressed he was pleased to see the players hurting after only taking a point.

He said: “We did have a frustrated dressing room and that is a good thing.

“I know we are on a fantastic run and enjoying it as a group and individually but it just shows the standards the players have set themselves to not be happy with a point away from home.”

Tomorrow’s visitors come into the contest boosted by a 3-1 victory over Elgin City last time out.

A Matthew Aitken double inspired the Coatbridge men to just their second three points of the season.

Albion Rovers, managed by former Blues boss Brian Reid, also tasted victory in a penalty shoot-out in Stranraer at the beginning of the season.

Farrell said: “They will be buoyed by last week and believe they can come down after the Betfred result and get a result.

“We are in a good place, are a decent side and going about our business quietly but efficiently.

“If we continue that tomorrow, we give ourselves a good chance.”

Fans of both teams will not have to cast their minds back too far for the last meeting between the two sides.

In the middle of October, Stranraer welcomed Brian Reid’s Albion Rovers side to Stair Park, with Ayrton Sonkur opening the scoring.

However, the game would be turned on its head as Sam Jamieson and then Gregor Fotheringham put the Coatbridge side in front just before the half time interval.

Ruari Paton pulled Stranraer level and the game would be decided by a lengthy penalty shoot-out. In the end, Connor McManus was the unlucky man as his penalty clipped the bar and Albion Rovers won 15-14.

Calum Scott took charge of the last meeting between Stranraer and Albion Rovers. A penalty shoot-out will not be needed to determine a winner on this occasion though.

The man in the middle has taken charge of three other games in League Two this season. The most recent came when Queen’s Park ventured to Cowdenbeath. Peter Grant scored in the first half with Grant Gillespie and Simon Murray sealing the victory after the break.

We are delighted to be able to welcome a limited number of home fans back into Stair Park this Saturday.

Tickets must be purchased (or collected by season ticket holders) prior to the game, and a limited number are still available at the Fitba Bar from 11am on Saturday morning.

Attendance is restricted to fans who reside in Dumfries and Galloway with no travel from higher tier areas permitted, and supporters are reminded to strictly follow social distancing measures at the ground.

If you have symptoms of COVID-19 or are self-isolating, please stay at home and watch the game via Stranraer FC LIVE.

Wherever you are on Saturday, we hope you enjoy the game.