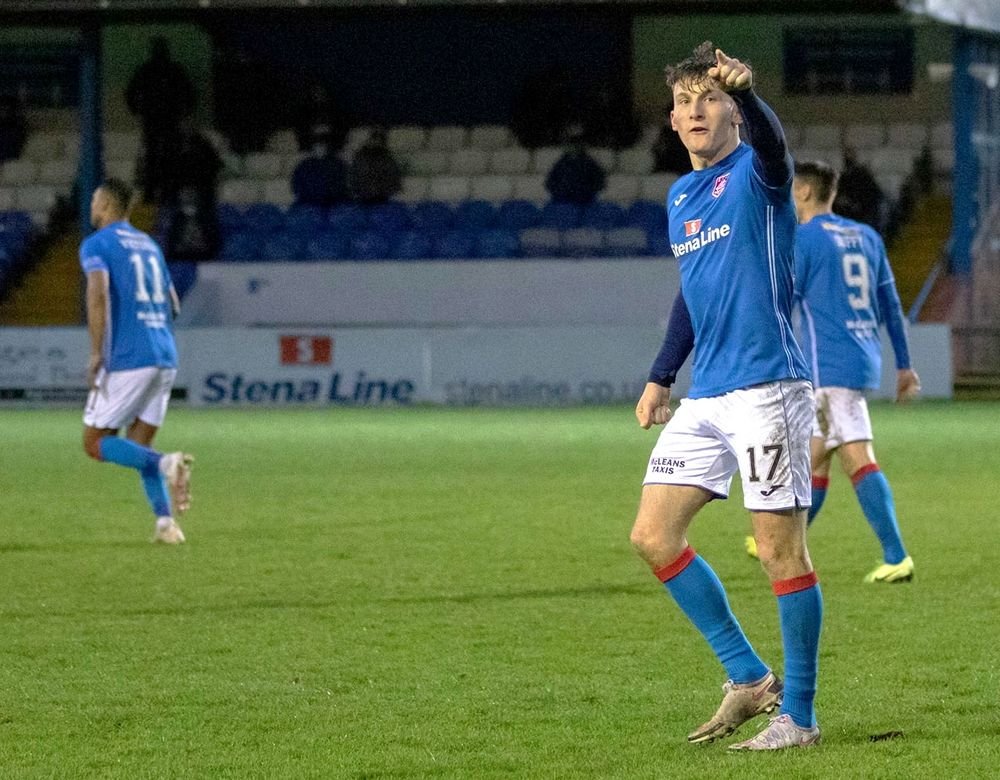 Goalless at the break, the Blues scored four unanswered second half goals to extend their unbeaten run to eight games.

The manager was forced into one change from the side that had drawn at Stenhousemuir seven days earlier.

Grant Gallagher missed out through injury with club captain Jamie Hamill slotting back in at right back.

The first half gave little indication of what was to come, with Stranraer edging possession but neither goalkeeper having a lot to do.

Chances were few and far between with Darryl Duffy unable to get on the end of Ruari Paton’s header and Greg Fleming making a routine stop from Aron Lynas at the other end.

The best opportunity of the first half would fall to the hosts but it would not be until after the half hour mark.

Duffy was again involved, this time playing the ball wide to Joao Victoria.

The former Albion Rovers man had an engaging battle with Lynas all afternoon and on this occasion got a yard of space but drilled his shot against the legs of Chris Henry in the Albion Rovers goal.

Goalless at the half time interval, Albion Rovers were blown away within 17 minutes of the restart.

Ruari Paton was the man to break the deadlock with just two minutes of the second half played.

His corner was only half cleared and Connor McManus played it back out to Paton on the left.

The striker cut inside and fired through a crowd of players to make the score 1-0.

Little over five minutes later and it was Thomas Orr’s turn to get on the scoresheet.

The former Queen’s Park man cut in from the right and went it alone before beating Henry from the edge of the box.

Just after the hour mark and any lingering fears of throwing away a two-goal lead like the previous week were put to bed.

The goal was arguably the pick of the bunch as McManus, who excelled in midfield alongside Kieran Millar, played in a teasing cross and Duffy nipped in to flick it beyond Henry.

Fleming had been a virtual spectator in the second half but he was called into action with just under 20 minutes left.

McManus was penalised for a trip in the box with Albion Rovers awarded a penalty at the same end as they won a lengthy penalty shoot-out at earlier in the season.

This time, Lewis Baker was denied by Stranraer’s goalkeeper and the day went from bad to worse for the Coatbridge men as Stranraer made it four with nine minutes left.

Andy Stirling was the provider and Cameron Elliott celebrated his return to competitive action with a close range finish.

It could even have been five in stoppage time as Elliott played a brilliant ball through to fellow sub Matty Yates but Henry did well to gather his low shot at the second attempt.

League business is finished for 2020 with Stranraer now turning their attention to a Boxing Day Scottish Cup contest with Spartans.