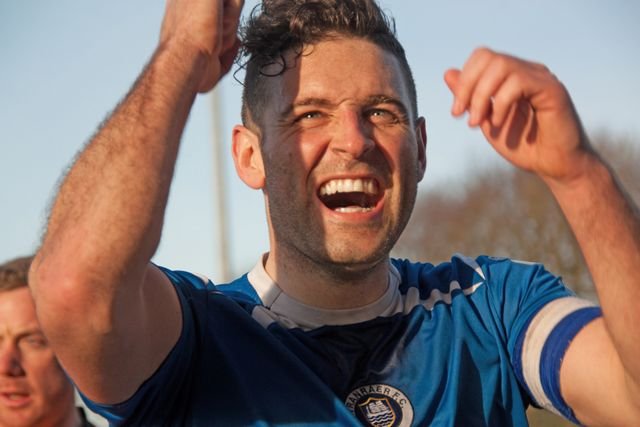 THREE managers, two spells as a player and now part of the coaching team – Frank McKeown is firmly at home at Stair Park.

Little did he know when he signed for Stranraer back in 2011 that it would be the start of an ever-growing connection with the club.

More than 190 games as a player and now gearing up for his second season as part of the coaching team, a strong bond has been cemented between the former defender, the fans and the committee at the club.

Friendships have been formed along the way and McKeown said they had to continue to utilise that welcoming attitude if they were to continue to be successful as a club.

He said: “Guys like Iain Dougan, Shaun Niven, Robert Rice, Stewart Marshall, Bill Paton, David Jenkins, Alex Thomson, Hilde Law – all these people I have name-checked, these people make Stranraer what it is.

“Again, I see some comments and the tough time these people get but the things these guys do behind the scenes is unbelievable.

“Stepping into coaching and the management team now, it is night and day that these people are working behind the scenes.

“Of course, they are not going to get it right all the time but you cannot fault their passion and their drive and willingness to do things way over and above what they should be doing.

“These guys make Stranraer what it is.

“When you arrive as a player, the first thing you get is that welcome.

“That goes a long, long way because of where Stranraer is in terms of logistically, in terms of travelling and things like that, even more so now with resources and the budgets we are dealing with, Stranraer has to be that club.

“They just cannot be a club where they are not welcoming.

“I don’t even know if these guys realise what they do but it is something that needs to continue and I know it will because they are just good people.

“There is no bitterness in the club, there are no big hitters or grandstanders trying to take the stage but just everybody trying to do their little bit.

“When you walk in as a player that is the first thing you get, that welcome and you are part of Stranraer and that is what I have had since day one.”

McKeown’s connection with the club actually started before he put pen to paper on any contract.

He lined up alongside future Blues boss Stevie Aitken at Arthurlie.

Sean Winter and Craig Malcolm would follow Aitken, who would become assistant manager to Keith Knox, from Dunterlie Park to Stair Park in 2010.

Twelve months would pass before McKeown took the plunge and made the move as well.

However, he could have had a debut to forget as Greenock Morton thumped Stranraer 8-0 in an opening day Scottish League Challenge Cup tie.

He said: “I think Arthurlie had won the West of Scotland Cup and my season did not finish until the first or second week in June.

“At the time, the manager, Keith Knox, agreed that I would get a couple of weeks off because if I had just continued to do what I was doing I would have been straight into games.

“I think I did a pre-season in a couple of weeks and then went away on holiday.

“It was just one of those things where I had already booked it, I had already planned it and the deal was agreed late in the day.

“Of course, I was keeping an eye on the score and when I saw it I thought it probably would have been 10-0 if I had been playing!”

Instead, McKeown would slot into the heart of the defence the following week in a 2-1 defeat to Queen of the South and would quickly become a key figure in the defensive line under Knox.

“To be fair, I did not know much about him until I signed and then looked at his career and he had a great career, which spanned a lot of years.

“He was a well respected player so when he moved into management he took that passion and that drive with him.

“It was a dressing room I enjoyed at the time.

“I knew a few boys but he had his methods that were different from every other manager and every manager seems to have different wee things.

“His team talks were always very passionate and unfortunately results probably did not go the way that they should have gone for him.

“An absolute gentleman and a lovely guy but unfortunately the results on the pitch just did not seem to go the way we wanted at the time.”

Aitken would then takeover the Stair Park hot seat and guide Stranraer to League One safety before the club would go on to punch above its weight and challenge for the play-offs at the top of the table.

Unfortunately, those play-offs, like so many for the club, ended in disappointment.

McKeown said: “The only real regret I’ve got in my first spell is that we did not get our hands on some silverware.

“When I look back, I do think we punched well above our weight and we did better than expected.

“When you look at the clubs we had in the league some times, we always had a really good outfit.

“We always had that.

“Even Alloa at the time when we were in League Two and they were absolutely flying.

“They had Stevie May, who scored something like 35 goals that year, and Scott Bain at the other end.

“That just shows you what sort of team Alloa had at the time and where those guys have moved onto.

“If we had a Stevie May who scored 35 goals we might have won the league that year and maybe even the following year.

“They are lows, real lows, because I think that team deserved it at the time.

“Even the Challenge Cup semi-final, we got beat on penalties by a really good Livingston team and we were the better team.

“I am sure Jamie Longworth was through very late on and just missed.

“Again, we were the better team but that was the low.

“In terms of the highs, just being involved in a team like that, just being an underdog constantly.

“I don’t think anybody thought we were going to do the things we did.

“The unbeaten run we went on was just phenomenal and I loved that.

“Going into the dressing room and just knowing we were going to win or, if we are going to get beat or just a draw, then, the opposition are going to have to be really up for it.

“They are going to have to be better than us because we are ready and that was a really good feeling.

“I scored the winner that day but in the first half my man had nearly scored twice.

“I think he hit the post and then Mitch [David Mitchell] had made a good save.

“I went in at half time thinking I had got away with one and I cannot remember if it was Stevie Aitken or Stevie Farrell but they were saying ‘don’t let that happen again’ and I’ve gone out in the second half and scored the winner!”

A move to Greenock Morton came as Aitken left the club for Dumbarton in 2015 but McKeown’s time at Cappielow was ruined by injury and he left after a year.

Without a club, he visited Stair Park and Somerset Park as Stranraer attempted to gain promotion to the Championship through the play-offs.

It was two trips which effectively convinced him to pull on the blue and white shirt once again.

McKeown said: “I drove myself down to Stranraer to watch the first leg against Livingston on the Wednesday night.

“I remember speaking to Alex Thomson about it on the way down and Iain Dougan as I was heading down.

“It was my first time back at Stranraer obviously in a year and I met up with a lot of guys when I was there.

“I watched the game and it was fantastic, it was brilliant, and I could not make the second leg.

“Then, I watched the second leg of the final at Somerset.

“I was in the crowd with some of the fans and they were asking me if I was coming back to the club.

“It was really nice that day and for the fans to say that.

“Unfortunately, we got beat on penalties and it was more heartache.

“I was devastated but at that point I was just there as a fan.”

The defender freely admits his second spell at the club, this time under Brian Reid, did not work out as planned.

A bid to reach 200 games for the club saw him fall eight short as he moved on to Alloa Athletic, a club who had been keen to sign him during the previous summer.

Twenty-five appearances for the Wasps eventually saw McKeown hang up his boots due to a calf injury suffered while at Stranraer.

However, a call from Stevie Farrell last summer saw that connection with the club brought back to life.

Now, he has been named as the latest member in the Team of the Decade – joining former team-mates David Mitchell, Scott Robertson, Steven Bell and Liam Dick in the team.

McKeown said: “It is an honour.

“It is amazing and something that I am really proud of.

“You think of the players that could have been in there and there are a lot of good players who have gone on to have good careers.

“Mitch, Robbo, Belly, Dicko and myself – that’s a good back five to get us going.

“I’m just proud and it is really nice.

“I have always had an affiliation with the supporters at Stranraer and, obviously, I appreciate everybody voting.

“It is just a nice feeling to feel that the feeling I have got for Stranraer is mutual and reciprocated from the fans.

“They appreciate what I did in my time playing at the club and appreciate my performances.

“I always gave my all.

“I was never the most talented footballer so I had to use my determination, my desire and things like that.

“So, to do that and end up in the team of the decade for a team, when you think about all the players that have played in ten years at a football club, to get an honour for something like that, it goes into the scrapbook.”