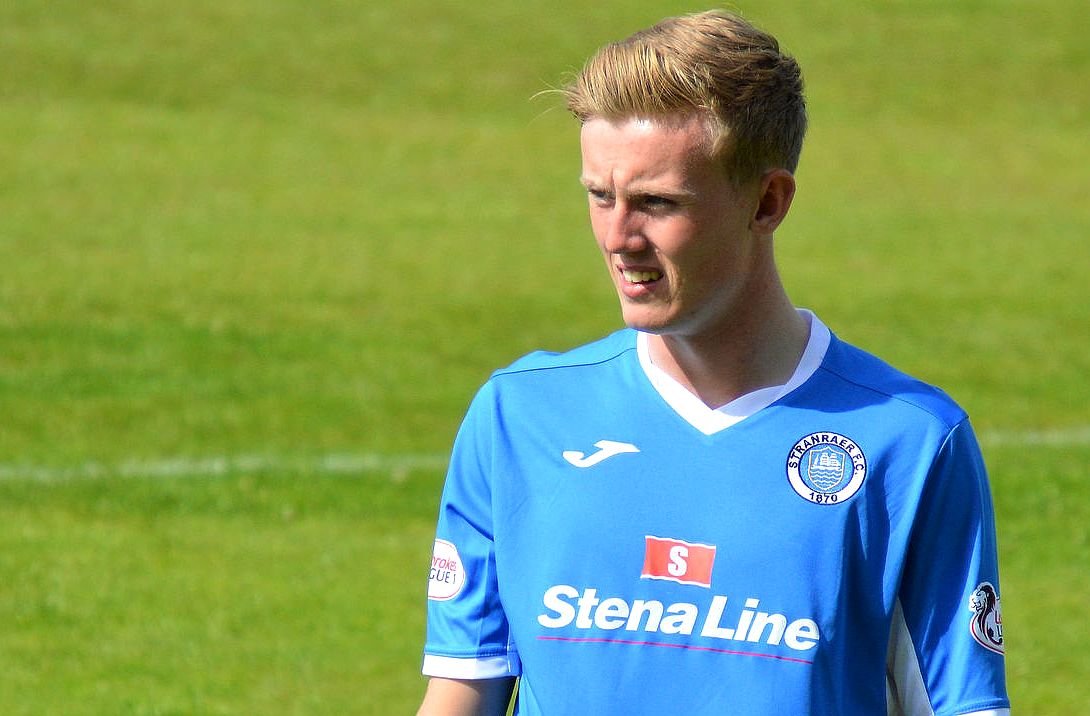 STARTING with Stranraer has made Kyle Turner grateful for what he has at Dunfermline Athletic.

The midfielder was the eighth player to be named in Stranraer’s Team of the Decade after winning the central midfield vote.

It has been quite the journey for Turner, who is still only 22 years old.

When he joined the Blues, initially for the under-20s squad, he was barely old enough to drive.

However, Brian Reid, the first team manager, spotted his potential and quickly promoted him to the senior squad and gave him his chance – the rest is history.

Turner said: “I was playing at Glentyan Thistle, it is a boys’ club.

“One of the boys, I think it was Nathan Brown, who was the under-20s goalkeeper at Stranraer, asked me if I wanted to come along to the under-20s.

“It was Matt Maley who was in at the under-20s and said I could come along and train so that they could have a look at me.

“I went there, trained, did well and then they signed me for the under-20s.

“Then, Brian Reid came in and came and watched a reserve game.

“He asked me a couple of weeks later to sign with the first team.”

The new signing had barely a dozen games under his belt with the under-20s before he received the call to link up with the first team.

Quickly, he made his debut against Stenhousemuir on September 12, 2015, and just seven days later he was making his first start against Albion Rovers.

Both games ended in 1-0 defeats but Turner had started to climb the footballing ladder.

He said: “I don’t remember much about the Stenhousemuir game, other than coming on.

“Apart from that I don’t really remember much but I remember my first start against Albion Rovers.

“I remember Brian Reid telling me on the Thursday that I was going to be starting on the Saturday.

“I think we played well that day and I think they scored against the run of play.

“It finished 1-0 and obviously it was disappointing because it was the first game I started and I got beat.

“I had enough time to process that I was going to be starting.

“Obviously, I was young then, I think I was 16 or 17, and getting thrown in against grown guys.

“I had never played at that level so I was nervous but I was excited.”

The former St Mirren and Partick Thistle youngster was quick to praise the management team of Reid, Lee Mair and Chris Aitken for giving him his chance.

Their faith in him saw him make 20 appearances in that first season, with perhaps the most memorable coming in April against Airdrie.

Turner said: “I remember my first goal at Stair Park against Airdrie.

“I was in the middle of the box and I think Liam Dick passed the ball to me.

“I took a touch with my right foot and hit it with my left.

“It is probably the sweetest I have ever hit the ball with my left foot and it went into the top corner.

“I was itching to get a goal.

“Maybe before that I had a couple of chances to score but I never took them.

“That day it came and I was just really happy that I had eventually got off the mark.”

It would have been easy for Turner to rest on his laurels after that first season.

However, despite his young age, he quickly cemented his place in the team and built on that first campaign.

The following year, he made 37 appearances and found the net on four occasions.

He said: “You need to keep working hard.

“You get into first team football with grown men and some of them have played in the league for years.

“Obviously, they are trying to help you out and get you into the team.

“When they think the time is right, they put you in.

“That is what Brian Reid, Lee Mair and Chris Aitken did.

“I was grateful for that.”

Following Reid’s departure, Stevie Farrell took charge of the Blues and Turner found himself on the bench for the first game of the new manager’s reign.

The Blues, who were sitting bottom of the table, drew 0-0 away to East Fife, with Turner, Evan Maley, Giuliano Morena and David Wilson among the unused substitutes, alongside Max Currie.

Stranraer’s journey to staying up received a boost the following week when they won 3-0 against Albion Rovers, with Turner replacing Michael Donald for the final 20 minutes.

Turner would start three games between then and the end of the season as he won over the new boss and would go on to become vice-captain behind Jamie Hamill.

In total, Turner would play 138 games for the Blues, finding the net on 19 occasions, including eight in his final season, with his last kickstarting a 3-2 win away to Raith Rovers having trailed 2-0.

It had felt inevitable for a couple of seasons that it was only a matter of time before Turner got the chance to make the move to full time football.

It finally came with a chance to go to Dunfermline Athletic last summer.

He added: “In part-time football, you are having to work as well and you have a job and then have to go train at night.

“Full-time, it is completely different.

“That is your number one job and that is what you are doing every day.

“It just made me realise how hard you need to work to get from part time to full time.

“When you get there you need to embrace it and go and show what you do.

“I’m very grateful for everything.

“Stranraer were great with me when I was down there – all the committee, everybody, were all great, genuine people.

“They give everything to the club and I was grateful for that.

“I had a great four years there.

“I still speak to some of the boys that I played with a couple of years ago.

“All the committee guys would do everything for you and it is a great wee run club.

“Obviously, they had their struggles in the last couple of years that I was there but everybody just got on with it and worked together.”

Almost inevitably, Turner’s time away from Stair Park would be brief as his new and former clubs were paired together in the Scottish Cup in November last year.

James Hilton’s penalty would be the difference on that occasion as Stranraer picked up the win and secured a cup tie with Rangers.

Turner said: “It was not a good result for us that day.

“Stranraer played well and deserved their result and I have no qualms about it.

“I think I was sitting watching the draw and said to my mum that I bet Dunfermline get Stranraer.

“We were one of the first draws.

“It was one of the first ties out of the hat and Stranraer came out and I thought ‘it will be Dunfermline’.

“We ended up getting them.

“I was happy and I was excited about it because I got to go back there that quickly.

“The result was not what we wanted though.

“I had been used to for so long being with Stranraer, so it was strange being in the away changing room.

“I think that was the first time I had ever been in there.