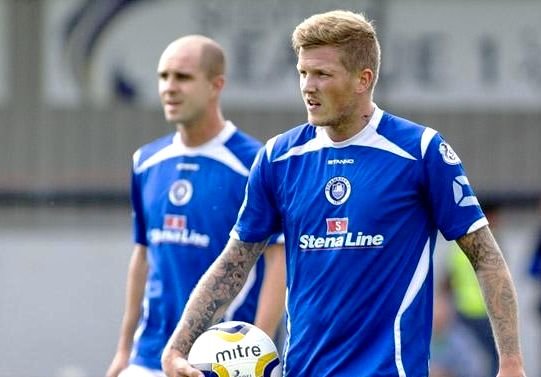 TWENTY-FIVE goals from the left of midfield in 98 games does not really tell the full story for Willie Gibson’s time at Stranraer.

The midfielder became a firm fans’ favourite during his two spells at Stair Park, partly for his goal tally, many of which were from distance, and also for his workrate and ability to hold onto the ball.

It was no surprise when he was named as the seventh player in Stranraer’s Team of the Decade.

The relationship between Gibson and the fans was far from one-sided though, with the man who wore number 33 quick to praise the Stair Park faithful.

He said: “Coming off the pitch and going out to your car after the game and talking just on a normal day to day level with the fans was great.

“They would ask how you were, how the family were and things like that.

“You don’t get that often.

“I think if you ask anyone that has been at Stranraer they would say the same thing.

“Cammy Belford, if you spoke to him he would tell you how they made him and his family feel welcome.

“How they went out of their way to make them feel good and it is just those little things.”

Having played for Stranraer’s rivals Queen of the South, it would have been understandable if Gibson thought he would have to work twice as hard to win over the fans.

In total, he made more than 125 appearances for the Palmerston side, including a 4-1 thumping of the Blues back in 2012.

He said: “When I first joined Stranraer, I did not really know what to expect.

“Being a Dumfries boy, I was not sure quite the reception I would get because previous to joining Stranraer I had a few rough games and things like that when we beat them 4-1 at Palmerston in 2012 when Queens went on to win the Ramsdens Cup and the league that year.

“A lad from Stranraer actually broke my ankle so I did not really have fond memories of playing against Stranraer.

“With all that in mind, I was not sure what to expect but I think just I let my feet do the talking and my performances are the main reason I was liked so much by the fans.

“My performances and dedication, workrate, but then overall it was people behind the scenes that made it special for me.

“They made my family feel welcome, my family were at every game, my kids were always there and they wanted for nothing.

“A thing like Team of the Decade, having had two spells at Stranraer but still only two and a half seasons, to be recognised like this is massive.”

It was actually through Bell that Gibson first got his move to Stranraer.

The two men had played alongside each other at Dunfermline and when Gibson found himself looking for a new club it was Bell who helped set the wheels in motion.

Gibson said: “I was at Celtic Nation and I was actually on holiday when I got a phone call from Willie McStay to say that the owner had pulled out.

“Although I had signed a contract, I would be as well getting back and speaking to him as quickly as possible to see what was happening.

“Then, obviously, it was quite late on when I realised with the owner pulling out that I would need to find something else.

“My good friend Gavin Skelton was at Workington at the time as the assistant manager and he said to me to come along, you’ll do a great job for us, play a couple of games, keep your fitness up and I was doing that.

“Stevie Bell phoned me to ask what I was doing.

“It was quite quick after that.

“I was only ever going to be at Workington short term to keep fit and Gavin knew that.

“As soon as Stranraer had said they would take me, it was all about international clearance.

“I remember the day, driving for my first game for Stranraer against Dunfermline, in which we got beat 2-1 at home.

“It was not until pre-match and we were eating at the hotel that my clearance came through.

“Obviously, I was registered at Workington and I needed to get international clearance because I was now playing in Scotland.”

Gibson was in impressive form in his first spell with the Blues but there is an old saying in football that you should never go back.

However, already two, not including Gibson, of the Stranraer Team of the Decade have impressed the fans over two spells with the Blues.

Gibson, who is now in charge of Queen of the South’s reserves team, revealed he had no doubts whatsoever about coming back to Stair Park having followed Stevie Aitken and Stevie Farrell to Dumbarton in 2015.

He said: “I’ve never really seen it as ‘never go back’.

“It all depends on the circumstances – if you leave on bad terms, would you go back? Probably not.

“If you did not have a successful spell the first time? Then, probably not.

“If you did not enjoy it? Then, probably not.

“But everything from when I rejoined Queen of the South after my first spell – I loved it.

“It was the same with Stranraer.

“My first spell, I loved it, why not? I gave it another go and I loved it again.

“Obviously, we all know Stranraer had their own problems, financially, and that was the reason I left.

“I spoke to Stevie Farrell and knew what was happening was a good bit short of what I was on and I would have to take a pay cut.

“I made the decision financially, and personally for my family, to move on again.

“If Stranraer did not hit that little bit of financial difficulty, would I have stayed? Yes.”

Gibson swapped Stranraer for Peterhead, another club he was quick to praise in terms of their friendliness and welcome, before having a short spell at Stenhousemuir last season.

Since then, he has taken on a management role with his boyhood club but revealed he had no intention of hanging up his playing boots just yet either.

Lining up alongside Sean Winter in the Team of The Decade midfield, with the central midfield spots to be decided this week, Gibson put his impressive form at Stranraer down to something simple: happiness.

He said: “Enjoyment and the feel good factor every time you came through the door – that is what I put it down to.

“The two most successful spells I have had in my career were at Dunfermline and Stranraer and I think that is why I hold them so close to my heart.

“You wanted to go into training, you enjoyed it, you didn’t want to leave and, when you did leave, you could not wait to get back with the boys.

“I think if you are a player that is enjoying the surroundings and you are happy then you play your best football.”

However, it was not just on the field that he felt the club was deserving of praise.

He added: “I would have said Stranraer was probably an exception because it is everyone at the club.

“It is the backroom staff, the volunteers, everything like that.

“The people that do so much for the club that you don’t see.

“I would have said they were an exception until I joined Peterhead but I would say now that Stranraer is not an exception but one of few clubs that are like that and Peterhead are another one.

“Peterhead for a part-time club, people behind the scenes, I made some really good friends up there that I keep in contact with now.

“Special people who go under the radar and make sure the club is successful and it is the exact same at Stranraer.”