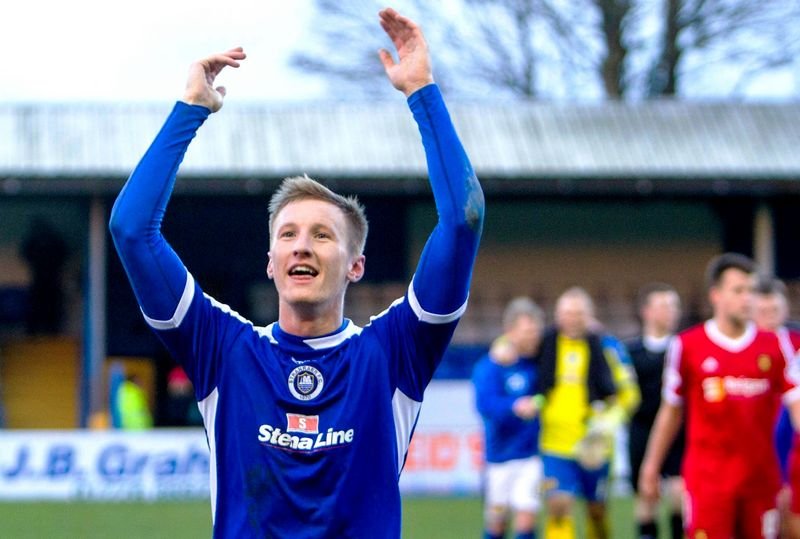 LOAN signings can often, simplistically, be split into one of two categories: good and bad.

A temporary switch from Falkirk in November 2015 proved beneficial for both Liam Dick and Stranraer.

The young defender enjoyed the move so much that he made it permanent and clocked up nearly 100 appearances before he returned to the Championship.

Now, with a further 85 appearances under his belt in the second tier of Scottish football, Dick hailed Stranraer’s impact on his career.

He said: “Without Stranraer, I would not be where I am now.

“I came in as just a young lad who had not played a lot of games.

“There are boys who go out on loan to clubs and they play a couple of games, they are in and out of the team and it does not really work out.

“I was lucky enough that I played and was consistent and managed to rack up nearly 100 games and I was still, not necessarily a kid, but, I was still young.

“I learnt so much in that time and I would not have got the chance to go and play in the Championship with Dumbarton if I had not been at Stranraer and learned everything, not just in the second six months, but the start of the loan spell, and being bottom of the league and managing to get into the play-offs.

“It was a rollercoaster of everything at Stranraer.

“I can remember when we went out on penalties to Ayr – that was the worst I have ever felt after a game.

“I can remember getting back in the car after the game and usually I would chat away with my mum and dad but I remember just being silent for a lot of the journey.

“That was one thing that definitely pains me, the hardest memory from going from scoring my first goal in the play-offs to losing it in the final.

“That memory hits a lot harder – I’ve never watched that game back, it was too close to the bone.”

Dick became the third player in Stranraer’s Team of the Decade, slotting in at left back.

The former Falkirk man took nearly 50% of the vote and was thrilled to line-up alongside Scott Robertson, at right back, and goalkeeper David Mitchell.

The defence will be complete this coming week with the selection of two central defenders.

Dick thanked the fans who had voted for him and was looking forward to seeing who would be his team-mates.

“Stranraer had a lot of top, top players and it is a great start to the team with Scott Robertson and David Mitchell.

“I am sure there will be many other good players – you had Jackson Longridge whose career has gone well – I’m definitely honoured and thank you to everyone who voted.

“I will be very interested to see the rest of the team and how it shapes up.”

It was Brian Reid who brought Dick to Stair Park, signing a two-month loan deal which took him into 2016.

He joined a struggling Blues side and they took just two points from his first five games.

It would all change on Boxing Day 2015 though during a trip to Ochilview.

Ross Meechan put the Warriors in front that day but a Craig Malcolm hat-trick, as well as strikes from Jamie Longworth and Sam McCloskey gave Stranraer all three points in an eventful 90 minutes.

In comparison, the Blues had scored five goals in the previous 727 minutes.

Dick said: “I remember wee Sam McCloskey scored one and set one up.

“I came on in the second half and I can remember watching the game more than playing in it.

“We were on a bad run and I was not in the team.

“I remember wee Sam was having the game of his life.

“I remember it was a massive turning point for us, mentally, but I think we had actually played better in other games and we had just not got the results.

“The Stenhousemuir game was one I think where just everything went our way.”

It kick-started an incredible run as Stranraer lost just four more league games that season as they raced up the table and into the promotion play-offs.

An eventful two legs against Livingston followed, with Dick scoring a vital goal in extra time.

The scores were locked at 6-6 when the full-back found space on the left, before rolling the ball beyond Marc McCallum in the home goal.

He said: “I’ve never seen that goal, which I am absolutely heartbroken about.

“I can remember it clear as day in my head.

“I was still full-time and at full time I still felt fit and I felt good.

“I can remember saying get the ball out to my side because there is loads of space.

“I felt like I had loads of energy to keep bombing on and I can just remember the ball has come out to me.

“I’m not that far wide but they were so pushed over on the opposite side.

“I’ve just started running with the ball to get forward and I think as I kept going and going and the next thing I am at the box.

“I’ve just swung my leg at it and hit it as hard and low across the goalkeeper as I could and it has managed to trundle into the bottom corner.

“Usually, I am quite prone to looking for a pass but for whatever reason I chose to shoot and managed to get the goal.

“I remember my arms were out – I did not know what to do for a celebration – and all the boys ran to me and had a massive pile up in the far away corner.

“I’ve never seen it back and I’m a bit gutted.

“So, anybody at Livingston, if have you it on video and want to send it to me privately, I would appreciate it!”

Dick’s departure came as the club was struggling financially towards the end of 2017.

Within a matter of weeks, the left back had left the club alongside Steven Bell, Cameron Belford and Ryan Wallace.

However, despite the rumours of financial uncertainty behind the scenes, the move to Dumbarton came as something of a shock to the full-back.

He told the club website how he played a role in one of the goals in what turned out to be his final game and when Stevie Farrell asked to speak to him he was expecting the worst.

The defender said: “I was just expecting him to say I was poor or whatever.

“He just said Dumbarton have made an offer for me and I was shocked.

“Obviously, he had a relationship with Stevie Aitken and they had a boy with a bad injury at Dumbarton.

“Faz said they needed a left back and told me that it was a step up for me, an opportunity for me and obviously with the financial situation at the club they could not say no.

“They were looking to get players off the books but there was no sense that he was trying to force me out the door or anything.

“He was very positive about it, said I had been great with the club but it was an opportunity to play at a higher level.

“It all happened very quickly.

“From leaving the game, by about 8.30pm or 9pm, I had spoken to Stevie Aitken and it was pretty much sorted.

“I was with Dumbarton the next day when they were training just to get familiar with the boys and everything.

“It was quite a shame that I never really got the chance to say goodbye to the boys because my time at Stranraer was excellent.

“That was really where I started playing proper football and the first changing room I had gone in where I was really close with everyone.

“There are boys who I had never met before and the fans were great as well.

“My mum and dad would come to every single game.

“They would always travel down and they got to meet everybody and the fans as well.

“It is always fond memories I have got of Stranraer.”