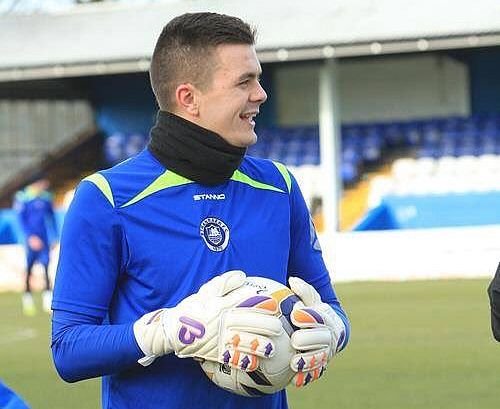 IT WOULD be no exaggeration to say that Stranraer Football Club changed David Mitchell’s life.

The goalkeeper would clock up nearly 250 appearances on the pitch and met his future wife off of it.

Initially signed as a teenager on a season-long loan from Ayr United in the summer of 2009, he became a firm fixture between the posts over five seasons.

The 241 appearances, with countless spectacular saves along the way, were enough to see Mitchell take the goalkeeper position in our team of the decade, with 75% of the votes.

He said: “Being named in the team of the decade is something I am really proud of and very grateful to those who voted for that.

“It is quite a big thing, especially with the other goalkeepers the club has had since I left – Cameron Belford and Max Currie.

“It means a lot to me, it really does and I can only thank everybody for actually voting.”

Mitchell had been an unused substitute behind Stephen Grindlay at Somerset Park as Ayr won promotion to the First Division in 2009 under the leadership of Brian Reid.

Teenage Mitchell was keen to get game time and made the move to Stair Park in a bid to taste first team football for the first time.

He said: “Stranraer was very welcoming and a great club.
“Everybody was really nice and it was my first taste of senior football so it was a bit of a shock at the same time.

“Everybody at the club helped me settle right away and in that first season I did really well for the club.

“That is why I returned after that.”

He adjusted to the demands of the first team, although he suffered a red card away to Dundee in just his second game.

That blemish aside, Mitchell helped the Blues to finish seventh in his first season and, feeling his chances remained limited at Ayr, made the move to Stair Park permanent.

Four more years saw Mitchell see off rivals for the number one shirt and saw the Blues win promotion and then go on to challenge for the League One title.

His impressive performances caught the eye of bigger clubs and Mitchell was offered the chance at full time football with Dundee in 2015.

Looking back on his time at Stair Park, he said: “There are plenty of highlights – I loved my time there.
“Highlights were drawing 1-1 with Rangers at Ibrox; the season we should have won the league (2014/15); the games we played against Dunfermline that season were brilliant; and, obviously, the last game of the season when we played Stenhousemuir to stay up (2012/13).

“That is the one that always sticks in my head because it was a real tough season.

“The manager had built a squad for the Third Division [Stranraer were promoted after the demotion of Rangers] and to win that league.

“It is a big jump in the leagues.

“We were not really prepared to be in the Second Division.

“For low points, coming so close to winning the league.

“That will always stick with me because I think we deserved to win it.

“We fell short and it was tough to take.

“Then, when we got to the play-offs I thought we still had another chance at it.

“We had played Forfar that season and always did well against them but we played them in the play-offs and got absolutely battered.

“It was tough to take, it was really hard to take that one.

“I remember we played Albion Rovers in the play-off finals (2011/12) and lost on penalties.

“That was another tough one but, to be honest, the more enjoyable moments during my career at Stranraer outweigh those bad ones.

“I absolutely loved my time there and it is a special club.

“I have got a real soft spot for the club, I’ve got family down there and I met my fiancee Lynnette through the club and we have got two kids now.

“It is a place I absolutely love and the club is a special place.”

Now, after a difficult few years with injuries, the 30-year-old is back enjoying his football at Clyde where he has linked up with fellow former Stranraer goalkeeper Chris Fahey.

Summing up his time with Stranraer, the shotstopper said: “It is a welcoming club and everybody is just so friendly.

“Everybody would do what they could to help you.

“The likes of Robert Rice and Iain Dougan – these guys are just always so happy to see you.

“You always get a good laugh with them, they are really nice people and I have got a lot of time for them.

“I would not be where I am right now if it was not for these people.

“It is something I always keep in mind and appreciate.”