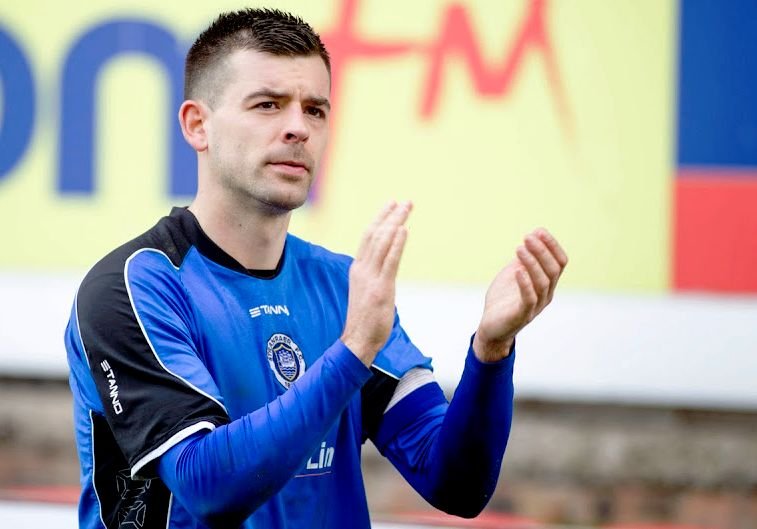 ALMOST a decade ago, Steven Bell played his final game for Dunfermline Athletic.

Little did he know, those 18 minutes against Greenock Morton would be the last time he kicked a ball for almost three years.

Back in the game with Stranraer, Bell’s journey to recovery was only just beginning and, without the club, it is likely his boots would now be hung up.

Instead, he is closing in on 400 senior games.

Speaking about his chances of returning to football when he moved to Stranraer, Bell said: “To be honest, I was not entirely 100% confident.

“There is nothing you can actually do, you cannot physically play through something like that as much your head might be telling you different.

“I can honestly say Stevie Aitken was absolutely massive for me and I owe so much to him for getting me back playing.

“A lot of supporters definitely won’t know this, to be honest not many people at the club will know this, but in the early stages of my time at Stranraer I asked Stevie to release me because I was still getting pain in my ankle.

“Stevie said ‘No, I don’t want to release you.

“‘I take into consideration that you don’t want to play and I won’t play you, that’s fine, but let’s say that you are still involved in the team and you are available for selection but I just won’t play you.

“‘What I want from you is I want you in and about the team, I want you to be an influence in the dressing room and use your experience.’”

“Hence the reason why I never played about ten games in a row and the game I did end up playing was away to Rangers on Boxing Day.

“The only reason I played was because Chris Aitken got injured a couple of weeks beforehand.

“If it wasn’t for Chris getting injured, I wouldn’t have played against Rangers and then come January I would have been away as I had asked to be released from my contract.

“I probably dare say that I wouldn’t have kicked the ball again but what’s happened is that Stevie said he wanted me to play one last game if that was ok, it was a big game and Chris was not available.

“I played and my ankle actually felt alright and I continued to play after that and I haven’t looked back since to be honest.”

Bell, who began his career at Dundee United, would go on to become a central figure under Aitken, Brian Reid and Stevie Farrell.

Clocking up 159 appearances, Bell also found the net nine times as the club challenged at the top of the League One table.

However, it was a failure to win the league in 2015 that Bell described as his low point from his time at the club.

He said: “That was a low point because we did so well and losing in the play-offs in the manner we did for me was completely unacceptable for the level of performance the players were putting in all season.

“To be away to Forfar and get beat 3-0 was not acceptable at that time.

“We set standards for ourselves and we fell below that standard especially that day.

“Personally, a low point was the Morton game.

“I conceded a penalty and, to this day, I’m still adamant it was a complete dive but the player conned the referee.

“Fair enough if you dangle a leg then the referee is sometimes going to give it; that was a personal low point for me.

“If we had won that game, we would have won the league.

“High points for me I think would be the way we performed against some teams, probably more so Dunfermline because they are my former team.

“Personally a high point for me would be scoring the winner against them in a 2-1 win down at Stair Park.

“That was the first time I captained Stranraer as well.

“It was a memorable day for me, scoring the winner in the last minute and I think I played well that day as well.

“A lot of highs and a lot of good seasons there.”

Bell left the club at the beginning of 2018 as financial problems started to bubble to the surface.

Cameron Belford, Danny Stoney, Ryan Wallace and Liam Dick all left the club but Bell’s departure was not related to the finances.

Instead, he said: “I was leaving the club in January regardless of what happened.

“That was agreed at the start of the season with the manager.

“I just felt my time had come to an end at Stranraer and it was time for a new chapter for me.

“It is sometimes difficult as a player to stay at a club for so long.

“I have been quite loyal for every club that I have played for.

“I have been there for long periods of time.

“I have not played for a club for a season and then moved on and then went for another season somewhere else.

“I just felt I had given a lot of loyalty to Stranraer and at that time I was owed a wee bit of loyalty back by granting me my wishes and I wanted to go.

“It was nothing to do with the club in general, with the finances or anything like that or people at the club.

“I still see some people at the club to this day, guys like Robert Rice, Alex Thomson, probably those two more so.

“They are excellent friends of mine who will be friends for the rest of my life.

“I just got to the point where I needed a new challenge for me.”

Now at Ayr United, Bell admitted he was “surprised” to be named alongside David Mitchell, Scott Robertson, Liam Dick and Frank McKeown in the team of the decade.

The veteran defender won the public vote ahead of Scott Rumsby and Morgyn Neill to complete the team’s four-man defence.

“I’m surprised, I thought I had burnt my bridges with some of the fans because of where I am at just now.

“It is a great honour and I loved my time at the club.

“I have always said that.

“I made some friends that will stay friends for life.

“Nobody can take away the memories and experiences I have had at the club.”