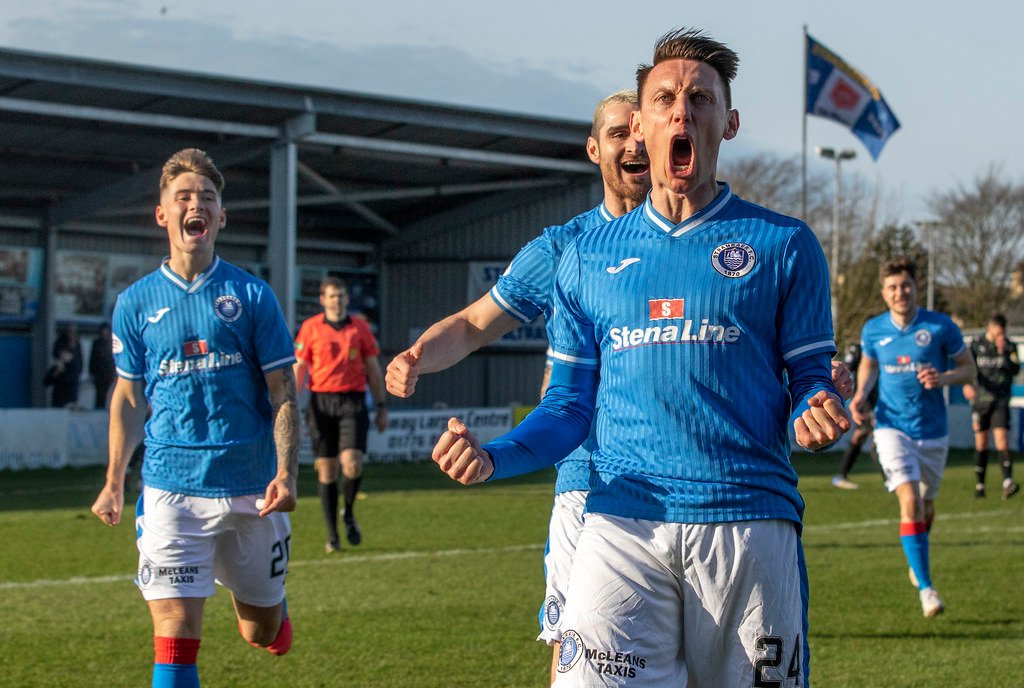 Former Stranraer striker Tom Orr returned to haunt his old club as both sides had to settle for a point.

Darryl Duffy had given Stranraer an early lead before the Blues squandered a number of chances and Orr made them pay midway through the second half.

Manager Jamie Hamill was able to name the same side that had started in the 2-1 win over Elgin City seven days earlier.

There was also a place on the bench for Andrew Downie, deputising in the continued absence of Jack Baker.

Stenhousemuir have lost the previous two meetings between the clubs this term but started quickly and probably should have been a goal up in the opening five minutes.

The home defence was caught out by a ball over the top and when a cross was swung in it found Robert Thomson at the back post.

The striker turned and fired at goal from six yards out but Sam Ellis was in the right place to make the block from close range.

Stranraer quickly made their visitors pay when they took the lead just six minutes later.

Matty Yates had broken through but saw his shot saved by on-loan goalkeeper Peter Urminsky.

From the resultant corner, Dean Hawkshaw swept the ball back to Duffy on the penalty spot and he fired home.

Almost immediately, Orr stung the palms of Luke Scullion with a fierce drive.

Increasingly though, it was Stranraer creating the chances.

Yates twice came close in quick succession, seeing one effort saved by Urminsky and the other fly over the bar when he was offside.

Then, Urminsky had to backpedal to get to Sean McIntosh’s looping cross as Stranraer took a 1-0 lead into the interval.

The best chance to double the lead would come just nine minutes after the restart.

A great team move involving Yates and Scott Robertson saw the player/coach role the ball back to Hawkshaw near the penalty spot.

Unfortunately, his first time effort sailed well over the bar and Stenhousemuir would soon turn up the heat.

The visitors, managed by former Stranraer favourite Stephen Swift, saw a lot of the ball before the hour mark without ever truly calling Scullion into action.

Just when it looked like Stranraer had weathered the storm they were caught on the counter attack.

Thomson ran at the defence from near the halfway line and played a great through ball for Orr, who coolly fired across Scullion for a leveller.

Orr, who formed an impressive front trio at Stranraer last season with Duffy and Ruari Paton, had the ball in the net again minutes later but it was ruled out for offside.

As the half wore on, Stranraer again started to get on top but could not come up with a winner.

Balls flashed across the box with no takers and it was not until injury time that they forced the goalkeeper into a save.

Robertson got onto a long ball into the box but he could not get the necessary power to beat Urminsky as the game finished 1-1.

Stranraer are back at home this coming weekend when Albion Rovers make the journey to Stair Park.

The unbeaten run now sits at two but it is three points that are needed to keep flickering play-off hopes alive.