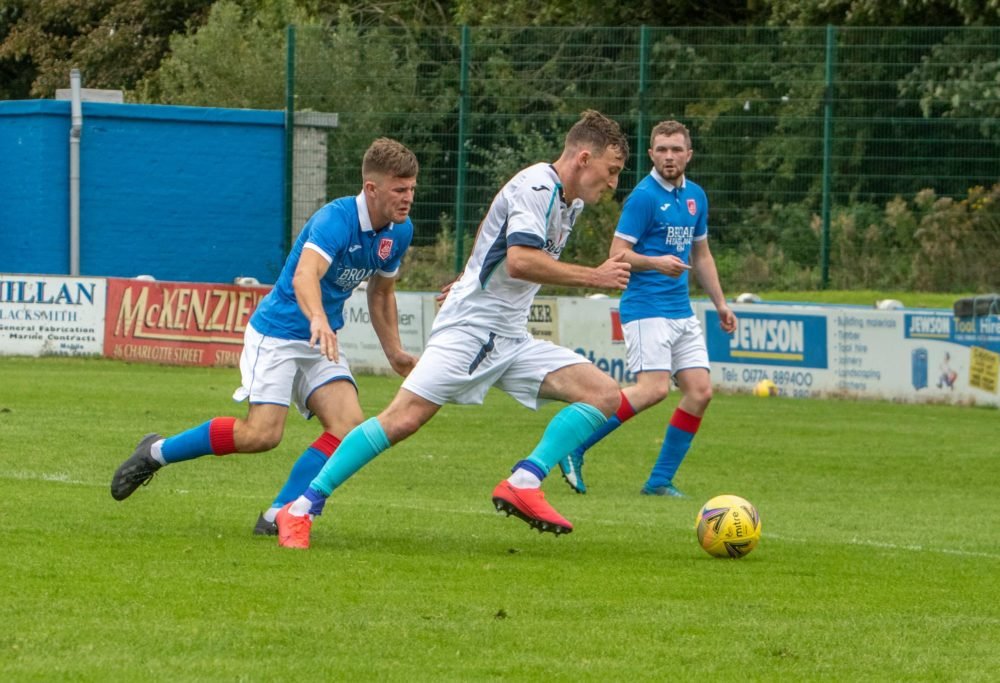 PRE-SEASON began with a comfortable victory for Stranraer’s first team over their reserve counterparts.

Both sides were playing their first game in several months at an empty Stair Park, with fans having to watch the game through live streaming.

For the limited number in attendance, it allowed them the chance to see the new faces in both teams.

The reserves got off to the worst possible start with just 35 seconds on the clock.

Confusion in the defensive ranks saw Robbie Murray nod Jamie Hamill’s long ball over his onrushing goalkeeper Blair Alexander and into his own net.

There was little between the two sides in the opening stages and the South of Scotland side could have been level just after the quarter hour mark.

Hamill was caught in possession midway inside his own half and Mitchell found himself clean through on goal.

New signing Greg Fleming stood tall though and made the save before Stranraer cleared the danger.

There was another impressive save at the other end of the park.

Ruari Paton should have doubled Stranraer’s advantage but steered his header from six yards straight at Alexander, who reacted well to palm it to safety.

However, that only delayed the second goal by a matter of seconds.

From the resultant corner, James Hilton, first team’s top scorer last season, danced inside a few challenges and fired home from around the edge of the box.

Stranraer added to their advantage just two minutes before the break.

Adam Cummins clipped a ball over the top and Cameron Elliott kept his cool to take a touch and slot under Alexander.

The half time interval brought a number of changes for both teams, with only Grant Gallagher remaining on the bench for the first team.

Only Hilton, Kieran Millar and the defensive trialist remained on the park from the first half for the first team.

The substitutes wasted no time in trying to impress and came very close to making it 4-0 with just seconds of the second half played.

Lewis McIntyre, among those to have come on for the second half, swung in a cross from the right but the trialist could only direct his header over the crossbar.

There was not long to wait for the fourth goal and it involved two substitutes in Andy Stirling and Joao Victoria.

Stirling’s reverse ball cut open the reserves defence and Victoria made no mistake in smashing the ball past the substitute goalkeeper Andrew Downie.

The fifth goal was not too far away and came from yet another substitute, Darryl Duffy.

McIntyre was the provider this time with a low cross from the right and Duffy snuck across his man to fire home from a few yards out.

The experienced frontman should have added a second just minutes later.

However, Duffy was denied by a brilliant goal line block from Dean Agnew.

Hilton then could not turn Victoria’s ball home before Stranraer did make it six just after the hour mark.

Victoria was again at the heart of it as the former Raith man stepped past Robert Smith before curling beyond Downie.

The first team completed their substitutions with just over 20 minutes left with the welcome return of Gallagher.

The midfielder suffered a season to forget last year through injury but came on for Hilton.

Scoring was complete 10 minutes from time with Victoria completing an impressive hat-trick.

He burst through on goal and again showed great composure to slide the ball beyond Downie.

The result was irrelevant with both teams enjoying an impressive workout in the long road back to full match sharpness.

The reserves competed well for large chunks of the game but the clinical touch up front was the difference between the two sides.

Queen of the South 2-1 Stranraer