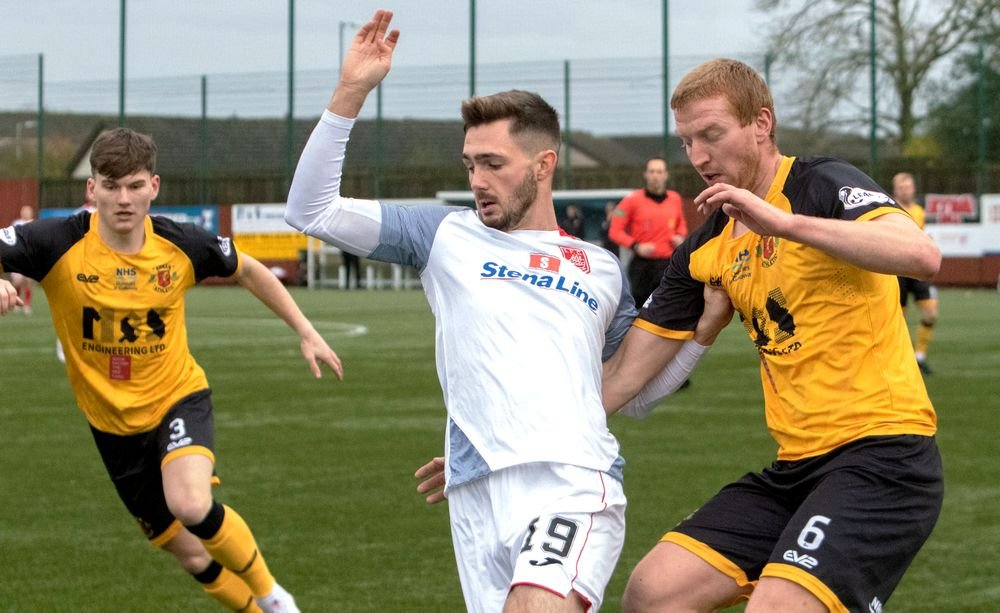 Stranraer held firm despite being a man down to take a hard-earned point at Galabank, thanks to some resolute defending and a little bit of Andy Stirling magic.

Grant Gallagher was dismissed for a tackle which resulted in a bad injury for Annan midfielder Ryan Purdue, before Stirling’s bouncing strike from distance put the ten-man Blues in front.

Owen Moxon’s unstoppable strike levelled the scoring just before the break, but an improved defensive display saw Stranraer hang on for a share of the spoils.

Stevie Farrell made two changes from the side which suffered a 4-1 defeat to Elgin City on the opening day of the season.

Veteran campaigner Jamie Hamill regained the captain’s armband as he looked to shore up the defence, with Thomas Orr making his first start for the Blues in attack.

As in previous weeks, Stirling was the danger man for Stranraer, and he was first to call home keeper Jordan Pettigrew into a save with a shot from the edge of the penalty area.

Equally significant, however, were Hamill’s contributions at the other end of the pitch, with the former Kilmarnock and Hearts man producing a good block to deny Matty Douglas early on.

Stranraer were claiming loudly for a penalty when Ruari Paton was charged down in the box by Aaron Splaine, but referee Barry Cook waved play on.

But the real turning point arrived in the 27th minute, as Purdue raced clear through the middle.

Gallagher attempted a sliding tackle to hook the ball away, but only caught the leg of Purdue, who landed awkwardly.

Players from both sides called frantically for medical assistance, with Purdue visibly and audibly distressed as he left the field on a stretcher with a suspected double leg break.

The match official initially showed Gallagher the yellow card, but changed it to red after consulting with his linesman.

Despite being down to ten men, it was Stranraer who took the lead after a long delay.

With seemingly few options available, Stirling turned the defender on the edge of the box and rattled a long range effort into the corner of the net from 20 yards.

Stranraer were always going to come under heavy pressure, and the hosts soon made the advantage count with an equally spectacular equaliser.

Moxon, teed up on the edge of the box by former Blues striker Max Wright, launched a rocket into the top corner to send Annan level.

And Wright himself would be denied by Stranraer goalkeeper Greg Fleming before the first half was done.

The second half matched the physical nature and intensity of the first, with chances falling to both sides.

Douglas’ defensive counterpart Lewis Hunter was perhaps fortunate not to see red after the referee chose not to punish him for a second bookable offence.

However, Annan had the best opportunities to put the game to bed.

And it took a goal line clearance from Hamill to deny Iain Anderson’s volley, which bounced off the artificial surface and looped over Fleming’s head, before the skipper headed clear.

Moments later, Aidan Smith managed to turn on the six yard line, but could only scoop a shot over the bar.

But that would be as close as either side would come to a winning goal, as Stranraer held on to record their first point of the new season.

The Blues face Queen’s Park next Saturday at home, with live video coverage available to stream on Stranraer FC LIVE.