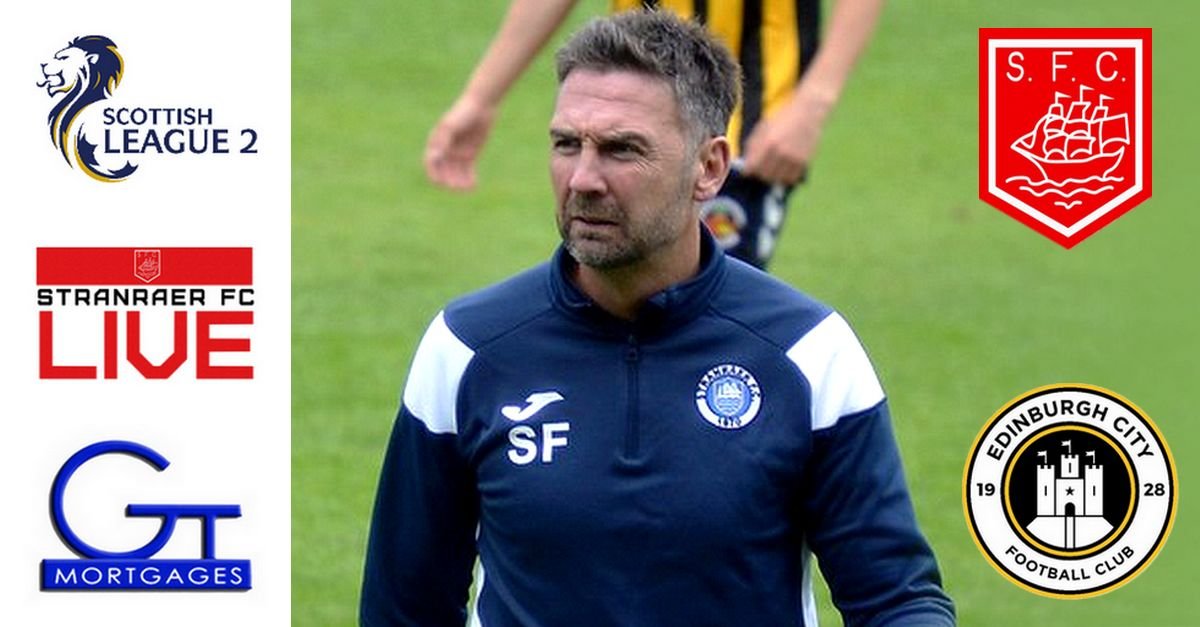 A trip to Ainslie Park will provide a “benchmark” for Stranraer, according to Stranraer boss Stevie Farrell.

A win over Hamilton Academical was followed by a penalty shoot-out defeat to Ayr United, with both coming after a victory over Cowdenbeath for the first three points of the campaign.

Farrell felt his side deserved plenty of praise for those showings but was keen to move on and focus on the games still to come.

He said: “It will be a good benchmark tomorrow (Saturday).

“Edinburgh City have been up there for the last two or three years in League Two so they know what it takes.

“They have had a good continuity in their squad and in relation to the players understanding and knowing what it takes to be up in that top end.

“We know we are in for a very, very difficult and competitive game but we are ready for it and looking forward to it.”

The manager will be without the services of three players tomorrow, with Cameron Elliott and Sean Burns joined on the sidelines by Andy Stirling.

Farrell said: “Cameron Elliott is getting better; it is improving.

“We have seen a real improvement in it and he is feeling stronger.

“Andy Stirling is not available this Saturday but we are hopeful he will be back next Saturday.”

However, the squad has been strengthened with the addition of Matthew Yates and Josh Walker.

Yates has spent time in the youth systems at Rangers and Hibs while Walker was a team-mate of Stranraer goalkeeper Jamie Walker at Kilmarnock.

Farrell said the duo had impressed in training and he was keen to see them fight their way into the team.

He said: “Both lads came in initially on trial and they have joined in with the group fantastically well.

“Their training and application have been good and you can see that they have been coached at good clubs.

“Technically, they are very good players and they have got a great attitude and professionalism.

“They have got a desire and hunger that they want to go on and become professional footballers in the SPFL.

“We’ve given them this opportunity, it is a short-term contract until January but that is not ruling out a longer deal if it suits both parties.

“I’m delighted to have both players on board and I am hopeful that they will have an impact.

“They knew when they came into the club that there were no promises and it was both boys who forced the hand.

“They forced it with how good they were, how professional they were and their application and how well they showed up.”

Four goals were shared in the first half with Robbie McIntyre blasting an unstoppable drive beyond debutant Lyle Avci with just seven minutes on the clock.

Adam Cummins headed home an equaliser before Gareth Rodger scored a header at the other end.

Craig Thomson’s free-kick deceived Avci as the capital side took the lead for a third time and the game was all over when Blair Henderson scored.

A cup tie in August last year was the last time Gavin Ross took charge of a game involving Stranraer.

Stair Park welcomed Rangers’ Under 20s side in the League Challenge Cup. It would be the Ibrox side who picked up the win with Josh McPake and Jamie Barjonas on target.

For an away game involving Mr Ross, fans need to cast their minds back to November 2018. Stranraer travelled to Ochilview and picked up three points thanks to two second half goals. Grant Anderson scored but was later stretchered off while Alan Cook was sent off. PJ Crossan smashed home a second in injury time to wrap up the win.

It was just before the lockdown that Mr Ross stepped out onto the pitch at Ainslie Park. Edinburgh City hosted Albion Rovers and it was all one-way traffic after the first goal. Nicholas McAllister was sent off and Blair Henderson scored from the spot. To the Coatbridge side’s credit, they held out until the second half when Daniel Handling and Alex Harris found the net.

We aim to bring you extended highlights, interviews and a match report from Saturday’s league fixture in the capital.

You can watch live video coverage via Edinburgh City’s streaming service, priced at £9.99.