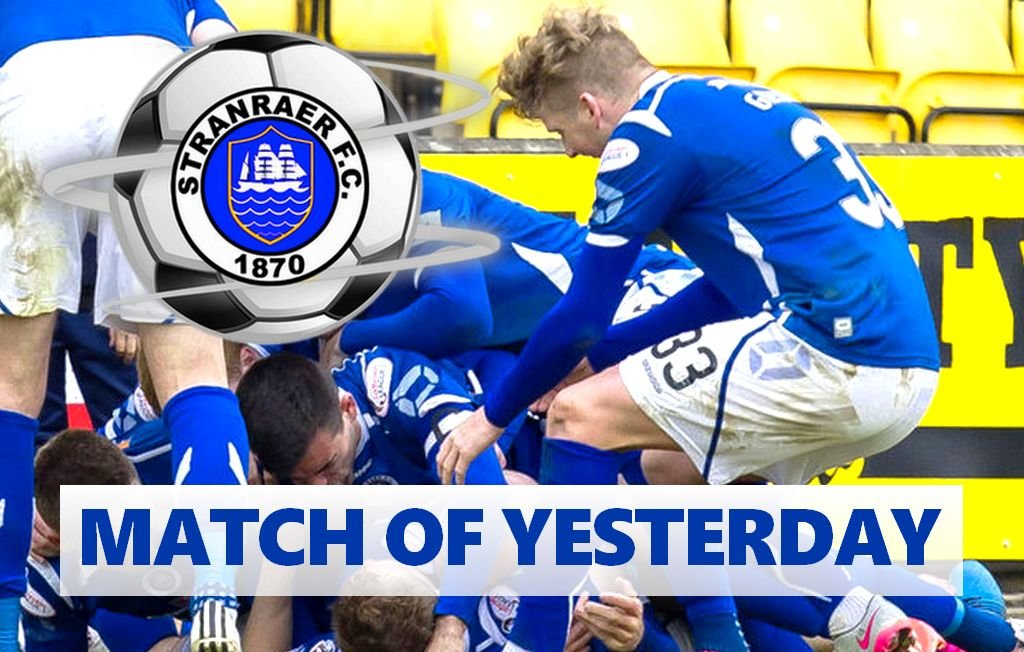 Whether it is a last-minute goal, derby day delight, giant-killing or something much more personal, there are games which fans can recall every detail from, even years down the line.

In the ninth of our Match of Yesterday series, we ask Willie Gibson for his favourite game during his two spells with the Blues.

The midfielder made a total of 98 appearances – with just three from the bench – and scored 25 goals.

In part one, Gibson spoke about the first leg of the play-off semi-final clash with Livingston. Now, he talks about a thrilling 120 minutes in West Lothian.

It did. I cannot even remember too much of the second leg!

I know that Paul Cairney scored an absolute wondergoal and I think Jammer (Jamie Longworth) scored the winner. I think they scored early and equalised before half time.

It was uphill and I think everybody wrote us off as well because to go 2-0 down against Livingston, a full-time team and fitness coming through a little bit more, but we showed the character again.

I’ll use that word ‘character’. That year there was something special in the dressing room. You don’t quite appreciate it until you look back on it. The players that we had in the dressing room – Malky (Craig Malcolm), Steven Bell, Scott Robertson, Mark McGuigan, Andy Stirling – it was a very, very good squad.

It was crazy. Paul Cairney scored an absolute wondergoal. We got our tails up from that and then the celebrations after extra time… did Jammer score a couple of minutes from the end?

Q: If we look at Paul Cairney’s goal first of all. His first – and only – goal for the club. What a special goal.

Unbelievable. We always gave him a bit of stick because the boy had great ability.

I always used to wind him up because he would stand over every free-kick and think he was going to hit it. He would always ask me and there were a few good free-kicks that I scored and he was standing over the ball and would say ‘come on Willie, just let me hit it!’

He would do it in training; he would score worldies in training. You would look at him and think ‘how did he do that?’ That goal was one of those moments.

I think his fitness actually made him hit that shot. I said that to him at the time. He was blowing out of his bum! He took a shot, a wonderful goal and a great occasion for the lad.

I’m pretty sure I scored goal of the season that year and I gave him my trophy.

Q: At that point, it would have been 6-4 to Stranraer. Livingston need to score a couple of goals to pull themselves level. I think I am right in saying, it gets to the 89th or the 90th minute and then Livingston score two goals. What happened between the full time whistle and extra time kicking off? Anyone watching that would have thought ‘momentum has totally, totally gone to Livingston and that is who is going to progress here’.

Correct. I don’t normally think of things, I normally just play the game out and think about things afterwards.

I think momentum had gone to Livingston but this is what it is down to: a stake in the final of the play-offs. We had worked so hard throughout the season, we had a great lead going into that game and not to throw it away.

Q: It goes into extra time and somebody else got their first goal for the club, Liam Dick scores. That makes it 7-6 and it sounds more like tennis than football. There is still a bit of extra time to go and then Jamie Longworth scores in what must have been the last couple of minutes. What goes through your head then? It is 8-6, barring some kind of miracle that is probably it, but what goes through your mind when you have only got a few seconds left and you know that the game is surely in the bag?

I think in terms of that it is professionalism. Don’t count your chickens before they hatch. It is that old saying.

You just keep going to the final whistle. I think that was the case with everybody. Although we had that cushion and were almost there, we were not quite there.

It was just a case of keeping the head and doing nothing silly. We knew that one goal for them meant they would throw everything forward and anything can happen in a couple of minutes of football.

It was professionalism, togetherness and being hard to break down. We got boys behind the ball to see the game out and then the celebrations followed.

Q: We touched on the celebrations after the first leg, what was it like after the second leg when on this occasion you know that particular job is fully complete?

The away support we had that day was terrific. Stranraer fans, there are not many of them but the away support was brilliant. They followed you every week. They are passionate, they love their local team and that was a big one for them.

They saw everything in that game. Ninety minutes, extra time, Livi going up, us going forward, they saw a lot and they stuck with us. They cheered us on when we were 2-0 down and the biggest thing as well, Livingston got relegated that day and the Livi fans applauded us.

Q: Obviously, that took you through to the final – I will not dwell on it too much – over the two legs against Ayr United, do you think the right team won?

No. It’s not sour grapes, it is nothing like that. Over the two legs, we deserved to win.

It was difficult losing on penalties after going that far. I think the goal we conceded at Stair Park late on, we were 1-0 up and had two or three great chances to put the tie to bed in the first leg and we then conceded a late goal.

That gave Ayr United something to hold on to. They have got the home support, their pitch and everything in the second leg. We missed some great chances again and penalties are never a nice way to lose it.

Saying that, Ayr did well that season as well so take nothing away from them but it is one of the sorest points in football ever. For a team like Stranraer, going to the Championship that year would have been some achievement.

Q: Rounding it off, in terms of yourself, I think I am right in saying you started the season at Peterhead, moved onto Stenhousemuir, what are you doing with yourself now?

In early November, I took a bit of time out. I took the Queen of the South reserves manager job and it is quite hard to juggle training full time there, having my own football academy and then making training.

I was going to take time out until January and then look at something with less demands. Then, I had already played for Peterhead in the Betfred Cup, which snookered me. I did not realise that the Betfred Cup counted so [after Stenhousemuir], I could not then go and play for another SPFL team because I had already played for both Peterhead and Stenhousemuir.

My options were to go to the Lowland League, where I had a couple of sniffs, or what I opted to do, which was play as a trialist for three games for Queen of the South reserves. That meant I could keep fit, decide what I wanted to do, and I ended up just signing with the reserves to play with them until the end of the season. That meant keeping myself fit for the start of the season and then make a decision.

There is no question about it, I want to keep playing. If anything, this [the coronavirus lockdown] has shown that you should play football for as long as you can. I’m far from looking to retire – I’m fit, I’m healthy, free of injury – touch wood – and I will go on to play again next year.

I’ve spoken to a few clubs and I think once things get sorted out, however long that takes, then other conversations will be had and I will decide what I am doing from there. I will be playing football.

Q: Obviously, the fans at Stranraer know you as a player and you have mentioned taking on the Queen of the South reserves job, how are you enjoying that side of things? A totally different perspective I imagine.

I am really enjoying it but it is not playing. It is a different feeling being in charge, setting standards and demands but it is something I have always wanted to do.

I have been working on it for the last two, three, four years going through the UEFA B licence and I was actually going to be going on my UEFA A and elite youth courses in May, which has obviously been kiboshed as well.

It is about continuing that development on the coaching ladder. The aim is to continue playing, keep progressing as a young coach and then, hopefully, at some stage player/coach, or player/manager, or even just a manager job will come up with a league club, and then take it from there.

Q: Obviously, you are a Dumfries boy so I imagine Queen of the South tops it for you in terms of keeping an eye out for results, but where do Stranraer rank when you look back on your career, in terms of where you have enjoyed your football the most?

Right up there. My only regret with Stranraer were the two play-off defeats. Wherever you are, you want to be successful. Although they were two incredibly successful seasons in getting to where we got, we did not win anything.

At Peterhead, the first year I was there, we got beat in the play-offs, which was another stinking feeling but we then went on and won the league the following year and you can leave there and be a winner.

The bond and the relationship I had with everybody at Stranraer was unbelievable. It is a very close club. People behind the scenes, I still speak to them now on a regular basis.

While I was at Peterhead or Stenhousemuir, Stranraer was always the first result that I looked out for and probably will be.