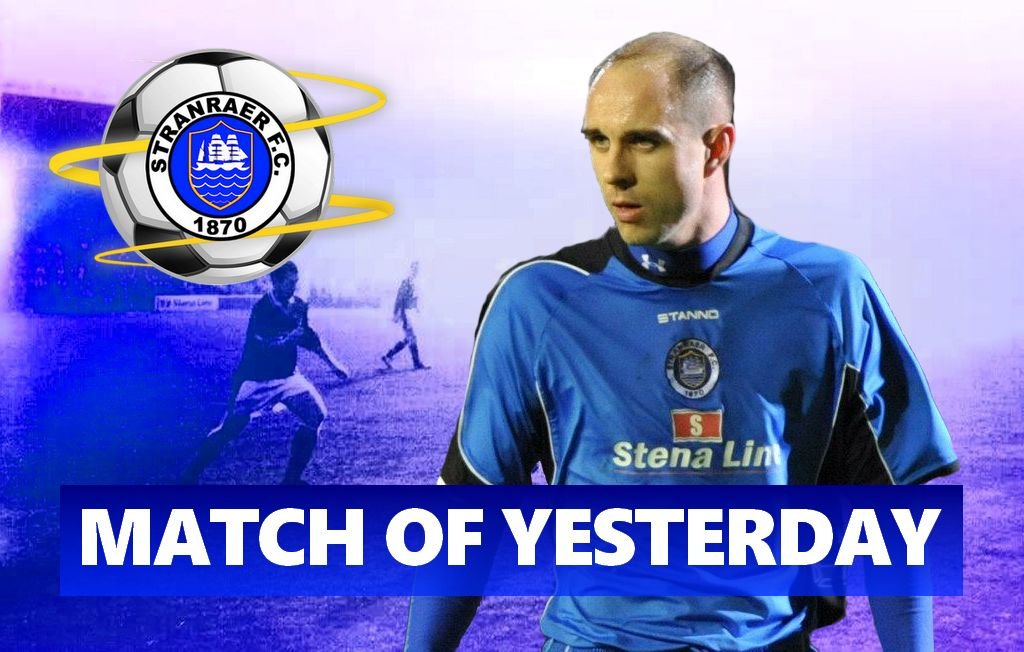 ONLY one man in history has scored for Stranraer against Rangers.

As the club approaches the Scottish Cup tie at Ibrox this Friday evening, we take a look back at Boxing Day 2013 when Jamie Longworth scored to cancel out Lee McCulloch’s first half penalty.

We spoke to the Blues goalscorer about the late strike, which is, undoubtedly, one of the most memorable Stranraer goals in recent history.

Q: Take us through the build up to the game?

Jamie: I think, if I remember rightly, Rangers had a chance to equal or beat a record on the day.

I am sure I remember that it was the first points they had dropped and a lot of folk fancied us to get relegated that season. The run we were on, we were sitting third or fourth, and I had been on a really good run scoring wise in the lead up to the game. We were really not fancied but we were on a good run of form and there was talk ‘could this be the game Rangers slipped up?

There were not a lot of people expecting us to take something. Mainly, just because you are playing Rangers, playing at Ibrox with a full crowd and they are unbeaten. I think most folk had written us off.

I had been at Queen’s Park the year before and played them a couple of times. Even playing in two games does not prepare you for the atmosphere. It is deafening and you can hardly hear the referee blowing his whistle or a team mate shouting to you from 10 to 20 yards away. I did have an idea beforehand but at the same time you could not fully prepare for an atmosphere like that.

It was the day after Christmas and Ibrox was fully packed. They were on a cracking run of form. We went for a meal in Paisley and then travelled over. From that point onwards, it was a bit of a blur.

Guys went out on the park and a few of the boys took pictures. Then, we started to get ready and down to serious business – it does not matter if you are playing Rangers, it is a chance to get three points. We were on a good run and you think ‘you never know, we could make the play-offs’. Any point is a bonus.

Q: Take us through the game?

Jamie: Sean Winter was not playing right midfield but more of a second right back, with Scott Robertson. Their threat was down the left with Lewis Macleod and Lee Wallace bombing on all day.

I remember us being under pressure to begin with and them trying to pressure us early on and kill the game off. We really dealt with the pressure well and they had one or two chances. One of those, Mark Docherty passed it back to David Mitchell and he slid out at Jon Daly’s feet and a free kick was given.

There were a few nervous moments but we settled in quite well. It must have been not long before half time and big Frank McKeown gave away a penalty – I don’t think it was a penalty, it was quite soft. It was a cracking penalty from Lee McCulloch, who took it well.

We were a wee bit annoyed but the gaffer just said ‘you are fine, don’t worry, you will get a chance and when it comes make sure you take it.’

Q: What do you remember about the goal?

Jamie: I’ve watched the goal back so many times. I am trying to remember, I think they had a corner and David McKenna managed to clear it. It fell to me literally on our own box and I nutmegged Bilel Moshni, I don’t know what I was thinking!

Ryan Borris took the ball and played it back to David Mitchell, who put the ball up the park. Scott Rumsby pushed up and won it back and we were on the attack. We didn’t panic and Borris played it to Lloyd Kinnaird, who then found Andy Stirling. He is as tricky as anyone I have played against or with.

I have then pulled away to the back post and I got clipped by Nicky Law. I kept my feet and the ball came to me. I was thinking ‘take a touch’ because I didn’t want to mess it up.

I steadied myself and then it hit the back of the net, and 30 seconds later I woke up on the bottom of the pile on! It is all a bit hazy but I remember Mark Docherty pulled me down into the pile on.

Jamie: I lost my bearings and remember running towards the Rangers crowd ahead. David McKenna had a celebration in front of the Rangers fans and I remember Andy Stirling falling backwards onto the pile.

He was motionless – maybe the relief that we had equalised. We had a ten man pile on, just David Mitchell was not involved.

I remember we all got together and were walking back across the pitch and asking how long was left. The referee was too busy hurrying me along. He said it was done, Rangers took centre, the whistle was blown and I remember putting my hands up in the air and standing for about ten seconds – half knackered and half of me wondering what had happened before.

Jamie: Naturally, everybody went across to the crowd. No-one had left and we were taking that in.

There were still a whole lot of Rangers fans, who were applauding us off the park, which was a nice gesture. Ally McCoist was waiting and shook hands with everyone.

At that point, the celebrations were still quite low key but once we got in the changing rooms we were high-fiving, cheering and just absolutely delighted. The gaffer spoke to us and said well done. Him and Stevie Farrell were just as delighted as us and Neil Watt was still there and Stacey Cathro and Laura Paterson (physiotherapists) were there as well, so was Alan Waddell.

Everybody was just listening to the gaffer and then we put the music on and that was it. There was a bit of a party for an hour or so before we got the bus back up the road.

Jamie: The game was played on Boxing Day 2013 and we were supposed to be playing two or three days later. The game was called off and we trained but the boys were dead on their feet because of everything we put into the game.

After that, we came back down from cloud nine. It was a case of two games left against Rangers but loads more realistic points. Nobody got carried away about catching them but we wanted to finish as high up as possible and ensure we got to the play-offs.

We played Dunfermline who were full time and had a really good squad. Cowdenbeath beat Dunfermline in the final. We got into the play-offs on the last day and Airdrie and Brechin were not too far away.

We got a cracking result in the first leg and the second leg went to extra time but it was not a great way to finish the season [Stranraer lost 4-2 on aggregate].

That game against Rangers though proved anything was possible and we were unlucky in the end not to go up.