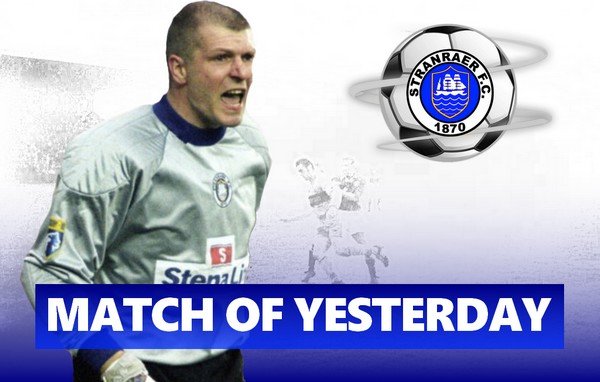 In the fifth of our new series – Match of Yesterday – we ask Barney Duffy for his favourite game during his time with the Blues.

The former goalkeeper, who can still be seen regularly at Stair Park on match days, made 279 appearances for the Blues over two spells.

Barney: I had a lot of great games with Stranraer and a few disappointments.

The two main games would probably be Morton here at night but the Challenge Cup final [where Stranraer beat St Johnstone 1-0 in 1996] is probably the best out of them all.

Morton were really hard to beat at 3-0 in the semi-final and I think Morton were probably a better team than St Johnstone. But for the Sunday game, the final, I don’t think you can beat that.

Q: Take me through the build up to the final?

Barney: We don’t get to many finals but I think Campbell Money tried to keep it as low key as possible. He did work in the background to get strips and things like that. We arrived at the ground and there was nothing untoward about it. Then Campbell lost the head because Stranraer forgot the socks.

My strip, which was yellow, was clashing with [St Johnstone and future Scotland goalkeeper] Alan Main’s and he did not have another strip. So, I had to change and the only strip I had was one in my bag, which I used for training. I used that, which was a grey/silver one, but apart from that there was nothing untoward in our build up. We all had our own thoughts in how you build up to a game but we just tried to keep it as low key as possible.

I think the weather probably helped us a bit because it brought both teams down to the same level. St Johnstone kept the ball very well and luckily enough they kept probing for that wee bit of space. We worked very hard to make sure they did not get too many spaces in the game.

The second half was probably one for us to never forget. They kept us camped in the box and I think we had two shots on target in the whole game but hey ho, it does not matter. It is what it is.

Nobody would have thought we would have won 1-0. It was an own goal but who cares? It does not matter how it goes in, whether it is the first minute or the last minute – I always say that. It was a day never to forget.

Q: What about your own build up to the game? Are you able to say it is ‘just another’ game or is it in your head that it is a cup final?

Barney: I was in my mid-30s by the time of the cup final. Although I came very late into the professional scene, I just took every game as it came. I had the same warm-up every week. I didn’t change my warm-up. John Taylor took us through the warm-up and it was just the same ritual as always.

I always remember at half time, Campbell was doing his team talk and Clyde has quite a big dressing room. He shouted: ‘Where’s Duffy?’. I was at the back of the dressing room, pacing up and down, saying I knew how busy I was going to be in the second half. We did not do anything different, we just got the sleeves rolled up.

Before the game started, we were in the tunnel waiting to go out and the manager of Forfar [Jim Weir] was saying let’s get out there and beat this team 6-0. Big John McCaffrey turned round and said ‘they’re going to beat us 6-0. No, they are not’. The sleeves were rolled up.

A few of the Stranraer guys had a few words with the St Johnstone boys before we went out, telling them what they were going to do with them and we did get in about them.

Q: Does it motivate you more when you hear the opposition team?

Barney: They had a great team. You could not take that away from them. They had a fantastic team. On a great day, they would have got their act together and beat us two or three nothing. But we were right up for it on the day. Every player was up for it. Every player had aggression.

We lost Tom Black in the first 20 minutes but young Del Boy [Derek Crawford] came in at left back and had a great game. He really did very well in the left back area. I think right through the team, the full team did that well. We shut down great. The rules have changed a little bit now with the passback rule, everything changes.

I think in general it was a fantastic day for ourselves and for the fans. It was a great night by the way! I came back down to Stranraer and had a fantastic night but you cannot forget the game.

Q: Was it one of those games where you felt every minute or did the 90 absolutely fly by?

At Clyde, you can see the big clock and I think we just got into hitting extra time and I shouted at the referee Kenny Clark and asked what time it was. He said if I did not hurry up with my kick outs, he would add another five minutes. I tell you, I was quick with my kick outs after that. As soon as I got the ball, I was kicking it up the park.

It was an enjoyable game and we made a few mistakes towards the end. John Robertson made a mistake towards the end and I managed to make a save to keep us in the game. I think if they had scored, they would probably have taken two or three goals off of us.

Q: Obviously, you would be at the other end but what do you remember about the goal and the celebrations?

Barney: The goal was from a free-kick. Jimmy Hughes took it from the far left of the right hand side and just put it into the box.

You always knew Alan Main was good to drop a ball. There would always be one in a game and that is what he did. He lost the ball and it was a melee. Someone stuck a big toe on it and unfortunately for them it was one of their players.

I think Tucker [Tommy Sloan] would have probably got there. He is claiming it anyway but he is not getting it.

I think, in general, an own goal [the goal was credited to Danny Griffin] for a cup final, it is not what you set out for it to be but you cannot complain. You would take it. We are in history.

Q: When the final whistle goes, what is it like then?

Barney: I think it was a relief but the boys were going daft. They were hugging each other, it was fantastic and there are great photographs from after it as well. The guys thoroughly deserved it and you could not knock them.

We went to Albion Rovers the following week and got beat 4-0 by Hamilton [who were groundsharing with Albion Rovers]. That’s football but the guys were great.

Q: You mentioned the party down here. Take me through the bus journey down here and the aftermath?

Barney: The journey was firstly from Clyde to the McDonald Hotel. Some of the guys said they were going out in Glasgow but I said I was going to Stranraer. I said there was going to be a party in Stranraer and I think I was the only player that went down, along with Campbell, Jim Denny (assistant manager) and John Taylor.

The rest of the guys went out in Glasgow but I said I was going out in Stranraer. It was a fantastic night.

Q: Was it a bit of a hangover the following weekend or was it just one of those things?

Barney: Football is football. To do so well, it is always hard to try to get to that level. Hamilton were a good team and we did alright. I think it was just before half time that we lost a goal and we didn’t really come out for the second half.

You cannot get every game right but I think the cup final was a one off. You cannot take it away from the guys what they did that day, even the semi-final.

We lost one goal in the full cup run and that was against Clyde at Stair Park. It was brilliant, fantastic.

Q: I imagine you would not swap the two weekend’s results? You would rather win a cup final and lose a league game.

Barney: Definitely. Definitely. I think we just managed to stay up at the end of that season. I think the last game was away to Stenhousemuir.

Q: However many years down the line, I imagine it is still a game which brings a smile to your face?

Barney: Definitely. I actually watched the highlights from the game about a fortnight ago on YouTube. Somebody pointed it out to me and I just sat and watched it on YouTube for the few minutes. It brings back memories.